The New Testament epistles inform us that the original Gospel was a revelation from God. That means it did not originate by means of spoken tradition relayed from historical events, by word of mouth, from eyewitness or preacher to others. Rather, one might almost say that the medium itself was the message: the revelation or vision was, in a significant sense, the Gospel and conversion experience.

Thus Paul — thought by some scholars to be the real founder of Christianity — says that he was not taught the Gospel by men. “In Galatians 1, Paul claims that he did not receive the gospel from a human source. . . . In Galatians Paul speaks of his conversion as a revelation (apocalypse [1:12])” (Segal, 1990: 35, 36)

I did not receive it from any man, nor was I taught it; rather, I received it by revelation from Jesus Christ. . . . But when God, who set me apart from my mother’s womb and called me by his grace, was pleased to reveal his Son in me so that I might preach him among the Gentiles, my immediate response was not to consult any human being. (Galatians 1:12, 16) END_OF_DOCUMENT_TOKEN_TO_BE_REPLACED 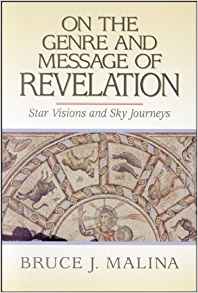 The task of helping a modern audience understand the book of Revelation, however, faces numerous obstacles. As is the case when working with all ancient documents, the obstacles derive not from the book of Revelation itself, but from both nonprofessional and professional students of the Bible who bring their own scenarios to their reading of the book (see Malina 1991). On the other hand, the historically minded interpreter must overcome  the nonprofessional’s uncritical acceptance of spurious information both about the genre or type of the work and about the experience it purportedly describes. For many nonprofessionals the book of Revelation has become a repository of predictions concerning the end of the world. This has been a quite common perspective ever since Pharisees and Christians sought to determine the “true” age of creation to determine the beginning of the seventh millennium — the Sabbath of the cosmos (see Landes 1988). (p. 10, my emphasis and paragraphing, links are to the Google-book previews.) END_OF_DOCUMENT_TOKEN_TO_BE_REPLACED