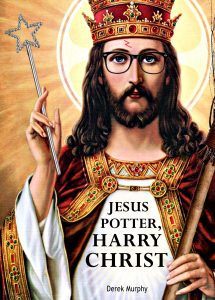 This post covers the final chapter of Derek Murphy’s Jesus Potter Harry Christ. All chapter by chapter reviews are collated here and on the Jesus Mysteries discussion group. I will do one more overview review of the entire book, but that may not be on this blog, but on amazon or such. A special thanks to Derek Murphy for sending me a review copy. His book has opened up for me a broader perspective on the question of Christian origins than I had till now been used to. (Recent posts on the place of “astronomics” in the ancient world may have been prompted by questions Derek Murphy has raised in my mind.)

Having argued in the preceding chapters that Christianity began as another type of mystery religion, or really a spread of “interactive and heterogeneous communities”, and not with a historical Jesus, Derek Murphy in this final chapter explains why such “mystery” type religious communities were displaced by something quite different based on a belief in the historical truth of the Jesus narrative. Murphy shows that the rise and spread of what became the orthodox Christianity that we know had very practical political and psycho-social causes, and can hardly be said to be the result of any miraculous forces. One of the main sources Murphy draws upon for this chapter is the reputable The Rise of Christianity by W.H.C. Frend.

The message of the literalness of the Jesus story was simple to grasp. Its message was uncomplicated: have faith in this historical event. Justin Martyr, for example, as Murphy points out, describes his conversion to Christianity explaining that its attraction lay in it being a much simpler set of understandings than other complex philosophies of his day. END_OF_DOCUMENT_TOKEN_TO_BE_REPLACED