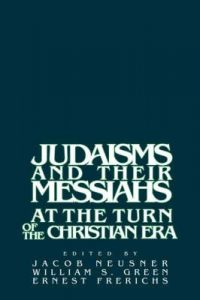 It is standard practice to classify Jewish messianism as national, ethnic, political and material, and to mark Christian messianism as universal, cosmopolitan, ethical and spiritual. That Jewish anticipation of the messiah’s arrival was unusually keen in first century Palestine and constituted the mise en scène for the emergence of Christianity is a virtual axiom of western history. (p. 1 of Judaisms and Their Messiahs, my emphasis)

But there is little, if any, evidence for this “axiom of western history”!

The opening chapter of Judaisms and Their Messiahs at the Turn of the Christian Era, though over 20 years old, appears not to have been read or accepted among theological and other scholars who even now still argue that the generation of Jesus was possessed by expectations of a messianic deliverer. Many such scholars still argue strenuously that some of that generation reinterpreted the life, execution and post mortem psychic experiences of their renowned rabbi, Jesus, as the life, death and resurrection of the long-awaited (but spiritual) Messiah. Sometimes even professorial insults will be directed at less learned individuals who dare question, and persist in asking to be shown, the hard evidence for this model.

But professorial insults notwithstanding, William Scott Green (the author of that opening chapter) is several times quoted in relatively recent publications by the renowned Thomas L. Thompson:

These arguments [for a general Jewish expectation of the advent of a Messiah around the time of Jesus] . . . appear to suggest that the best way to learn about the messiah in ancient Judaism is to study texts in which there is none. (Green in Judaisms and Their Messiahs . . . p. 6)