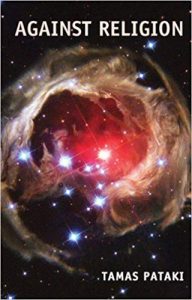 I’ve tried to bottle a few of the passages that struck a chord with me below, but more for my own record. Read the full article at the above link.

Atheism and Opposition to Religion

The Australian philosopher Mark Johnston, for example, has recently described Dawkins, Hitchens and Harris as “undergraduate atheists,” and rebuked them for their simple-minded conceptions of deity and their insensitivity to the complexity of religious experience.

To be honest, I have some sympathy with these complaints. Our leading atheists have not attended to, are probably not even aware of, the (admittedly abstruse) conceptions of god that mostly preoccupy philosophers and theologians today. (I think myself that this theology is crummy but that is not the point.)

More importantly, many atheists’ views about religious motivation and experience do seem to me crude and unnuanced. But I think that these lapses don’t matter much once placed against the backdrop of what most troubles us atheists.

The fact is that the popular contemporary atheism which is gaining momentum today is not principally about atheism at all – as I have austerely defined it. It is about opposition to religion or, more exactly, to the malign influences of religion, especially its menace to secular, humane values and untrammeled rational inquiry.

Atheism is one thing, opposition to religion quite another.

For my part, though I hold religion to be an evil, I am not convinced that a world without religion would be better, all things considered, than a world with it.

I do advocate a religionless world and I believe that the cultural achievements of secular humanism and rational inquiry must be defended with the utmost energy against the violent and mindless religious depredations of our time. But it is by no means obvious that an entirely religionless world is desirable, even if it were possible.

Atheism is not a religion. . . .  it is not even a system of thought – it is a well justified belief, a premise. What follows from it depends on the premises conjoined to it. . . . .

The premise that I would conjoin is that human beings remain forever mutually dependent creatures who need to feel loved and to show love. . . .

This life, with our fellow mortals, that we shape by our actions and attitudes, is the one that matters. To recognize this is to embark on one path to humanism.

It must also be borne in mind that contemporary humanism is a complex stream with some tributaries quite unconnected to atheism.

Christian thinkers had lately noticed the text in Genesis about Man being made in God’s image, and at about the same time the conception of the suffering Christ, as well as the cult of the Virgin Mary, penetrated from the Eastern to the Western Church and dominated the Christian imagination.

So, paradoxically, Christianity, which extolled transcendent ends beyond human flourishing, paved the road towards humanism.

But these different sources are united by golden thread – such as the conviction that each individual human life is precious, and that human flourishing and happiness in this world matters, and that flourishing requires a mutuality of care, beneficence, understanding, and that to harm others is to harm oneself.

Let me try to capture all of these noble thoughts within a single word – “humanity,” or even “humaneness.”

But it must be emphasized that this humanity of humanism is inclusive. Its benevolence, attentiveness and sympathetic understanding must rain on the irreligious and the religious alike.

The obligation of the humanist atheist towards the religious

Of course, the sympathetic understanding of some of the religious is not always easy. It would be easier if all religious believers were able to distinguish between who they are and what they believe, and could always recognize at least the possibility that their beliefs may be built on sand.

And it is impossible to respect beliefs or opinions that one considers to be nonsense or pernicious . . .  . But there is a difference between respecting a belief and respecting the person who holds the belief – and the majority of the religious do not fall into the categories of the violent or foolish.

There are in fact many different motives to religion, and different degrees of commitment to it. Religious affiliation is sometimes quite superficial, but is often indicative of profound psychological needs or irresistible social forces or deeply muddled reasoning – reasoning which may itself be a product of the psycho-social needs and forces.

The humanist atheist is obliged to try to understand the complexity of religious experience, and the social conditions, human needs and unconscious wishes that give rise to it – for religion can go very deep indeed.