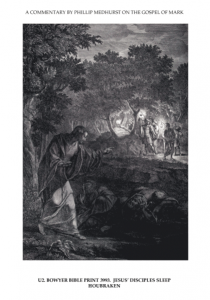 This post concludes the series of posts covering Strelan’s argument that Mark’s disciples are based on Enoch’s Fallen Watchers.

The Mount of Olives was “sacred space” for the author of the Gospel of Mark. This was the place where Jesus took Peter, James and John into to the revelation of the mystery of the signs — Mark 13:3 (the Little Apocalypse/Olivet Prophecy).

Called to Watch, but “like children of the earth” fall asleep

So for the fourth time (see previous post for the previous 3 times) Jesus takes Peter, James and John aside to be “with him” – (14:33). These three are thus appointed to stay awake with Jesus, just as Watchers are ordained to be awake in the presence of the Lord day and night.

Faithful watchers do not sleep.

2. And on the four sides of the Lord of Spirits I saw four presences, different from those that sleep not

7. And round about were Seraphin, Cherubic, and Ophannin:
And these are they who sleep not
And guard the throne of His glory.

Here on the Mount of Olives Jesus addresses his head disciple by his real name, Simon, (not “Peter”), “thus suggesting the ambiguity of their relationship”. This is the same Simon who, in Mark 1:36 (as addressed in my previous and earlier posts) had, along with those “with him”, pursued (with hostile intent) Jesus, to turn him away from the desert place where he had gone to pray.

Now again we find Jesus alone praying. This time, however, Peter lacks the strength to pursue him aggressively, and falls asleep instead. The disciples, like the “children of the earth”, fall asleep. Jesus exhorts them to “watch and pray” (14:38) lest they enter temptation.

Jesus alone is the true “son of the father” (14:36), or son of heaven. His disciples show themselves to be, instead, sons of the earth.

The Watchers of Enochian legend fell as a result of their attraction to the flesh.

Jesus warned his disciples not to “enter into temptation”. This phrase has its parallel in earlier phrases in Mark speaking of “entering into the kingdom”. “Both imply movement into a realm, a situation or state of existence.” To enter into temptation is to enter into a realm of testing. Enoch’s Watchers entered this realm when they came down to earth and loved the women whom they took as wives and to whom they bore children. In their temptation they acted like “the children of the earth”.

The fall into temptation, within the context of the Watchers, is to think like humans, to seek human status and reputation, to save face, to save one’s own life, to follow the dictates of the heart, including the evil eye and adulteries.

The Watchers were ordained to be “with God”, but instead they chose to be “with humans”, with flesh and blood, and accordingly they became weak and prone to death. This is what is meant by “the spirit is willing but the flesh is weak”. It is about much more than simple physical weariness.

The desire of the eyes

Mark focusses on the eyes here in particular, but also throughout the gospel. He is the only evangelist to list the “evil eye” (7:21) as one of the sins of the human heart.

The disciples’ eyes are “very heavy” (Mark 14:40). Strelan notes here that sleep in some early Christian literature is associated with works of darkness and death. Ephesians 5:14 is a call to “Awake, O sleeper, and arise from the dead”; and 1 Thessalonians 5:6-7 sees sleep as being, like drunkenness, a sign of belonging to this world.

In this context, to be asleep is to belong to this world, unlike the holy Watchers who never sleep.

Strelan additionally notes that in the Christian tradition desire leads to sin and death (James 1:14), and that desire is closely associated with the eyes. Thus in 1 John 2:16 one finds the desire of the eyes being coupled with the desire of the flesh, and both being “of this world.” Similar associations are found in the Community Rule of Qumran.

And, of course, the desire of the eyes is sometimes sexual: Matthew 5:29 and 2 Peter 2:14. This was the sin of the Watchers — the attraction between the Watchers and the women had to do with the eyes of both.

So Strelan sees the significance of the eyes increasing in the episode of Peter’s denial.

Like the Watchers in 1 Enoch 13:5, the disciples do not know what to say (Mark 14:40) when faced with Jesus who catches them sleeping. (Mark alone makes this observation, and recalls his similar descriptor at the transfiguration: 9:6).

Peter first goes into the courtyard of the high priest, but as Jesus is being abused, Mark tells us that Peter is “down below” (Mark 14:54, 66).

As Peter now enters the realm of “temptation” of which he had been warned, he is said to be in descent (κατω), like the Watchers who descended to earth (οι καταβαντες) in 1 Enoch 6:6.

Strelan contrasts this uniquely Markan “down” location of Peter with the elevation of Jesus as the Son of Man who sits at the right hand of God and comes with clouds of heaven (14:62). In 1 Enoch the contrast is between the angels who descend to earth and Enoch who is called by the faithful Watchers to ascend from earth to heaven.

The legend of the Watchers being attracted to the “daughters of earth”, or in some versions, the women attracting or seducing the Watchers, has been seen as a disguised attack on the Jerusalem priests and their intermarriages.

Strelan sees the two themes of women and priesthood in Mark’s account of Peter’s descent.

So when the bondwoman of the highpriest sees Peter, Mark very distinctly stresses the act of her looking and seeing (3 references in 14:67, 69). Only this bondwoman is said to look so intently, or look at all. Other bystanders who engage with Peter are not so described. And the other synoptic gospels omit this Markan emphasis on the woman intently gazing at him. Strelan again reminds readers of Mark’s unique inclusion of “the evil eye” among the sins of the heart (7:21).

So what is the significance of this bondwoman? Mark alone describes her as the servant of the high priest. Likewise, he alone says that the servant whose ear was cut off was a high priest’s servant (14:47). But this woman is one of a number of bondwomen belonging to the high priest (14:66).

Strelan cites Hillel (m. Abot 2.7) saying that wherever bondwomen increase, so lewdness increases; and Jeremias who claimed that “every freed woman slave was regarded ipso facto as a harlot!” High priests did have slaves (Josephus, Ant. 20.181, 206) and wealthy Jews had them, including female servants (Sir. 7.21; 33.27-33; Jdt 8.7; 16.23; Sus. 15). And finally, “according to Jubilees, the fact that people had slaves was an indication of evil and an indirect cause of the Flood (11.2)”

So now at Peter is entering the realm of temptation, the temptation meets him in the form of a woman associated with the high priest. So Peter is in the courtyard of the high priest, and the audience has just heard that the high priest has torn his clothes and accused Jesus of blasphemy.

So Mark has portrayed Peter as coming into the association with the priests and their servant women. Jesus had called him to be a Watcher and serve as a priest-angel. But Peter now denies that calling.

Strelan also wonders if some readers would have associated Peter’s own oath-making (14:71) with the oath of the fallen angels pledging to enter into illicit unions with the daughters of Earth (1 Enoch 6.5).

Thus the last word spoken in the gospel by a male disciple is a word of denial.

Strelan dismisses scholarly attempts to learn whether there really were roosters in Jerusalem at this time, or how to link the crowing with watches of the night. Rather, the detail serves to highlight Peter’s fall.

The rooster in some Jewish traditions learns from the angels the time for rousing humans to continue the praise of God after the angels have left off. Peter, as a watcher-angel, is called to continue the praise of God, but he denies his call like the legendary Watchers. The cock crows in praise and calls Peter to praise; Peter denies. Praise and watching go hand in hand (e.g. Ps. Sol. 3.2). . . . One tradition held that the rooster sang seven psalms as it crowed its morning praise and the second crow of the rooster was the same as the first: ‘Lift up your heads, ye mighty gates’. Instead, Peter’s head falls or he falls upon the ground and weeps.

Again, like the shamed Watchers, he cannot lift his head.

So Strelan sees no repentance for Peter at this point. He rather sees Mark as ironically turning the Enoch tale around at the end. Where Enoch delivered the message of eternal punishment to the fallen Watchers, it is in Mark the women(!) who are sent with a message of hope of redemption for Peter.