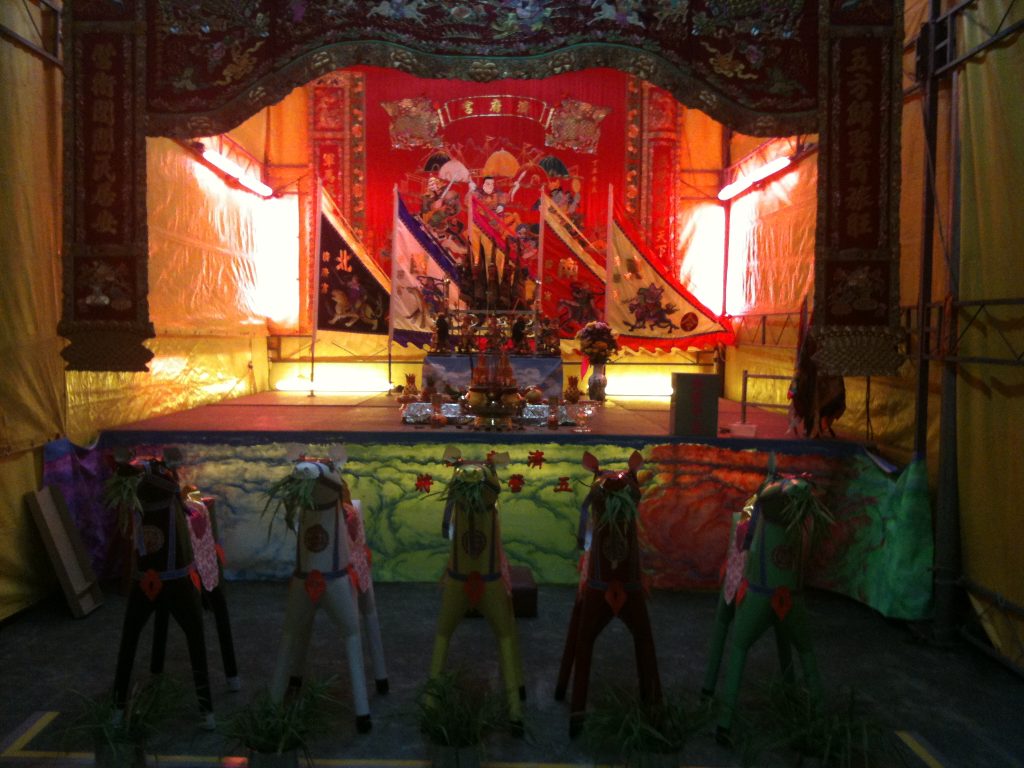 I am fascinated by other “foreign” ceremonies. They invite comparisons with the ones with which we are familiar, and help grasp a bigger picture of what “it” is all about.

My days in Singapore are numbered as I look forward to a new position back in Australia, so I was very glad when some Chinese locals went out of their way to encourage me to attend the opening ceremony celebrating the birthday of one of their gods. This one happened to be at the Aljuneid locale (suburb? district?) of Singapore. (Aljuneid also happens to be an Arab name — Arabs, especially from Yemen, have a long history of ties with Singapore, and I happen to work with one of the Aljuneid descendants here.) I asked the local Chinese who encouraged me to attend the ceremony for the name of the god, but was met with uncertainty as to how to convey something apparently uniquely Chinese in a meaningful way to me in English. So I can’t say what god(s) the following videos depict.

It seems to me that somewhere in Singapore there are temporary marquees being set up every week for the purpose of celebrating a local society’s or community’s particular god’s birthday. One night is for the opening ceremony, another for a community meal, and yet another for entertainment. (The decorative detail — its colour and intricacy — of all the paraphernalia is astonishing. Maybe I can post some photos later.)

I have the impression that the community meal is also routinely accompanied by entertainment in the form of Chinese opera. But the Chinese audiences for this, from my few experiences, are far fewer than those for the modern pop entertainment on the final night. Some of my younger Chinese work colleagues have expressed some astonishment that anyone could sit through and enjoy a Chinese opera. I do have to admit the audiences to these that I have observed are a small number from the older generation, plus me. But the community meals also come with auctions and/or raffles that seem to keep the many scores of diners happily entertained.

But last night was the first time I had the experience of witnessing the opening night ceremonies of a local god’s birthday. It was a lengthy process, two and a half hours no less, but I enclose here only two of the videos/photos I captured.

The first video depicts the moment that the god enters his human medium. If interested, you might want to fast-forward the first 50 or 60 seconds.

There are two others sitting on lesser thrones either side of him. The one on the right is dressed in pink and yellow pantaloons — he will later be possessed by a “child deity”, I presume, since he drinks milk from a baby bottle and sucks on an infant’s dummy. But he and his companion are possessed by the god after the chief god enters the one in the centre.

The second video captures a moment that left me sickened for a while. The one possessed by the lead god takes a sword and proceeds to use it to draw blood from his tongue! At the time it crossed my mind to wonder if he was even going to cut some of his tongue off! Some form of blood sacrifice and religion seems to be a universal. But the blood that covered his mouth and cheek was used to stamp some sorts of “sacred” writings. Near the end of the ceremony (long after this particular video) these blood stained texts were handed out to devotees who rushed forward with outstretched hands for them. In the meantime, some of these were glued to other pillars, tables and banners in the area.

In one of these videos you will see the pink-pantalooned medium possessed of a “baby god” hopping by. Later on in the ceremony he sat down and children and infants flocked to him as he handed out sweets. An elderly Chinese gentleman, observing my interest, urged me to hold out my hand for those sweets, too, telling me they would bring me good luck. He was so insistent, and when people made way for me to do so, the pink-pants possessed one merely shouted in his high pitched “possessed” voice, “Children!!” I was hardly a child so was disqualified. But he offered me an out by removing the infant’s dummy from his mouth and offering it to me to suck. Everyone around laughed at the gesture, and the “possessed” one did relent and handed me three pieces of candy anyway!

Maybe in a later post I can link to the dragon dancers, the young children’s fascination with them, and a few other happenings.

But here are the two videos I spoke of.

This one culminates in the centre person, sitting on the most ornate throne, finally being “entered” by the chief god. Two others are preparing to be entered by companion deities subsequent to the first “possession”. Recommend a full-screen or large-screen view to see the muscular contortions and other physical effects he undergoes. If you are easily bored you might be advised to fast forward the first minute or so.

This video shows the two “assistant/accompanying” gods “entering” their respective mediums after the chief god has entered the primary one. But what really affected my guts at the time was his use of the sword to draw blood from his tongue — enough to cover his cheeks. For a moment I was really wondering if he were about to cut off some of his tongue. The blood is used to stamp various “sacred”(?) writings. At the end of the ceremony these were handed out to devotees rushing forward to take one. In the meantime, a few were used to be glued to tables, pillars and banners that were located around the pavilion.

Near the end one also sees the “child god” leading his medium to kind of “hop” in a diminutive way to an area of the marquee representing “paradise” or “heaven”. More on that later.