In my two latest posts attempting to epitomize a couple of aspects of R. Joseph Hoffmann’s thoughts as expressed in his introduction to Goguel’s Jesus the Nazarene, I could not help but be struck by Hoffmann’s remark that a reason for the scholarly debate over Jesus mythicism was largely a desperate response designed to salvage the basics of Christianity itself from the direction in which liberal theology was veering. It was one thing for scholars to jettison a miracle working Jesus, but they could not do without the ethical teacher. At least that latter had to be defended at all costs, and so the mythicist debate was left behind in the dust.

Hoffmann recently corrected me (rightly) when I ignorantly misrepresented the reason for his republication of Goguel’s book (I had not read his book at the time), but in doing so he opined that the reason the Jesus mythicist debate is less prominent than it perhaps deserves to be in academia has more “to do with academic appointments (as in security thereof) rather than common sense.”

On both counts, here, — the ideological reason for jettisoning serious continuation of the mythicist debate, and career threatening political correctness — one begins to understand why Jesus historicists who repeatedly shout that the mythicist question was “finally settled and fully rebutted” long ago never seem to accompany their war cries with evidence, citations, publications. Just shouting loud and long (with crude insults and misrepresentations as repeated refrains) that the debate was settled long ago and only looneys persist to ask questions about it seems to be sufficient assurance for some historicists. END_OF_DOCUMENT_TOKEN_TO_BE_REPLACED 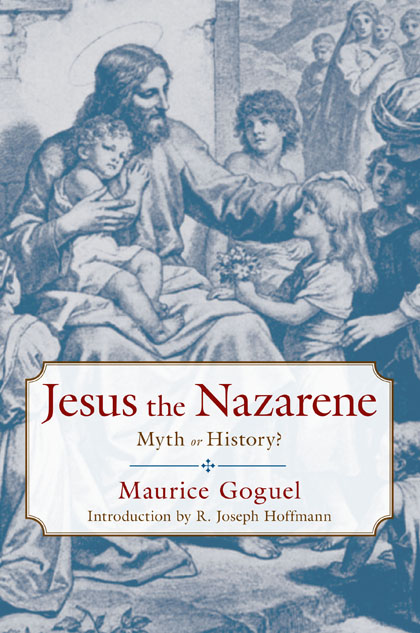 This post addresses R. Joseph Hoffmann’s discussion of Maurice Goguel’s 1926 defence of the historicity of Jesus in response to the early mythicist arguments, initially launched by Bruno Bauer in 1939, and developed in particular by Reinach, Drews and Couchoud. Hoffmann divides Goguel’s defence (Jesus the Nazarene: Myth or History?) into the following six sections. I have attempted to epitomize Hoffmann’s responses to each of the core arguments of Goguel for historicity. I have clearly indicated where I have departed from my understanding of Hoffmann’s own words and introduced my own comments.

When I started this post I half expected it to become a response to historicist arguments in general, hence I sometimes speak of “some Jesus historicists” where Hoffmann is specifically addressing Goguel himself.

1. The notices of opponents

Goguel suggests that Christianity was recognized by outsiders at least from the time of Tacitus (55-120) and none of its opponents doubted the existence of Jesus.

Tacitus, even if his report (Annals 15.44) is authentic, is reporting on the teaching of the cult and not on historical records he is attempting to verify.

None of the pagan critics of Christianity cast doubt on the historicity of Jesus “for the simple reason that after the second century –the first age of Christian apologetics — the story was regarded as a canonical record of the life and teachings of an authentic individual, thus to be refuted on the basis of its content rather than the details of its historical veracity.”

The earliest official report referring to Christianity, the letter of governor Pliny to Emperor Trajan (111 ce), “knows nothing of a historical Jesus, only a cult that worships a certain Christ as a god (quasi deo).

Other critics such as Celsus, Porphyry and Julian found the idea of the historicity of Jesus a point in favour of their attacks on Christianity. They could mock the insignificance (not the nonexistence) of the Christian founder.

The inconspicuousness of Nazareth also lends credence to the myth theory. Was Jesus “the Nsr/Nazorean/Nazarene/Nazaraios” (my own variations of the word mixed with Hoffmann’s here) originally a divine name, as in Joshua the protector or saviour? Compare Zeus Xenios, Hermes Psychopompos, Helios Mithras, Yahweh Sabaoth. The evangelists appear to struggle with placing the name as a geographical locality in their gospels. Opponents were happy to associate Jesus with an insignificant town, but Hoffmann’s point is that the confusion over this epithet is embedded in the earliest debates over whether it was a local or a divine title.

The various docetic views held that Jesus was not truly flesh, but a spirit, perhaps only appearing as a flesh and blood human. Some Jesus historicists have argued that when orthodox Christianity combatted these views, they were indeed affirming the historical reality of Jesus.

But this misses the point of what the debate was about. The issue was not whether Jesus had lived in the time of Pilate, but about the “materiality” of Jesus — was he manifest as real flesh and blood or only an apparition.

The existence of such docetic views among a range of Christian groups may well have been vestiges of some “pre-Christian” Jesus myth. But those arguing for the historicity of Jesus have focussed only on the orthodox response to docetic views, without really addressing the full complexity of its implications.

Is is not a myth the church was refuting in attacking Docetism; it was the belief that Jesus was of a different order of reality than the dichotomous reality it attributed to him as both god and man. Church fathers such as Irenaeus and Tertullian will accuse the Gnostics of believing in a phantasm, an apparition, a ghost, a spirit, in order to malign their opponents’ denial of the physical Jesus, but at no point do they accuse their enemies of creating a deception or myth. (pp. 26-27)

3. Paul and the Gospel

Opponents of the mythical Jesus idea have claimed mythicists make far too much of Paul’s silence on the details of the earthly career of Jesus. END_OF_DOCUMENT_TOKEN_TO_BE_REPLACED