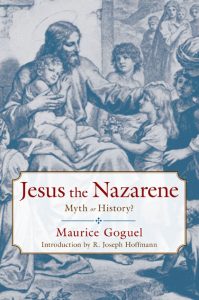 R. Joseph Hoffmann has in interesting introduction to his (re)publication of Jesus the Nazarene by Maurice Goguel in which he discusses some aspects of the early history of Jesus mythicism. He notes that the theory that Jesus had never lived at all was first broached in the nineteenth century. He cites three reasons why some scholars held this belief.

The evidence of the earliest Christian literature

Paul’s letters, being the earliest Christian literature, are completely silent about Jesus as an historical figure. For Paul, Jesus is Christ the Lord who died for sins and offered forgiveness and immortality for those who believed in him.

There is little — one almost has to say no — reference in these letters to a Nazarene who taught by the sea of Galilee, healed the sick, and spoke in parables about the end and judgment of the world. There is next to nothing, and certainly nothing on the order of a historical narrative, about a public crucifixion and resurrection, merely a reference to “deliverance,” death and resurrection as events of his life (see Galatians 6.14) which were understood to have bearing on the life of believers within the cult of “church.” (p.15)

Hoffmann then cites the Philippian hymn (2.5-11) that “seems to locate these events in a cosmic dimension that bears closer resemblance to Gnostic belief than to what emerges, in the end, as orthodox Christianity.”

The only datum in Paul’s writings that appears to have any significance for Christians is belief in the bare fact of Jesus overcoming death in order to give believers confidence in their own salvation.

While the whole meaning of Christian “faith” was predicated on the acceptance of a single event located in time (Paul does not specify the time, and seems to have an eschatological view of the days nearing completion: Romans 8.17-20), the earliest form of Christianity we know anything about yields not a historical Jesus, but a resurrection cult in search of a mythic hero. It found this in the divine-man (theios aner) cult of Hellenistic Judaism.