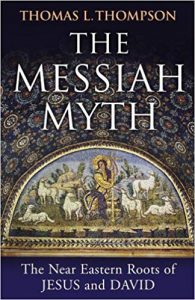 Thomas L. Thompson’s The Messiah Myth can be a somewhat mystifying read for anyone looking for an engagement with conventional historical Jesus studies. It can leave a reader who is looking for a repeat of this scholar’s demolition of the historicity of the biblical Patriarchs and Kingdom of Israel even more flummoxed. In his first chapter he explains:

The purpose of this book is not historical reconstruction. Nor is it centered in the problems of the historical Jesus. (p.16)

It is about the influence of the ancient Near Eastern figure of the king in biblical literature, and this has much to do with how figures such as Jesus are created.

So Thompson is addressing Jesus as he has been created out of this Near Eastern literary figure, and not a historical figure behind the gospels.

Thompson sees no evidence for a historical figure. He critiques historical Jesus studies since the days of Schweitzer for “lack of clarity” in the method by which scholars have approached the gospels and attempted to find in them historical information.

On the one hand [Schweitzer] assumed that Jesus existed apart from the gospels and on the other that the gospels were about this historical person and reflected his beliefs. This lack of clarity in method supported the radical separation of a Jesus of history from the Christ of faith. (p.8)

Thompson sees an even more profound error in what he believes is a prevalent misreading of the apocalyptic images in the Gospels. This is something I am still thinking through. I am waiting to read Amos and the Cosmic Imagination by James Linville (to get a different but presumably related perspective from Thomspon’s — meet Dr Jim [Link //drjimsthinkingshop.com/about/ and blog is no longer active… Neil, 23rd Sept, 2015]) as part of my attempt to grasp the rationale for understanding apocalyptic language as something other than an expression of literal beliefs in apocalyptic scenarios. Will return to this question at the end of the post.

That the stories of the gospels are about a historical person is a difficult assumption. To what extent does the figure of Jesus — like the figures of Abraham, Moses and Job — fulfill a function in a narrative discourse about something else? Is Jesus rather — like so many other great figures on ancient literature — the bearer of a writer’s parable? The question does not refer to our knowledge of a historical person. It asks about the meaning and function of biblical texts. (p.9)

This question — what is the meaning and function of the gospels — is one Thompson addresses in The Messiah Myth in a way that few other scholars have done. Certainly historical Jesus scholars acknowledge the Gospels are theology and faith-messages. But they also assume they are records of oral traditions traced back to a historical event, and in so doing they violate the very basics of scholarly historical enquiry by reconstructing Jesus and early Christianity upon an untested and unquestioned assumption. Thompson argues that Gospels are born not from a set of unique oral traditions, but from a well established literary matrix traceable back through centuries and millennia.