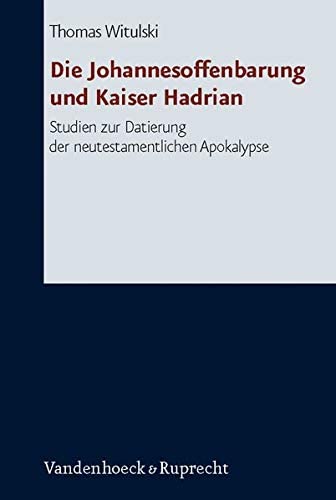 Thomas Witulski steers the reader from Rev 13 back to the letters to the seven churches to demonstrate what was facing the various churches at the time of Hadrian. But since the question of how W. interprets the seven heads, five fallen, one is, etc. has arisen, I have chosen to skip ahead to W’s analysis of chapter 17. But I’ll cover it in a series of small posts, one bite/byte at a time. That gives me the opportunity to consult the various citations and any additional material of relevance as I go.

Revelation 17:1 One of the seven angels who had the seven bowls came and said to me, “Come, I will show you the punishment of the great prostitute, who sits by many waters. 2 With her the kings of the earth committed adultery, and the inhabitants of the earth were intoxicated with the wine of her adulteries.” 3 Then the angel carried me away in the Spirit into a wilderness. There I saw a woman sitting on a scarlet beast that was covered with blasphemous names and had seven heads and ten horns. . . . .

9 This calls for a mind with wisdom. The seven heads are seven hills on which the woman sits. 10 They are also seven kings. Five have fallen, one is, the other has not yet come; but when he does come, he must remain for only a little while. 11 The beast who once was, and now is not, is an eighth king. He belongs to the seven and is going to his destruction.

In Revelation 17 we read of “the great whore”, interpreted in verse 18 as the city of Rome, sitting upon a scarlet-coloured beast, full of names of blasphemy, and having seven heads and ten horns.

. . . and I saw a woman sitting upon a scarlet-colored beast, full of names of blasphemy, and having seven heads and ten horns

The seven heads of that beast are interpreted as the legendary seven hills of Rome:

17:9 And here is the mind which hath wisdom: The seven heads are seven mountains on which the woman sitteth.

But there is a double meaning because the next verse points to seven kings:

Kings are not necessarily emperors but the word here for kings, βασιλείς, was used for emperors by the time of Hadrian:

The term βασιλείς, usually translated “kings,” and the most elevated tide of Hellenistic monarchs, can equally well be translated “emperors.” However, βασιλεύς is not widely used as a Greek translation of the Latin term imperator, “emperor,” until the second century A.D.  — (Aune, 946 — quoted in part by W., 323).

In the above quotation, Aune is referencing Greek Terms for Roman Institutions: A Lexicon and Analysis by Mason. Here is the more complete account by Mason:

By the second century A.D., αύτοκράτωρ as a general word for “emperor” came under challenge, especially in literary works, from βασιλεύς. Although Dio, for example, always used αύηοκράτωρ and never βασιλεύς, in other writers both terms are used indiscriminately, as in a phrase in Philostratus (VS 1.24 fin.), Άδριανός αντοκράτωρ . . . enιτηδειότατος των βασιλέων. Both words are found in such authors as Appian, Aristides, Dio Chrysostom, Galen, Herodian and Lucian. . . . .

βασιλεύς is applied to the emperor in verse as early as the time of Augustus, in a poem of Antipater of Thessaly (AP 10.25). But in prose, βασιλεύς is not employed before the second century. . . .

But derivatives of βασιλεύς are in use by the time of Plutarch, βασιλεύω occurs in the case of Vespasian ([Plu.] Amatorius 25.771), βασιλικός is used for the gardens of Lucullus (Plu. Lucull. 39.518). Josephus twice employs βασιλειάω to describe would-be emperors (BJ 1.5, 4.546), and speaks of the βασιλεία of Vespasian (BJ 5.409).

βασιλεύς and related words begin to occur in inscriptions, though not yet in formal titulature, about the time of Hadrian. Notable examples are a dedication to Σαβεινα βασίλισσα from Megara (IC 7.73), a decree of the Panhellenes dated to 131-138 A.D. which reads (line 9): [ὑπ]ό re βασιλέων αίιτοκρατόρων and a dedication naming Hadrian δεσπότης βασιλεύς Επιφανέστατος νεός ‘Ασκληπιός (IGRom. 4.341). (Mason, 119f)

Two quite different interpretations are given for the seven heads of the beast (v.9b-ll). The first equates the heads with seven mountains and thus refers to Rome, the capital city situated on the famous seven hills. The sitting of the harlot on the hills is a striking image for the fact that the city of Rome is the centre and power centre of the empire.  The second interpretation equates the heads with “kings”. This can only mean Emperors, for in the East of the Empire “king” was the common name for the emperor (cf. 1 Pet 2:13-17; 1 Tim 2:2). – (Roloff, translation from pp. 169f)

The author of Revelation in this chapter places the time of his writing during the reign of the sixth emperor.

And there are seven kings: five are fallen, and one is, and the other has not yet come; and when he cometh, he must continue a short space.

“he is the eighth and is one of the seven and is headed for destruction.” . . . . There is widespread agreement that this king does indeed represent Nero and reflects the Nero redivivus legend . . . .  The symbolic significance of the number eight is relevant since the beast is called the “eighth.” In early Judaism and early Christianity, eight has eschatological significance since it represents the eighth day of the new creation after the seven days of the old creation have concluded (2Enoch 33:1-2; Bam. 15:9), and Sunday in early Christian tradition is occasionally called the eighth day (Barn. 15:9; Justin Dial. 24.1; 41.4; 138.1; see Bauckham, “Nero,” 396-97). . . . — Aune, p. 950

The final beast to arise, the one to be destroyed in the final cosmic battle, is the eighth — which, curiously, is said to have once before ruled in the past.

And the beast that was, and is not, even he is the eighth, yet is one of the seven and goeth into perdition.

We met this eighth beast, the one to arise in the end time, in chapter 13. We have seen the reasons for believing that the author intended readers to interpret that beast, Hadrian, as the restored Nero from the past. There, however, the author spoke of that beast in the present tense while in chapter 17 he is said to yet come.

The apocalyptic visionary is caught in a bind. While in chapter 13 he spoke of the end-time beast as present and known to his readers, in chapter 17 he strives to claim he belongs to the prophetic future. We will return to this back-dating in a later post.

W. observes another comparison between the two descriptions of 13 and 17. In both chapters, the visionary begins by presenting a figure representing the Roman empire as a whole (13: the seven-headed beast arises from the sea; 17: a woman riding the seven-headed beast thus signifying their unity as the one empire) but in each case narrows the focus so that we come to read of an individual emperor.

What do we make of the ten horns?

Here the ten kings represent Roman client kings. Roman generals in the Greek east, particularly Pompey and Antony, developed an elaborate system of client kingship. Various kings and dynasts were sanctioned or elevated in order to serve as an inexpensive and effective means for controlling their regions, some of which were reorganized as provinces. – Aune, p. 951

The ten horns, following Dan. 7,24, are interpreted as ten kings (v. 12-14). These are not . . . Roman emperors, but vassal kings, or more precisely: political leaders and rulers who initially do not yet have kingship, but who receive it together with the beast, i.e. Nero redivivus, because they support him and place their power and influence at his disposal. We are dealing here with a variant of the idea of 16,14, according to which the beast wins the kings of the earth circle as comrades-in-arms for his goals through the demonic art of seduction. . . . Of course, the helpers of the beast will only have power “for an hour”, i.e. only for a very short time, because Jesus will defeat them.  – Roloff, translation of p. 171

Some scholars have thought otherwise and interpreted the ten horns as ten Roman emperors. W. disputes this view. Though in Daniel 7 the number 10 may be applied to supreme kings, it is evident that the author of Revelation creatively modified the various sources that he drew upon. We cannot assume that the interpretation in Daniel 7 should apply to Revelation. The same principle applies to another possible apocalypse known to the author of Revelation, 4 Ezra 11.  In 4Ezra the 12 wings are explicitly stated to be the 12 Roman emperors. In Revelation one reads that the seven heads are clearly seven emperors so we should not interpret the ten kings as ten Roman emperors.

We have begun here to compare Revelation with other apocalyptic writings of the time. I’ll go into details in the next post.