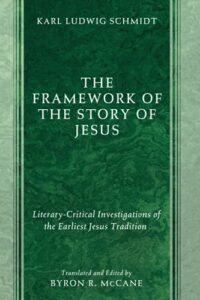 I bear glad tidings of good news. Karl Ludwig Schmidt’s magnum opus has finally been translated into English. The publication date is 2021, but I became aware of it earlier this month. The translator, Byron R. McCane was also responsible for the highly readable The Place of the Gospels in the General History of Literature, which is a good sign.

Schmidt became somewhat of a star in the world of biblical scholarship after the publication of Der Rahmen der Geschichte Jesu.  In it, he laid out the evidence for the nature of the framework in Mark’s gospel — namely that it was based on separate pieces of oral tradition, hung upon a mostly secondary structure. In previous decades, the theory of Markan priority among the synoptics had gained many adherents and eventually became the overwhelming consensus position.

Emboldened by that consensus, many scholars (mostly Protestant) attempted to write modern biographies of Jesus using the synoptics as their source material and leaning heavily on the second gospel for details concerning their chronology and topological itinerary. (This is what Schweitzer called Leben Jesu Forschung or “life of Jesus research.”) William Wrede and, to some extent, Albert Schweitzer demolished the idea that this was even possible. In The Messianic Secret (1901), Wrede sought to demonstrate that Mark’s overall narrative does not have a coherent narrative structure, but is instead arranged thematically and theologically. Julius Wellhausen in his analyses of the gospels came to the same conclusion, making the case emphatically in Einleitung in die drei ersten Evangelien (1905).

The foundations of form criticism

These predecessors laid the groundwork for Schmidt, who in Framework painstakingly analyzed the perocopae of Mark’s gospel and their related sections in Matthew and Luke. Rudolf Bultmann hailed the work as an impressive and important achievement which would provide the foundation for form criticism. On the other hand, conservative scholars, especially apologists in the English-speaking world, attacked it on various fronts. Probably the most well-known sustained attack came from Methodist minister David R. Hall. He criticized Schmidt’s assumptions and arguments in The Gospel Framework: Fiction or Fact?, a book you can read for free on archive.org.

For those readers not fluent in German, Hall’s book may have been a bit frustrating. Similar to the experience of reading Origen’s Contra Celsum, wishing than an extant copy of The True Word had survived for comparison, we wonder whether Hall has given Schmidt a fair shake. But now, after more than a century, we have an English translation.

I hope to post more on Rahmen in the coming weeks, as time permits, but for now I would like to offer a few words about translating German into English. In previous posts, I have sometimes translated Der Rahmen der Geschichte Jesu as The Framework of the History of Jesus. As you probably know, the word Geschichte means both story and history. However, I think our translator got it right with The Framework of the Story of Jesus, and the proof is in the subtitle: Literary-Critical Investigations of the Earliest Jesus Tradition. Schmidt is not offering up a strictly historical-critical work here. He’s staying, for the most part, on the layer of the text itself (in its disconnected pericope form), examining the textual clues related to the formation of the gospels from the received tradition.

Incidentally, the word Rahmen can mean both frame and framework. In Schmidt’s title, the latter is correct, but it could help explain the author’s perspective if we compare the mortar that surrounds the bricks of pericopae to the frames that surround paintings in an exhibition. A frame defines the perimeter of a work of art; it provides a transition between the painting and the world outside. In fact, one of the arguments for the nature of the tradition is the way each pericope is effectively sealed off from surrounding stories. Characters appear out of nowhere, never to return. They are isolated within their respective stories, captives within the frame.

“But nobody writes that way anymore”

Reading and understanding a foreign language is not identical to translating that language into one’s mother tongue. I can read a sentence in German and understand it, and yet be entirely dissatisfied with my English translations of it. The problem lies partly in the way words in different languages have different semantic ranges. It also stems from the fact that some ideas in one language can be quite difficult (if not impossible) to express in another. All linguists must deal with the fact that translations will inevitably lose some of their original meaning.

As I summarize The Framework here on Vridar, I will from time to time offer some alternative translations. I will not presume to call these “corrections.” As I said above, translating is a difficult task that always risks the loss of meaning and the muddying of authorial intent.

In the case of Schmidt, we also have the problem of dense, obscure scholastic German prose in which the translator can easily lose his or her way, wondering where and when who did what to whom. I am reminded of something Byron McCane wrote in his introduction to the translation of Die Stellung:

Schmidt coins new terms (Schriftstellerpersonlichkeit, for example), uses others in unusual senses (the Gospels, for example, were spröde against literary development), and then combines these words into sentences that at times become virtually trackless. At one point in the work of translating this monograph, for example, I was befuddled by a tangled sentence near the beginning of Part Two. After trying unsuccessfully for several hours to unlock its secrets, I took the text to my colleague, Prof. Erika Scavillo, a native speaker of German. After a few minutes of careful scrutiny, with furrowed brow and repeated muttering, she finally exclaimed, “Ah, so that’s what it says! Yes, now I see it. But nobody writes that way anymore.”

Schmidt’s motives for expressing himself in such a forbidding way belong to the history and sociology of German biblical scholarship, and I will not pursue them here. But the nature of his text poses a problem for the work of translation, not only because it is occasionally hard to determine exactly what he meant to say, but also because it is often difficult to render his German prose in clear English. It would be relatively easy to translate Schmidt’s daunting German into opaque English, but what would be the point of that? His arguments are broad-minded, creative, and intelligent, and as such they continue to deserve a fair hearing among the international community of New Testament scholars. With that consideration in mind, the primary objective of this translation has been clarity. The overarching goal has been to make Schmidt’s arguments accessible to those who may not have read them before. (McCane in Schmidt 2002, p. xxix-xxx, emphasis mine)

Schmidt’s prose is somewhat less formidable in Framework than in The Place of the Gospels, but the gulf between 21st-century American English and early 20th-century academic German is wide and spans some rather difficult terrain. For example, in the Vorwort, Schmidt wrote:

McCane translates this sentence as:

The significance of this book lies, it seems to me, in the fact that my studies of the complex of differences among the Synoptics, and between John and the Synoptics, will either succeed in establishing an entirely new outlook, or will fail utterly and thus end up making no difference at all. (Schmidt & McCane, p. xxiii)

The context may help clarify what Schmidt is alluding to. If, as he asserts, the frameworks in both John and the Synoptics are almost entirely secondary — i.e., originating with the gospel authors and their respective early Christian communities — then the modern squabbles over whether John’s chronology or Mark’s chronology is “more correct” are pretty much fruitless. With that in mind, I offer the following alternative translation:

The consequence of my research, I think, is that an abundance of specific issues arising from the complex of Synoptic and Synoptic-Johannine contradictions will either be reevaluated or discarded altogether as entirely superfluous.

[That translation is a combination of efforts, mine and my friend Marney Mason’s. He is a friend from the old days of Cold War intelligence — a linguist who’s much better than I could ever hope to be.]

Following Schmidt, we could simply say, “Yes, there are contradictions, but it doesn’t matter.” If the evangelists weren’t concerned about a painstakingly accurate historical chronology, then why should we fret over it? As proof of the fluidity of placement, we could note that Matthew and Luke felt free to move Mark’s pericopae here and there, as it suited them. Similarly, even if we might think John’s longer chronology seems more “plausible,” that doesn’t necessarily mean John had some greater contact with historical truth than the other evangelists. After all, they were concerned with theological truth above all else.

Not only can we not take an express train from start to finish, but each station along the way is yet another dead end.

A related issue comes up when Schmidt cites another German author. For example, he quotes Albert Schweitzer in the preface (Vorwort), and we must decide whether to use an existing translation or create our own.

Unfortunately, McCane relies on the 1966 (1968?) edition of The Quest of the Historical Jesus, which contains William Montgomery’s 1910 translation of the first edition, Von Reimarus zu Wrede. And so this quotation appears as:

Formerly it was possible to book through-tickets at the supplementary-psychological-knowledge office which enabled those traveling in the interests of Life-of-Jesus research to use express trains, thus avoiding the inconvenience of having to stop at every little station, change, and run the risk of missing their connection. That ticket office is now closed. There is a station at the end of each section of the narrative, and the connections are not guaranteed. (Schmidt 2021, p. xxiv, emphasis mine)

I really only have issues with the last two sentences. The partially new translation, edited by John Bowden and published more recently by Fortress Press, has a better rendition:

This ticket office is now closed. Each pericope is a station, and the connections are not guaranteed. (Schweitzer 2001, p. 299)

Bowden’s edition refreshingly unmasks the word “pericope,” discarding the clumsy circumlocutions introduced by Montgomery. Perhaps today’s conservative scholars truly do have no idea that the word “pericope” is not the invention of the form critics. Sadly, to discover the fact that Schweitzer used the word around two dozen times in Geschichte der Leben-Jesu-Forschung would require a few minutes of effort.

The only change I would offer is the translation of the word Schalter.

This ticket window is closed now. Each pericope is a station, and the connections are not guaranteed.

The metaphor reminds me of running madly across the train station platform, only to find a sign on the barred window that says, “Dieser Schalter ist nun geschlossen.” Not only can we not take an express train from start to finish, but each station along the way is yet another dead end. “Ticket office” isn’t wrong; however, “ticket window” seems to fit the image better.

In the next post, we’ll look at the introductory chapter in which Schmidt examines the problem of the framework, focusing on historical and methodological issues.

Schmidt, K. L., & McCane, B. R. (2021). The Framework of the Story of Jesus: Literary-Critical Investigations of the Earliest Jesus Tradition. Cascade Books.

Schweitzer, A., & Bowden J. (2001). The Quest of the Historical Jesus. Minneapolis: Fortress Press.

3 thoughts on “K. L. Schmidt’s The Framework of the Story of Jesus: Now in English!”