There was one little detail I forgot to add in my earlier post: Hadrian as Nero Redivivus. I set out the ways Hadrian emulated the popular Nero but a commenter has brought to my attention that I have not yet explained the 666 link between Hadrian and Nero that the author of Revelation called on readers to identify and reflect upon.

Here is wisdom. Let him who has understanding calculate the number of the beast, for it is the number of a man: His number is 666. — Revelation 13:18

Now everyone knows the name of “the man” Nero equals 666. Some manuscripts make his number equal 616. (See the linked article for details.)

But Revelation 13 speaks of a revival of the beast, a healed head-wound — a “second Nero” — if you will. Recall from our earlier post Corssen’s words:

So the apocalypticist says: the number of the name of the beast is the number of a human name. Does he mean to say: the name of the beast is the name of a human being, it is not an animal at all, but a human being, of whom I have so far only spoken allegorically as of an animal? That is the opinion of many commentators. But number and name are not necessarily identical, the same sum can consist of completely different summands and so the same number can give rise to different names.

When the apocalypticist says: “He who has understanding, calculate the number of the beast,” this is an impossible demand. For this calculation cannot be carried out without knowledge of the name. But in the demand lies the prerequisite that the animal as such has a name. If then the apocalypticist gives the number himself, which even the most intelligent could not have found in this way, it follows that the cleverness demanded does not consist in finding the tacitly presupposed name of the beast, but in deriving from its numerical value the name of a man of the same numerical value. In other words : the animal has a name x = 666, but 666 is equal to the name of a man, both names are, as it was called, ίςόψηφα [=isopsephy]. Thus the γάρ in άριθμός γάρ ανθρώπου ἐστίν [=it is the number of a man] comes to its meaning: one should calculate the number of the beast to find the equivalent name of the man.

With that in mind, notice that Hadrian’s name amounts to the same number as Nero’s:

The interpretation of the number 666 (Rev 13:18) on Hadrian was already considered by D. Voelter, [In his book published in 1885: Die Entstehung der Apokalypse] who adds the letters of the written Hebrew and on coins documented  name Trajanus Hadrianus as 666: “Hadrian officially carries as emperor on coins and inscriptions the name Trajanus Hadrianus. If now these names are written in Hebrew and the individual letters are converted into the corresponding numerical value, then exactly the number 666 comes out:

Now another Hebrew name form for Trajan is

If one puts this name form together with the name אדרינום and sums up the numerical values 285 + 331, then one receives that other number 616 handed down by Irenaeus.

So that would explain the comment by Irenaeus that some manuscripts claimed the number 616 instead of 666.

Thus, both the Hebrew-spelled name of the reigning emperor Hadrian and the Hebrew-spelled name of the figure of Nero redivus, קסר נתרן, can be calculated from the number 666, consistent with the isopsephic approach evidently underlying Rev 13:18. Thus, the apocalypticist implicitly identifies the currently reigning princeps Hadrian in Rev 13:18 with the figure of Nero redivivus and can at the same time prove to his addressees that in the figure of this emperor the expected Nero redivivus has truly appeared. (Die Johannesoffenbarung, p. 52 – translated)

Revelation 13:11 And I beheld another beast coming up out of the earth; and he had two horns like a lamb, and he spake as a dragon.

Thomas Witulski identifies this other beast that arises from the earth with the sophist Antonius Polemon. We introduced him in the post on emperor worship and Revelation. We know about him today from his own writings, from his ancient biographer Philostratus and from various inscriptions in Smyrna and Pergamon. Polemon was the descendant of the last king of Pontus, Polemon II. He trained as a sophist and rhetorician in Smyrna, became a diplomatic envoy on behalf of Smyrna in Rome, taught rhetoric himself and sometimes acted as a court orator. His school for rhetoric attracted some fame for his city and youth from Asia, Europe and the islands crowded Smyrna to learn from him. He was made a guardian of temples and a priest of Bacchus (Dionysus) and made head of the running of the games in honour of “Hadrian Olympus”. He accompanied Hadrian on his journeys through Asia and appears to have acted as a highly valued and influential advisor to the emperor.

Revelation 13:12 It exercised all the authority of the first beast on its behalf, and made the earth and its inhabitants worship the first beast, whose fatal wound had been healed.

The author of the apocalypse introduces him as a speaker in the service of the first beast. The classicist G. W. Bowersock wrote of Polemon’s renown:

Hadrian, another admirer of Polemo, extended that privilege [of free travel wherever he wished] to the sophist’s posterity and added others; his great-grandson, Hermocrates, is found fully equipped with privileges of all sorts. Hadrian’s relations with Polemo are well illustrated by the emperor’s own admission that his final statement on the affairs of the whole empire (a breviarium totius imperii, one supposes) was prepared with Polemo’s advice. Nor is this the only indication of Hadrian’s regard: his invitation to that sophist to deliver the oration at the consecration of the Olympieum at Athens was perhaps an embarrassing repudiation of the obvious person for the occasion, Herodes Atticus. Polemo’s enemies at Smyrna had once tried to compromise him by allegations that he was spending on himself funds transmitted by the emperor for the good of the city, but Hadrian replied firmly with a letter declaring that Polemo had rendered him an account of the moneys which he had given the city. Not that the great sophist did not spend extravagantly for his own ostentation. He could be seen travelling along the roads of Asia in a chariot with silver bridles and an elaborate entourage of pack-animals, horses, slaves, and dogs. But Philostratus rightly observed that such a display gave lustre to a city no less than a fine agora or a splendid array of buildings, ‘for not only does a city give a man renown, but a city itself acquires it from a man’. (Bowersock, 48)

Moreover, it is quite likely that Polemon, in his festive speech on the occasion of the consecration of the sanctuary of the Zeus Olympus in Athens, to some extent as a replica of Hadrian’s favour, possibly also previously coordinated with the latter, called for altars dedicated to Hadrian Olympus to be erected in private homes in the cities and areas around the Aegean. Numerous evidences can be cited for these altars in the provinces of Achaea, Macedonia, Thracia, and especially Asia. (my own machine assisted translations of all Witulski quotes)

In Kaiserkult in Kleinasien, Witulski explained in a little more detail the reason for concluding that household altars were ordered in association with the occasion of the inauguration of the Athenian temple to Zeus Olympus: pp. 130ff

With reason, it is to be noted that the consecration of the Athenian sanctuary of Zeus Olympus and the associated foundation of the institution of the Panhellenion also led to altars524 being erected in private houses525 to the reigning emperor Hadrian in the Greek-influenced east of the imperium Romanum. The geographical focus of the erection of these altars was obviously in the Greek motherland and in the western Asia Minor, i.e. in the Roman province of Asia.526 It is remarkable that the inscriptions carved on each of these altars have essentially the same wording: The reigning emperor Hadrian is given the title ‘Ολύμπιος [=Olympos] and worshipped as σωτήρ καί κτίστης [=Saviour Founder]. The regularity of the form of the altar inscriptions, expressed in the parallelism of wording and phrasing, and the large number of altars erected “imply the official nature of the occasion on which the altars were dedicated to Hadrian Olympios, Savior, and Founder“. In view of the Ολύμπιος title attached to Hadrian in these inscriptions, it is difficult to deny a connection between the content of the corresponding altars and the statues of the emperor erected in the temenos of the Athenian sanctuary of the Ζευς ‘Ολύμπιος, on the bases of which the Όλύμπιος title is also found within the imperial titulature. Therefore, the occasion that led to the erection of the house altars dedicated to Hadrian can be assumed to be the consecration of the Ζεύς Όλύμπιος sanctuary in Athens or an event closely related to this consecration, such as the founding of the institution of the Πανελλήνιον [=Panhellenion].

Anna Benjamin in 1963 documented as many as 269 altars to Hadrian in Greece-Asia so no doubt that number has increased since. The maps below identifying the sites where these altars have been found are copied from Benjamin’s article: 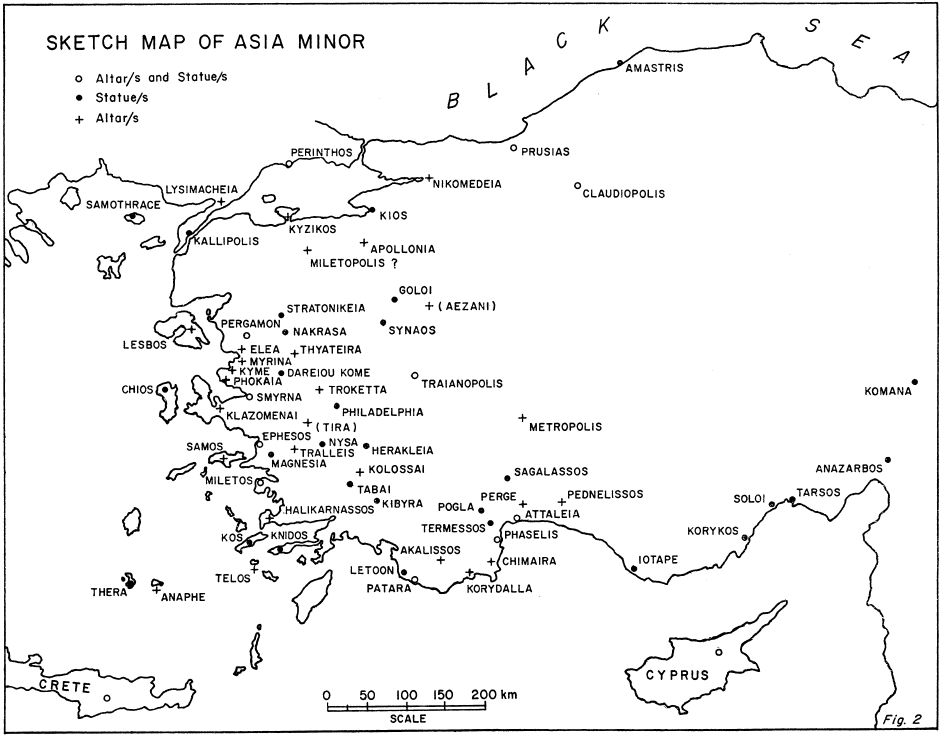 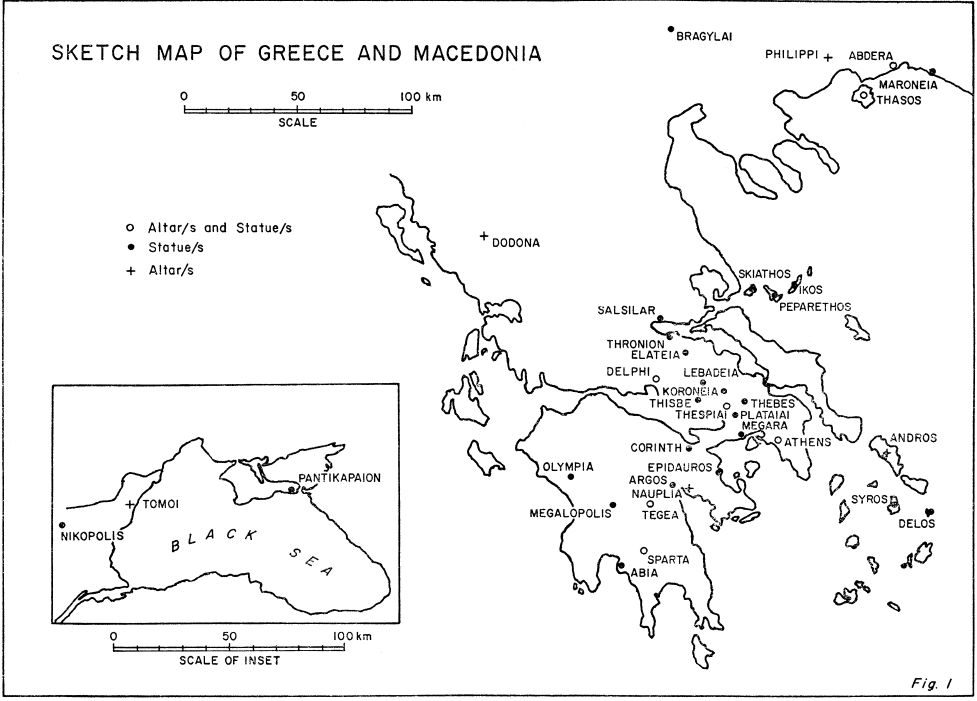 It is worth going beyond Witulski’s own words and reading what Benjamin herself had to say about the worship of Hadrian in this region (pp 58-60): END_OF_DOCUMENT_TOKEN_TO_BE_REPLACED