In the previous post we saw that the biblical account assigned the same boundaries as the later Assyrian empire (150 years after Solomon’s near-namesake Shalmaneser III) to the kingdom of Israel in the time of Solomon.

And Solomon ruled over all the kingdoms from the Euphrates River to the land of the Philistines, as far as the border of Egypt. These countries brought tribute and were Solomon’s subjects all his life. (1 Kings 4:21)

Obviously, Assyria itself is east of the Euphrates river but with a bit of checking I found that the Euphrates regularly features in Assyrian imperial inscriptions as the boundary beyond which their conquests extended westward:

I moved on from the land of Bit-Adini; (and) I crossed the Euphrates, which was in flood, in rafts (made of inflated) goatskins.

In my 17th regnal year: I crossed the Euphrates. I received the tribute of the kings of the land of Hatti. . . .

In my fourth regnal year: I crossed the Euphrates at its flood stage. I pursued after Ahum of Bit-Adini. . . .

In my tenth regnal year: I crossed the Euphrates River for the eighth time. I conquered the cities of Sangara of Karkamis.

In my eleventh regnal year: I crossed the Euphrates for the ninth time. I conquered 97 cities of Sangara (and) 100 cities of Arame.

In my 20th regnal year: I crossed the Euphrates River for the 20th time. I summoned the kings of the land of Hatti (for corvee work), all of them. I passed over Mt. Hamanu (Amanus).

In my 18th regnal year: I crossed the Euphrates for the 16th time. Hazael of Damascus trusted in his numerous troops; and mustered his army in great numbers. . . .  (this reference appears in four monuments)

I ordered to march to the land of Hatti. I crossed the Euphrates in its flood.

The Egyptian Pharaoh Thutmose III (1479–1425 BC) likewise boasted of reaching (even crossing) the Euphrates in the famous Battle of Carchemish.

All that’s enough to satisfy me that the Euphrates river was considered to be a natural imperial boundary in Assyrian times.

I Kings 4:21 with its statement of Solomon’s empire extending from Egypt to the Euphrates belongs to Russell Gmirkin’s second stratum in 1 Kings 3-11. (See the earlier post for context.)

This second stratum of the biblical Acts of Solomon portrays Shalmaneser III/Solomon “as a great builder of monumental works of architecture in the southern Levant”. I have copied it at the end of this post.

There is one passage (I Kings 4:7-19) that is missing from the passages first listed as comprising this layer of text but that appears a few sentences later as if it should belong with the others. Its significance lies in its

correspondence of Solomon’s territorial holdings with Assyrian provinces in the southern Levant (1 Kgs 4:7-19, in which Assyrian provincial centers such as Megiddo, Gezer and Gilead figure prominently; but no sites from Judah appear; the prominence of trade with Arabia; and the affinities of the Solomon building account with Sennacherib’s Palace Without Rival. . .

Solomon had twelve district governors over all Israel, who supplied provisions for the king and the royal household. Each one had to provide supplies for one month in the year. 8 These are their names:
Ben-Hur—in the hill country of Ephraim;
9 Ben-Deker—in Makaz, Shaalbim, Beth Shemesh and Elon Bethhanan;
10 Ben-Hesed—in Arubboth (Sokoh and all the land of Hepher were his);
11 Ben-Abinadab—in Naphoth Dor (he was married to Taphath daughter of Solomon);
12 Baana son of Ahilud—in Taanach and Megiddo, and in all of Beth Shan next to Zarethan below Jezreel, from Beth Shan to Abel Meholah across to Jokmeam;
13 Ben-Geber—in Ramoth Gilead (the settlements of Jair son of Manasseh in Gilead were his, as well as the region of Argob in Bashan and its sixty large walled cities with bronze gate bars);
14 Ahinadab son of Iddo—in Mahanaim;
15 Ahimaaz—in Naphtali (he had married Basemath daughter of Solomon);
16 Baana son of Hushai—in Asher and in Aloth;
17 Jehoshaphat son of Paruah—in Issachar;
18 Shimei son of Ela—in Benjamin;
19 Geber son of Uri—in Gilead (the country of Sihon king of the Amorites and the country of Og king of Bashan). He was the only governor over the district.

Gezer is not included there but see the Second Stratum passages at the end of this post for those references. I would also be interested in finding more indications of Arabia — they are not obvious from the names as listed in 1 Kings apart from 10:15, though the Queen of Sheba sounds significant. 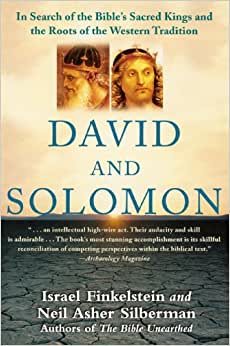 Gmirkin refers readers to Finkelstein and  Silberman’s David and Solomon: In Search of the Bible’s Sacred Kings and the Roots of the Western Tradition is to the full text available at archive.org. It is freely available on archive.org so you can read the pages cited. They examine the evidence for the sites belonging to a good century after the supposed time of Solomon.

The monumental architecture attributed to Solomon in this later literary strata appears to reflect actual constructions under King Ahab of Bit Omri, building projects which included the monumental gates and fortifications at the chariot cities of Megiddo, Gezer and Hazor (Finkelstein and Silberman 2006: 163-7, 275-81; cf. 1 Kgs 9:15-19), and the temple of Yahweh and other impressive buildings at Jerusalem, which was arguably ruled from Samaria in earlier times.

Such is further evidence Gmirkin advances for the Solomon narrative of 1 Kings being drafted from a memory (recorded in the “annals of Solomon/Shalmaneser”) of neo-Assyrian power over the region.

The Acts of Solomon is best understood as a Neo-Assyrian composition that incorporated translations of the cuneiform inscription at Ba’li-Ra’si into Aramaic and contained amplifications that included legendary accounts of international relations and his regional achievements as builder. This Neo-Assyrian text, authored and locally preserved by the educated ruling class of Neo- Assyrian Samerina [Samaria], celebrated Shalmaneser III as the first great Assyrian king whose rule extended to this region.

That inscription at Ba’li-Ra’si is known from another public inscription, the “Black Obelisk“, produced in the time of Shalmaneser III. As we saw in the previous post,

I (also) marched as far as the mountains of Ba’li-ra’si [near Mount Carmel] which is a promontory (lit.: at the side of the sea) and erected there a stela with my image as king.