One of the main tasks of the historian is to compare and cross-reference sources. If different sources attest independently to the same phenomenon, the historical reliability of that phenomenon is greatly enhanced. Thus, the biblical description of Solomon’s Temple, the stone building model from Khirbet Qeiyafa, and the temple from Motza correspond to one another, hence confirming the historicity of the biblical tradition.

— Yosef Garfinkel and Madeleine Mumcuoglu, The Temple of Solomon in Iron Age Context

Garfinkel and Mumcuoglu have overlooked the most basic step in the above argument. Sources may cohere with one another but before concluding that they therefore testify to historical facts one must test whether they are indeed independent of one another. The historian’s task is to cross-examine the witnesses even (or especially) when they agree.

Earlier posts in this series:

Before continuing with Russell Gmirkin’s analysis of the biblical account of the constructions of Solomon’s palace and temple we’ll hear a little more from Garfinkel and Mumcuoglu (with my bolded highlighting — as in all quotations):

Scholars of the minimalist school have argued that no temple at all was built in Jerusalem at the time of Solomon. According to the most extreme of these scholars, the description of the temple is entirely imaginary. Thus, an attempt has been made to remove the basis for legitimate study of the temple from an architectural or historical perspective and move all the attention to the literary and ideological levels (see discussions: Van Seters 1997; Smith 2006).

Two recent discoveries in the Kingdom of Judah have changed the picture (Figure 1). First, a building model dated to the 10th century BCE unearthed at Khirbet Qeiyafa in 2011 sheds light on some technical terms mentioned in the biblical text and enables us to overcome some of the difficulties (Garfinkel and Mumcuoglu 2013, 2016, 2018). Second, a temple dated to the 9th century BCE was uncovered in 2012 at Motza, 5 km west of Jerusalem (Kisilevitz 2015). These new finds clearly show that the architecture described in the biblical text existed in the same era and region. The new data bear out the historicity of the biblical text, even if it was rewritten and edited centuries after the actual construction of the building.

You can download and read the full open-source paper by Yosef Garfinkel and Madeleine Mumcuoglu, The Temple of Solomon in Iron Age Context. Meanwhile, here are the finds they refer to that demonstrate that the biblical description of Solomon’s temple matched other ninth century temples of the Levant and Mesopotamia. 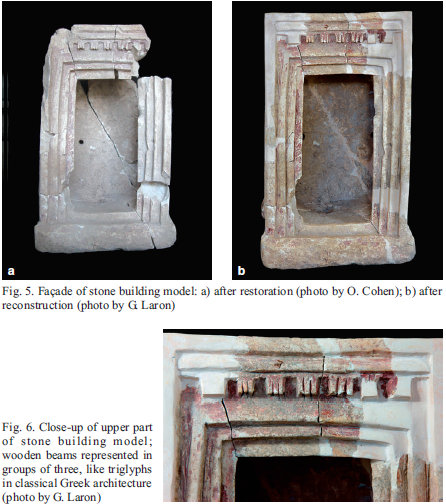 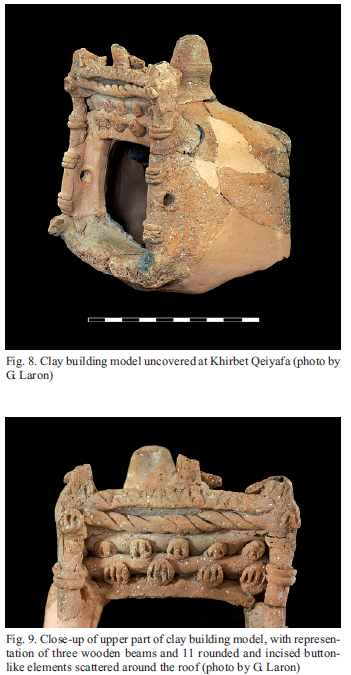 Compare this image and its note (from Solomon’s Temple and Palace): 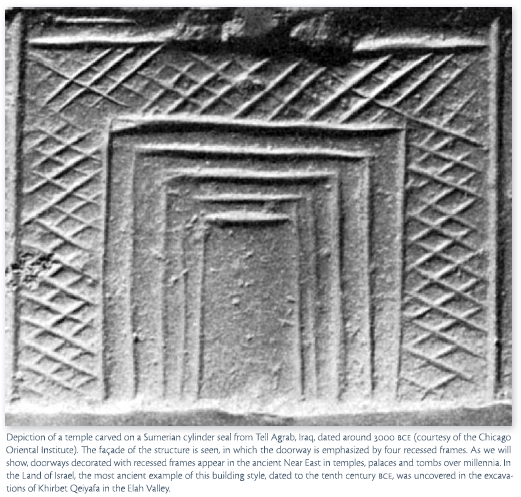 And the comparable temple layouts: 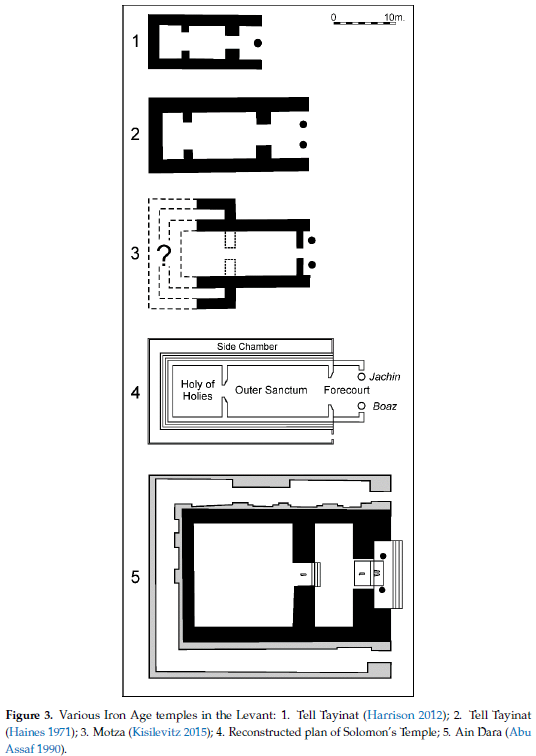 A photograph of the Motza temple from an article by Kisilevitz: 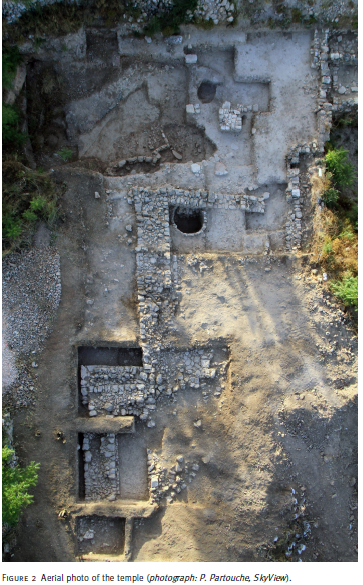 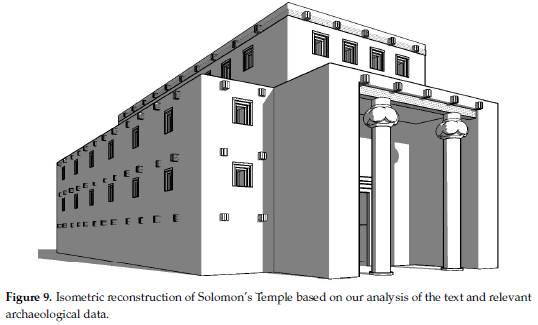 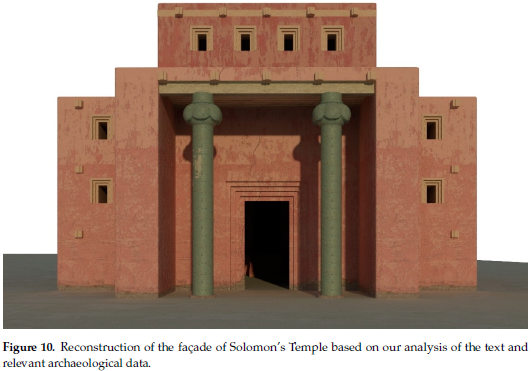 Russell Gmirkin calls himself a “post-maximalist”. He does not deny the similarity between the biblical and Near Eastern building accounts and Iron Age (in this case the tenth to eighth centuries) archaeological finds, but he does deny the independence of the biblical account.

Before taking up the case for the dependence of the biblical description it is worth noting for us non-specialists that we are looking at a set literary type or form. We read about various literary forms of the ancient Near East appearing in the Bible and Gmirkin directs us to a study by Hurowitz that describes in detail the “well-known ancient Near Eastern pattern” of the “building account”. To quote Hurowitz,

In the first part of this study, more than twenty extra-biblical building accounts were analyzed and found to possess similar or nearly identical thematic structures. Despite certain flexibility and variability in the structure, all the stories examined preserved the same basic sequence of topics and central events, including:

(1) a reason to build or restore a building along with the command or consent of the gods to the proposed project;

(2) preparations for the project including enlisting workers, gathering and manufacturing building materials and laying the foundations of the building;

(3) a description of the building process and of the edifice under construction;

(4) dedication of the building by populating it, along with celebrations and rituals;

(5) a prayer or a blessing meant to assure a good future for the building and the builder. Some of the stories included an additional element:

(6) conditional blessings and curses addressed to a future king who will repair the building when it falls into ruin.

An analysis of 1 Kgs 5.15-9.25 showed that this building account as well is strikingly similar in its structure to the extra-biblical stories. The same can be said about other biblical building accounts—the building of the Tabernacle, the restoration of the Temple by the returnees from Exile, and the repair of the walls of Jerusalem carried out and reported by Nehemiah. Even Josephus’s account of the rebuilding of the Temple by Herod seems to have adhered to this structure. These stories share not only the same thematic structure, but display many common motifs, expressions and ideas as well. In the subsequent chapters the individual components of the building stories were examined, concentrating on 1 Kings 5-9. It was seen that, as far as ideas and linguistic usage are concerned, these components have parallels in many other extra-biblical building stories . . .

Gmirkin writes that there are “prominent Assyrian influences on the biblical description of the temple that point specifically to 1 Kgs 5:13-7:51 as originally a seventh-century BCE composition of Assyrian authorship.”

Many details in the description of Solomon’s temple directly parallel Sennacherib’s description of his Palace Without Rival in inscriptions dating to 694 BCE.

Gmirkin lists in citation form a list of parallels but being me I want to check the sources and see for myself and for others who also like to inspect the details for themselves I have copied out the texts in full. Each heading is Gmirkin’s description of the parallel; I have copied and pasted the relevant text beneath each point.