If the gospels are mythical stories that have been presented as history then what value can they have for anyone today and how can we treat the gospels as a source for studying the historical Jesus? Those are the questions M. David Litwa addresses in the last pages of How the Gospels Became History: Jesus and Mediterranean Myths.

In answer to the first question Litwa writes:

“So let’s assume there actually was a corpse. What happened to it? There are only two possibilities. Either it was revivified, the way the Gospels tell it, or it wasn’t. If it wasn’t, it stayed on earth. There isn’t any third possibility. What happened to the body? Did it come alive or didn’t it?” [from The Flight of Peter Fromm]

The horns of this dilemma have gored the faith of some people. The meaning of Jesus’s resurrection—and of Christianity itself—is widely assumed to hang on its historicity. The value of any sort of “spiritual meaning” is discounted if there is no historical and physical basis for it. . . .

. . . [Peter Fromm] identifies the real with the historical (in the sense of “what happened”). Yet in the game of historical writing we never actually know exactly what happened. Historicity is not a cross from which the truth hangs in all its glory. It is at best a social agreement that someehing happened in the past. This assertion is not merely an outgrowth of postmodern philosophy; the ancients suggested something similar. The sophist Nicolaus (late fifth century CE) wrote that historical narratives are about past events acknowledged by consensus (homologoumenos’) to have happened. I emphasize “by consensus.” Historians do not have direct access to a past occurrence, though they might agree that it happened.

Litwa would say I am being too specific and should say that it is the consense of “historians” more generally. My response to the idea that most people take for granted the historicity of Jesus is found in an earlier post: Is it a “fact of history” that Jesus existed? Or is it only “public knowledge”? I prefer to narrow the point to “biblical scholars” because they are the ones who have set about to study Jesus.

Compare Johnston’s point: [A hero’s multiple versions/’plurimdiality’], and the intimate connection to [the hero] that this fostered in individuals, helped to create and sustain for some (perhaps all) the very assumption that he existed, which, in turn, sustained the practice of his cults.

The current consensus regarding the “historical Jesus” is that he lived in Palestine, that he was a Jew crucified around 30 CE by Roman authorities.

32. Here one might talk of “aspects of historicity,” as in Paul N. Anderson, Felix Just, and Tom Thatcher, eds., John, Jesus, and History, vol. 2, Aspects of Historicity in the Fourth Gospel (Atlanta: SBL, 2009).

The irony! The attempts to make a case for “aspects of historicity” in the Gospel of John in the cited volume are often the same tropes that in the earlier discussion were said to make myths believable! All page references in the following section are to the Anderson, Just and Thatcher volume Litwa cited above. (The following section is my response to Litwa’s insistence that there is a historical basis to some of the gospel stories.) 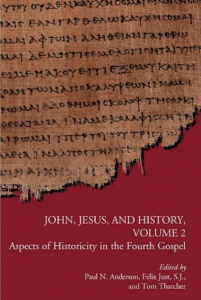 e.g. Culpepper engages the recent work of two scholars (Howard M. Jackson and Richard Bauckham) who argue that John 21:24 is an autobiographical note indicating that the author of the Gospel is the Beloved Disciple. In this view, the Gospel of John is based on the eyewitness testimony of a follower of Jesus and makes that claim explicitly in the narrative. (p. 372)

— context of mundane history and life

e.g. [W]hile the Johannine Prologue opens the Fourth Gospel as a confessional piece used in worship, it also bears witness to first-hand encounter with the object of its confession: the fleshly Jesus grounded in mundane history. (p. 380)

e.g. Miller and others, however, find it historically plausible that Jesus himself had an encounter with a Samaritan woman. Evidence for this includes . . . the Gospel’s familiarity with Samaritan beliefs about the location of worship and the coming of an eschatological prophet, and the fact that some Galileans did travel through Samaria on their way to and from Jerusalem. (p. 100)

e.g. There are several factors of historical realism in this narrative. . . . [T]he narrator’s featuring factors of personal hygiene and comfort contribute to the mundane realism of the presentation. … In conclusion, given the cultural context, it is highly plausible that a Jewish person in first-century Galilee would perform a footwashing. Therefore, it is plausible that Jesus performed a footwashmg as he gathered for a final meal with his disciples in Jerusalem. On the bases of Jewish and Hellenistic literature, religious and societal customs, other presentations of fopMashing in the New Testament literature, and various aspects of historical realism, this scenario in John demands renewed consideration as a historical event . . . (pp. 259, 260)