I would like to thank Larry Hurtado for his recent post Anonymous Gospels. Hurtado draws attention to a feature of our four canonical gospels that he believes is too often overlooked: the fact that they originally were anonymous and even the titles they later acquired are not declarations of authorship but rather statements about whose point of view each gospel represented (e.g. The Gospel according to Matthew / Mark / Luke / John.)

In particular, Hurtado refers readers to a 2008 article written by Armin D. Baum

Baum, A. D. (2008). The Anonymity of the New Testament History Books: A Stylistic Device in the Context of Greco-Roman and Ancient near Eastern Literature. Novum Testamentum, 50(2), 120–142.

The article is accessible on JSTOR: https://www.jstor.org/stable/25442594. Anyone interested who is unable to access that article or too short on time to read it in full might be interested in previous blog posts here discussing its contents:

The Gospels: Written to Look Like (the final) Jewish Scriptures?

Why the Anonymous Gospels? Failure of Scholarship in Pitre’s The Case for Jesus

The Arguments For and Against the Anonymity of the Canonical Gospels

For and Against the Anonymity of the Gospels — without table format

I’ve addressed the question of gospel anonymity in other posts, too, such as An Explanation for the Gospels being Anonymous.

But in thinking back on the question after perusing Hurtado’s post a related gospel feature suddenly took on a new significance for me. There can be little doubt that many of the gospel stories are kinds of re-writes of narrative episodes in the “Old Testament”. (An adjective widely used to describe this type of adaptation is “midrashic” but I have since come across Roger Aus’s suggestion that a more appropriate term might be “etiological haggada“.)

For example, it seems fairly obvious that John the Baptist in the first two gospels is based on Elijah. It is in 1 and 2 Kings where we find the lone prophet in the wilderness wearing rough animal skin clothing. Jesus’ baptism in the Jordan followed by his forty day time of trial in the wilderness is evidently a reminder of the Exodus of Israel and their forty year wandering through the Sinai. The calling of the disciples in the Gospel of Mark reminds readers of Elijah’s calling of Elisha. And so on right through to the final six chapters in which Howard Clark Kee counted 160 allusions to Scripture (and Karel Hanhart knows he missed at least one). See the posts on Mark 13, Mark 11-12, Mark 14-16.

What does this have to do with the anonymity of the gospels? END_OF_DOCUMENT_TOKEN_TO_BE_REPLACED

Cathbad placed his hand on the woman’s stomach and prophesied that the unborn child would be a girl named Deirdre, and that she would be exceedingly beautiful but would bring about the ruin of Ulster.

FROM THE TÁIN BÓ CUAILNGE

A recurrent theme in stories about the Irish gods is that of the love triangle between an old husband (or fiancé), a young suitor and a young girl. This is probably a disguised myth of sovereignty wherein an old king is challenged by a young claimant to the throne. The young girl in the middle of the triangle may be identified with the goddess of sovereignty, whose power of granting prosperity to the land had to be won by means of sexual union with the young pretender. If the land needed revivifying, the old mortal king had to be deposed in favour of vigorous youth.

Aldhouse-Green, Miranda. The Celtic Myths: A Guide to the Ancient Gods and Legends (Kindle Locations 975-981). Thames and Hudson Ltd. Kindle Edition. (My bolding in all quotations)

We also have Roman testimony that the Celts practised human sacrifice:

They used to strike a human being, whom they had devoted to death, in the back with a sabre, and then divine from his death-struggle. But they would not sacrifice without the Druids. We are told of still other kinds of human sacrifices; for example, they would shoot victims to death with arrows, or impale them in the temples, or, having devised a colossus of straw and wood, throw into the colossus cattle and wild animals of all sorts and human beings, and then make a burnt-offering of the whole thing.

Compare the circularity of “Biblical archaeology”:

Q: How do we know that the Biblical King David existed?
A: Archaeologists have unearthed the Tel Dan inscription that contains the expression many translate as “House of David”.
Q: How do we know that that inscription should not be translated temple of the beloved (david=beloved), a reference to a deity?
A: We have the Biblical story about King David.

The moral of this post is that correlation does not imply causation. We love mythical tales, both Celtic and Biblical. We often want to believe there is some truth behind them so it is easy for us to interpret archaeological finds as evidence for that “historical core”. But we fail to see that we are falling into the trap of circularity when we do that:

Q: How do we know the stories of Celtic human sacrifice were true?

A: Archaeologists have unearthed evidence of ritual killings.

Q: How do we know the evidence of the bones points to ritual killing?

A: That is the most natural interpretation given the literary accounts of human sacrifice.

In August 1984, the mechanical digger of peat-cutters working at Lindow Moss in Cheshire uncovered a human arm, part of a 2,000-year-old bog-body. The remains were those of a young man in his prime, about 25 years old. He was naked but for an armlet made of fox-fur, and no grave goods accompanied him. The mistletoe in his digested food revealed that he had eaten a special ‘last supper’. Like the Irish victims, this man had horrific injuries leading to his death: most significant were at least two blows to the head that cracked his skull and stunned him; he was then garrotted and, at the same time, his throat was cut.

The triple manner of his death has led some to connect him with the early medieval myth of the ritual threefold death that befell some Irish kings. One of these was the 6th-century AD Diarmaid mac Cerbhaill, who enquired of his wise men the manner of his death. The answer was that he would be stabbed, drowned in a vat of ale and burnt. Diarmaid scorned the prophecy, but it came to pass. Lindow Man was selected for a special death and burial. It was important that his body would be frozen in time, not permitted to decay, so the normal rites of death and ease of passage to the next world were denied him. His journey to the Otherworld was halted at the gate leading out from the world of humans. 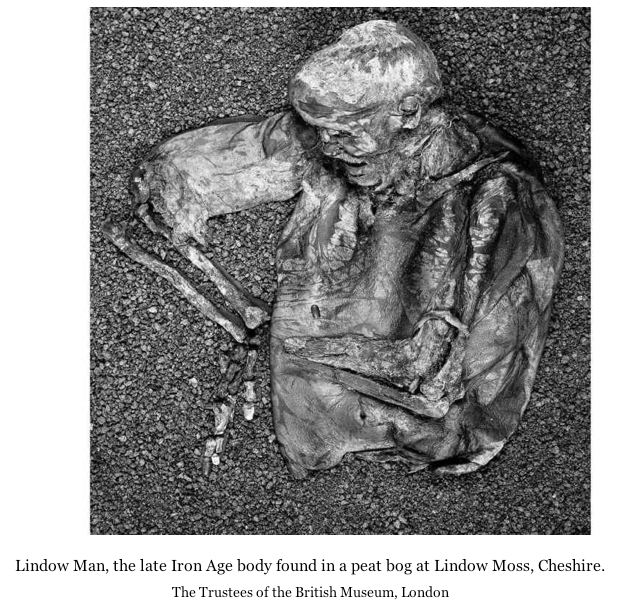 Murder on the Mire 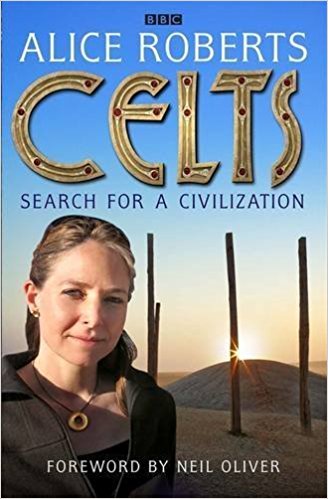 One Irish story, in the Cycle of Kings, describes the events leading up to the convoluted death of King Diarmuid. The king slays the man his wife has been having an affair with, and a Druid, or prophet, named Bec Mac De, foretells that he will suffer a three-fold death as a result – at the hands of one of the adulterer’s relatives, Aedh. The prophecy was very precise: Diarmuid would be killed by wounding, burning, drowning and a ridge pole falling on his head (a fourfold death, in fact). Eventually the prophecy is fulfilled. Black Aedh, in the doorway of the house where the king is feasting, pierces Diarmuid through the chest with his spear and breaks his spine; Diarmuid flees back into the house, but Aedh’s men set it on fire; Diarmuid immerses himself in a vat of ale to escape the flames; finally, the roof beam of the burning house falls on his head and finishes him off.

The triple deaths of kings and warriors described in the Irish myths, very often prophesied in advance, involve accidental fatal injuries as well as intentional assaults, but they may mythologize an actual practice: a ritual form of threefold killing. Perhaps this is a rare and valuable clue, from Celtic – rather than Roman – literature, that the Celts did indeed carry out human sacrifices.