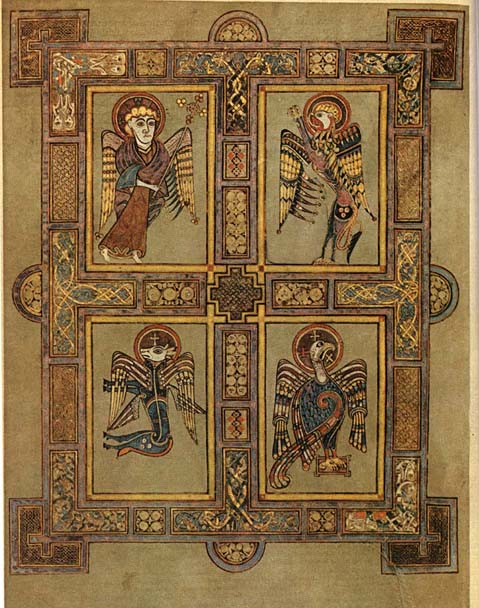 The genre of the gospels is an important question. Genre is an indication of the author’s intent. Does the author want to make us laugh at human foibles or weep over human tragedy, to escape into an entertaining world of make-believe, to be inspired and instructed by historical or biographical narratives, to mock establishment values, to understand and learn a philosophical idea? Authors choose the appropriate genre: treatise, satire, biography, history, novellas…. or their ancient equivalents.

Sometimes authors combine genres. We see this in the Book of Daniel where long apocalyptic passages suddenly break into the middle of gripping narrative adventure.

Another serious amateur researcher, Ben C. Smith, has posted a detailed argument for the gospels being composed as texts that were meant to complement the Jewish Scriptures in The Genre of the Gospels on the Biblical Criticism & History Forum. It’s an idea I myself have been toying with for some time so I can’t help but be a little biased in favour of his argument.

A common view among scholars today is that the Synoptic Gospels at least (Matthew, Mark and Luke) are a form of ancient biography. Ben Smith begins by taking on this popular notion by setting out the clear and distinctive differences between the Gospels and narratives of ancient lives:

Unlike most ancient “biographies” the Gospels are not reflective writings. They

Ben sets out detailed illustrations from about nine ancient Lives with readers urged to take note of this:

(A) the grammatical use of the first person,

(B) the authorial reflections both on the overall, pervasive character of the person whose biography it is and on the biography itself, and

(C) the way in which the author stands between reader and subject, consciously and openly filtering information, weighing options, and imparting value judgments, author to reader.

He concludes with the clear lessons:

The respective authors of the gospels of Matthew and Mark never once use the first person of themselves, never once reflect on the kind of character Jesus possesses or the kind of book they intend to write, never once step in between Jesus and the reader to offer value judgments or the like. . . . The character of Jesus receives no attention at all: he gets angry, shows compassion, and reacts in various ways, but there is no attempt to create an arc of these incidents, no attempt to use them to demonstrate what kind of man he was. . . . [T]he “words and deeds of Jesus… do not display the character of Jesus, but demonstrate his identity.”

As for the Gospel of Luke, yes, we seem to have a promising start with the prologue (though I would even question that much given that the prologue evidences none of the personal details normally found in those of biographical and historical works) but after that, nothing. The character of Jesus is just as flat as in Matthew and Mark.

By the time we reach the Gospel of John we have an explicit call to belief, to faith — not a “life of Jesus”.

The purpose of a βίος is to study the character of a person; but I have pointed out that the gospels do not really seem to care about the character of Jesus, what kind of man he is, and so forth; so far as Jesus is concerned, it is really all about his identity as the son of God.

Exactly. At least that’s how I see things, too.

Even N.T. Wright Gets It Right

For all of the apologist N.T. Wright’s flaws I have once or twice found myself in agreement with him with respect to certain arguments so I do not feel quite so alone when Ben Smith likewise finds a valuable nugget in his many writings:

On pages 57-58, 65 of How God Became King Wright summarizes what, in his judgment,the gospels are really trying to convey overall:

In fact, to sum up the proposal toward which I have been working, the four gospels are trying to say that this is how God became king. We have, partly deliberately and partly accidentally, forgotten this massive claim almost entirely.

…the four gospels present themselves as the climax of the story of Israel. All four evangelists, I suggest, deliberately frame their material in such a way as to make this clear.

I think that Wright is right about this. In the gospels, Jesus is not just a king, a prophet, and a wise man; he is the king (the messiah), the prophet, and the wisest of wise men… not as a matter of his personal character, mind you, but in explicit fulfillment of everything perceived to be promised in the Jewish scriptures; he is allegedly the climax of the story begun in those scriptures.

The “genre” we are broaching here is “salvation history” — the type of history we read in the Jewish Scriptures’ historical books, Genesis Joshua, Judges, 1-2 Samuel and 1-2 Kings. But notice another scholar’s critical point,

Close connections, literary and philosophical, between the Gospels and the Jewish Scriptures have been noted. The Evangelists share the Jewish belief that God (singular) can and does interact catastrophically in human affairs; beyond this, they believe themselves to be citizens of an eschatological age ushered in by a person from recent history. When this person becomes the subject of a literary treatise, it should not be surprising if such literature finds no exact parallels in the Greco-Roman world.

Lest you are thinking here of all the kings’ armies fighting one another pause to focus on those chapters relishing in the rise of David and especially those leading readers through the ups and downs of the careers of Elijah and Elisha. (Thomas Brodie and Adam Winn have both drawn clear analogies between these Old Testament tales and the narratives of Jesus.)

The Anonymity of the Gospels

Another significant feature about the gospels is explained by this hypothesis — their anonymity. Ben Smith cites Armin Baum’s case for this Jewish style of history telling makes the stories “more direct and vivid”. I believe more to the point is that the anonymity bestows an aura of authority on the tale. Contrast the Greek way of writing history where the author would intrude to express his own doubts or conviction about the different versions of events. Further from Baum:

By writing their works without mentioning their names, the New Testament narrators deliberately placed themselves in the tradition of Old Testament historiography. Like their Old Testament models, they wanted to use the anonymity of their works to give priority to their subject matter, the narratives about the life of Jesus (and the spread of the early Jesus movement). As authors they wanted, for the most part, to disappear behind their subject matter. In order to move the subject matter to the foreground as much as possible they let their actors talk mostly in direct speech and abstained from any reflections in the first person. Even in this respect they took over the stylistic devices with which the Old Testament historians had already tried to disappear as far as possible into the background of their narratives. Since they were mainly concerned with their subject matter and not with displaying their literary skill, the narrators of the New Testament also largely abstained from elevating the colloquial Hellenistic prose of their sources to a more sophisticated literary level. All of these literary idiosyncrasies of the Gospels and Acts were designed to make the authors as invisible as possible and to highlight the priority of their subject matter.

In a second post following directly on the heels of his first Ben Smith elaborates this point by pointing out the same feature being a characteristic of ancient Near Eastern historical writing more generally.

The Titles of the Gospels

I liked this point from Ben Smith:

But it has been noticed before that they are very similar to how people referred to the Greek translations of the Jewish scriptures: κατὰ Σύμμαχον, κατὰ Ἀκύλαν, κατὰ τοὺς Ἑβδομήκοντα (the scriptures according to Symmachus, to Aquila, and to the Seventy). The scriptures are what matter here; the name of the translator is attached for convenience. Likewise, with the gospels, the perception is that it is the gospel story itself that matters; the name attached to it is seen as less that of the author than that of a tradent.

Do read Smith’s original post for more details if this topic interests you. One item I won’t cover here is his discussion of the word λόγια, its various connotations and the meaning it acquired around the time the gospels were written. Hint: Papias speaks of the λόγια of the Lord and the same word could be used of the Jewish Scriptures. Smith’s article adds other comparisons with books like Joshua and Daniel.

In Smith’s second post we read several of his after-thoughts that all deserve further elaboration.  Examples:

What happens when you take a prospective Christian author who thinks in terms of something like Hebrews 1.1 and wishes to write up the latest installment in salvation history? In the past God spoke through prophets, but now he speaks in a son.

That is not just a quirk belonging to the author of Hebrews; many early Christians thought that Jesus was the end-all, be-all manifestation of God in history. Because now all those priests and judges and prophets and kings are epitomized in one person, we coincidentally get something sort of resembling the scope of a biography, one single individual.

But that is a byproduct of salvation history, not a conscious desire to imitate contemporary biographical writing. And of course, since it is not really about the lifespan of a human being, it comes down to just the career of this human fulfillment of scripture (not his upbringing, his early influences, which philosophers he liked to read, and so forth). And actually, this focus on one person, with a sort of unity characterizing the work, is closer at any rate to what we find in Ruth or Daniel or Jonah, I think, than what we find in the biographies, since the latter are about character, whereas the former are about God dealing with humanity.

Mark is consciously engaging in a sort of scriptural mimesis, not merely in the sense that he mined scripture for texts to turn into gospel details; we already know that much. But, rather, he is actually writing in the style, the mode, the manner, and the spirit of those ancient scriptural texts.

Notice, too, the way the Gospels are rich in allusions to the narratives of the Jewish Scriptures. Several scholars have described much of the content as “midrashic” re-writings of Old Testament texts. I see this, too, as a further vindication of Smith’s thesis.

Thought-provoking. At least I certainly think so. 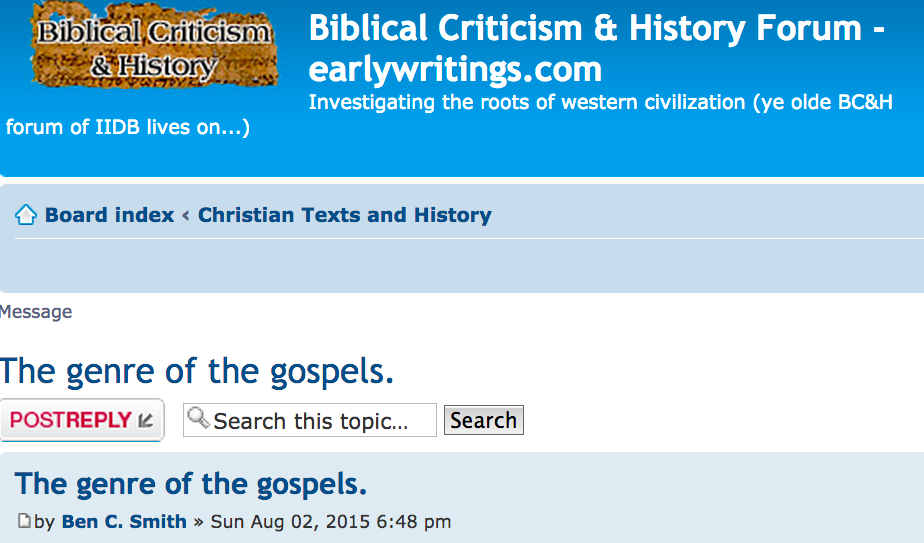 13 thoughts on “The Gospels: Written to Look Like (the final) Jewish Scriptures?”