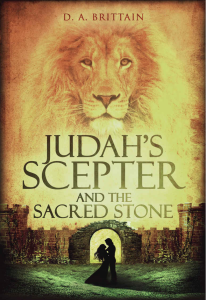 Who would have believed it! Someone (namely D. A. Brittain) has actually written a novel about Jeremiah taking the stone of destiny, Jacob’s “pillow stone”, from Jerusalem along with a surviving daughter (Teia Tephi) of the wicked king Zedekiah to Ireland to marry up with another descendant of Judah in order to preserve the Davidic dynasty from extinction after the Babylonians captured the biblical kingdom of Judah in 587 BC. The novel is Judah’s Scepter and the Sacred Stone.

How could I resist! Belief in all of that stuff was once the focus of my life as a member of the Worldwide Church of God for so many years. One of our most exciting books was The United States and British Commonwealth in Prophecy (later changed to The United States and Britain in Prophecy as the decades took their toll on the unity and white racial dominance of the Commonwealth nations). Britain includes a bibliography that warms old memories with titles I also ferreted out from a dingy old room that housed the local British Israel society at the time. Luckily I was able to look up one of those references to find the inspiration for one of Brittain’s concluding scenes:

From that day forward, the marriage of Eochaid and Teia was forever symbolized on the new flag that Eochaid had commissioned to be flown across the land of Erin. The flag displayed the red hand of Zerah, fitted on the Star of David, under a single royal crown that symbolized to all the union of Yahweh’s two-kingdom nation.

Sure enough, here it is in W. H. Bennett’s Symbols of Our Celto-Saxon Heritage, albeit with the addition of the George Cross background to make the arms of Northern Ireland. 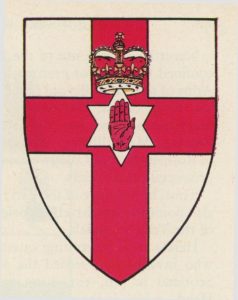 For those not in the know, the red hand in British Israel symbolism represents the royal line of Zerah, one of the two branches of Judah’s royalty, as taken from this passage in Genesis 38 speaking of the birth of Judah’s two sons:

27 When the time came for her to give birth, there were twin boys in her womb. 28 As she was giving birth, one of them put out his hand; so the midwife took a scarlet thread and tied it on his wrist and said, “This one came out first.” 29 But when he drew back his hand, his brother came out, and she said, “So this is how you have broken out!” And he was named Perez. 30 Then his brother, who had the scarlet thread on his wrist, came out. And he was named Zerah.

If you want to know how that little incident is relevant to Queen Elizabeth II today then you can still order a chart setting out the family lines from the Covenant Publishing Company. (And in case you’re wondering how a scarlet thread turned into a red hand I think we were meant to assume that ancient artists did not know how to draw red threads around wrists.)

Here is a key section of one of the charts I once collected: 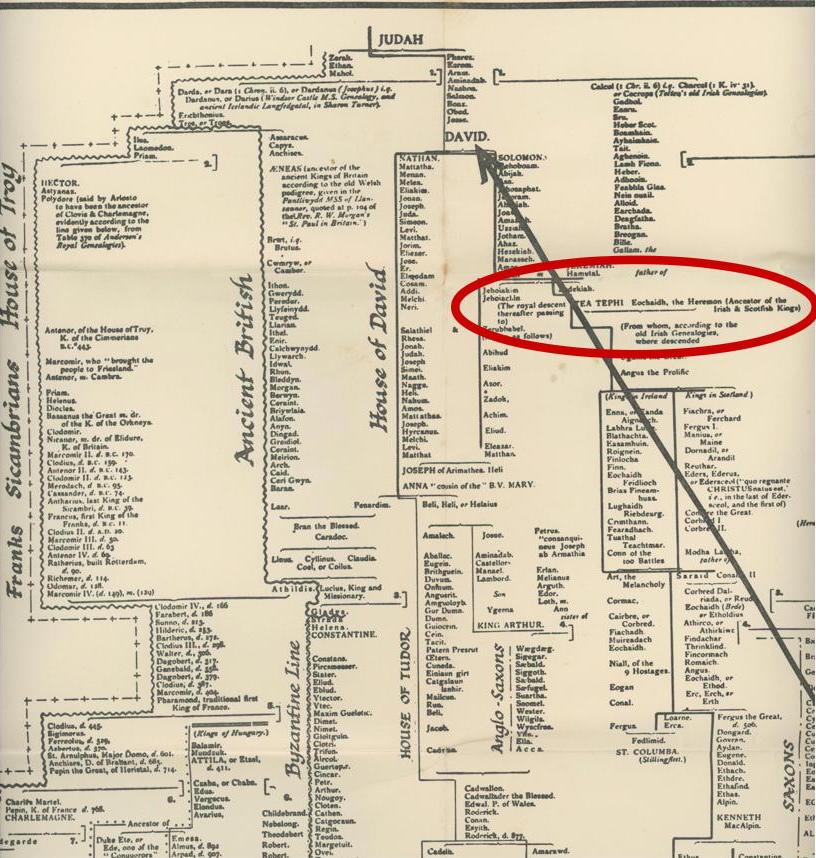 I’ve highlighted the Teia marriage to the ancestor of the Irish and Scottish kings that eventually emerge at today’s monarch, Queen Elizabeth II. (Yes, that is the Trojan line you can see on the far left. And yes, the Byzantine and Tudor names really are somehow linked to King David.)

Anyway, it turns out that Judah’s descendants through Perez became the royal line of David and those from Zerah got mixed up with Israelite tribes who were scattered after the Assyrian kingdom destroyed the northern kingdom of Israel in the eighth century BC. Those tribes migrated across Europe settling as far as the British Isles. It was Jeremiah’s mission to arrange for the uniting of the two branches by rescuing an heir of David’s line and joining her up with the Perez descendant in Ireland. From their union would come the royal family of Great Britain right through to today, but they would have to give up their throne to Jesus when he returns from heaven to claim it for himself and begin his rule of all the Israelite tribes once again, including Judah.

Exciting stuff — if you somehow got hooked through the back door. Details like that are never put out in the shop window of “what we believe” for prospective buyers into a cult to see up front.

Anyway, back to the novel. It’s a nice, even exemplary romance for the girls, with a fair amount of adventure involving pirates and storms at sea, and bloody battles for the boys, a most suitable prize for a more mature Sunday School graduate. All the good characters would never dream of sex outside of marriage and the heroine, a teenage girl, always asks permission of her elder guardian (Jeremiah) before ever stepping outside (with a chaperone, naturally) to see what the world looks like. The girl who emerges as a rival to Teia is wont to show a little cleavage and use her long eyelashes to temp the Irish prince-become-king, Eochaid. But these wiles were all warning signs and the reader eventually learns that she was a devilish deceiver plotting regicide and adultery.

Jeremiah, meanwhile, strikes me as a gauche presence who for some reason gets invited to meet with royals despite going around telling others they are worshiping devils. I think it has always been difficult to make biblical saints realistically charismatic, unless they live grossly unsaintly lives like David, as we know. 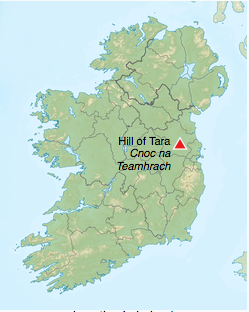 The adventures come to an denouement ten years after the fall of Jerusalem with the now royal Teia and her royal husband enjoying an afternoon on Tara’s Hill watching their children play.

Brittain has written more than a “historical” romance, however. An epilogue depicts a “present day” crowning of the new king, Charles of course, with a discussion involving some knowing bystanders who think the Second Coming will probably (can’t set absolute dates, obviously) be in 2033.

“Many biblical scholars believe we will soon see what is called the ‘end of days,’” Jerome said. “Some say the promised Messiah will come on what is known as a ‘Jubilee year,’ in the fall of 2033, after the blood moons appears during Rosh Hashanah.”

“Well, it is not certain,” Timothy interjected. “What I mean is, no one is certain of the time of the next Jubilee year. Some rabbis believe the Jubilee year is somewhere between the years 2029 and 2036.”

“Well, we do know that the next series of blood moons will appear in the years 2032 and 2033,” Jerome said. “All will see the red moon in the sky on the Feast of Passover, and then again during Rosh Hashanah, on the Feast of Tabernacles, in the year 2033.”

“It sounds like you are talking about a tetrad,” David said. “I’ve studied astronomy, so I’m familiar with the two-year string of four total lunar eclipses. A series of four together is rare. After the sixteenth century, none even occurred until the twentieth century. However, the frequency of these events has accelerated, especially since 1949.”

“Yes, very good— once Israel again became a nation in 1948,” Timothy said. “Israel has seen war come to their land during every tetrad that has occurred since then.

I thought the whole British-Israel thing was for fringe cults so I am at something of a loss to understand D. A. Brittain’s interest and reason for the novel. In her Acknowledgements she thanks Hillsong UNITED for their music. Are members of the Hillsong church interested in this myth?

I can’t leave without showing off one more image. This is a little momento I bought myself when visiting Edinburgh Castle last year: 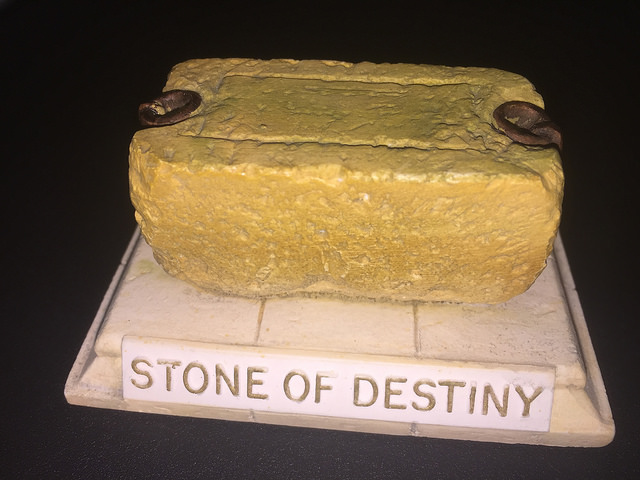 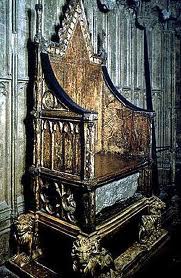 Believe it or not, that’s the stone that Jacob used as a pillow according to Genesis 28. It was so uncomfortable that the stress caused him to have hallucinations of angels walking up and down a stairway between him and heaven so he turned the stone on its end and made a pillar that he anointed with oil. It became an important relic that Jeremiah rescued from Nebuchadnezzar’s pillaging hordes and brought with him to Ireland. The Stone of Scone has been used in coronation ceremonies of British monarchs to this very day. So we know it’s a true story.