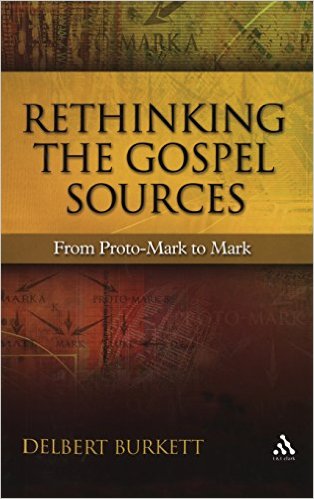 Matthew 9:14 Then John’s disciples came and asked him, “How is it that we and the Pharisees fast often, but your disciples do not fast?

Luke 5:33 They said to him, “John’s disciples often fast and pray, and so do the disciples of the Pharisees, but yours go on eating and drinking.“

Matthew uses it 16 times. Luke has 11 parallel passages to those but uses the word only once.

Not that he dislikes the word because he uses it elsewhere. It looks like he only objects to it if it is found in Matthew — if he indeed was using Matthew.

Matthew 19:21 Jesus answered (ἔφη), “If you want to be perfect, go, sell your possessions and give to the poor, and you will have treasure in heaven. Then come, follow me.”

Luke 18:22 When Jesus heard this, he said (εἶπεν) to him, “You still lack one thing. Sell everything you have and give to the poor, and you will have treasure in heaven. Then come, follow me.”

13 times in Matthew; 6 parallel passages in Luke but not one use of it in those passages. Luke does use it 4 times in other places, however.

Matthew 27:33 They came to a place called (λεγόμενον) Golgotha (which means “the place of the skull”).

Luke 23:33 When they came to the place called (καλούμενον) the Skull

12 times in Matthew; 7 parallel passages in Luke in which ἐκεῖθεν is used a total of one time.

Matthew 4:21 Going on from there (ἐκεῖθεν), he saw two other brothers, James son of Zebedee and his brother John.

Luke 5:10 and so were James and John, the sons of Zebedee, Simon’s partners.

10 times in Matthew; 4 parallels in Luke without using ἀναχωρέω

Matthew 9:24 he said, “Go away (Ἀναχωρεῖτε). The girl is not dead but asleep.” But they laughed at him.

Luke also uses this word but not when he is writing material that is parallel to Matthew and where Matthew uses it.

Matthew 8:2 A man with leprosy came and knelt before (=worshipping) him . . .

Luke 5:12 A man came along who was covered with leprosy. When he saw Jesus, he fell with his face to the ground (not worshipping) . . .

6 times used by Matthew and 4 of these passages are paralleled in Luke but without use of the word. Luke does use the word in Acts 18:7 that does parallel the structure used in Matthew 12:9.

Matthew 8:34 Then the whole town went out to meet Jesus. And when they saw him, they pleaded with him to leave (μεταβῇ) their region.

Luke 8:37 Then all the people of the region of the Gerasenes asked Jesus to leave them (ἀπελθεῖν), because they were overcome with fear. So he got into the boat and left.

In the gospels this word is found only in Matthew. There are 4 parallel sections in Luke but no occurrences of the word.

Matthew 24:3 “Tell us,” they said, “when will this happen, and what will be the sign of your coming (παρουσίας) and of the end of the age

Luke 21:7 “Teacher,” they asked, “when will these things happen? And what will be the sign that they are about to take place?”

Not only words but grammatical constructions are avoided by Luke when he is supposedly drawing on Matthew.

Not only words but also certain grammatical constructions recur in Matthew, such as a genitive absolute followed by ἰδοὺ or καὶ ἰδοὺ.

Matthew uses this construction 11 times. 6 of these passages are paralleled in Luke.

Only once does it occur in one of these parallels, in Luke 22:47 (compare Matthew 26:47) . . . . [T]his one instance [has been taken] as evidence that Luke used Matthew, since here a unique literary characteristic of Matthew appears in Luke. However, to call this a “unique” characteristic of Matthew overstates the case, since it occurs elsewhere in Acts 1:10. . . . On the contrary, when we stop focusing on a single passage, the whole picture presented by Table 3.8 suggests just the opposite. Luke 22:47 and Acts 1:10 show that Luke had no aversion to the construction. Why then, given the theory that Luke used Matthew, did he almost always eliminate it when he found it in Matthew? (p. 53)

The table shows that Luke used Matthew’s phrase once out of the six times he paralleled Matthew’s material. 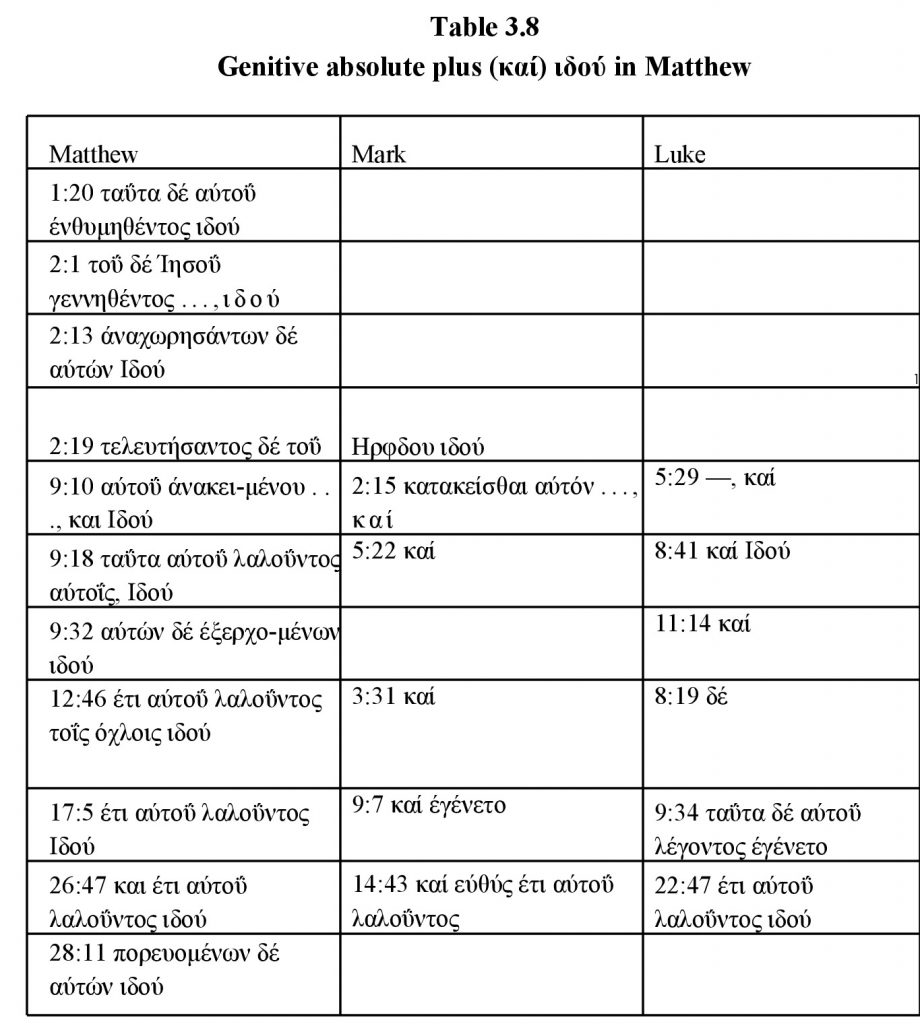 Yet even though Luke liked the idea of fulfilled scripture he never once uses such a phrase. This failure adds support to the view that he did not know of Matthew.

Contrast Luke where he parallels two of the above passages:

Matthew 7:28 When Jesus had finished saying these things, the crowds were amazed at his teaching

Luke 7:1 When Jesus had finished saying all this to the people who were listening, he entered Capernaum.

Matthew 11:1 After Jesus had finished instructing his twelve disciples, he went on from there to teach and preach in the towns of Galilee.

Luke 9:5 If people do not welcome you, leave their town and shake the dust off your feet as a testimony against them.

Matthew 13:53 When Jesus had finished these parables, he moved on from there.

Luke 8:18 Therefore consider carefully how you listen. Whoever has will be given more; whoever does not have, even what they think they have will be taken from them.”

Matthew 19:1 When Jesus had finished saying these things, he left Galilee and went into the region of Judea to the other side of the Jordan.

Matthew 26:1 When Jesus had finished saying all these things, he said to his disciples

Matthew has a habit of making insertions or interpolations into his source material. Two illustrations:

Matthew 9:13 On hearing this, Jesus said, “It is not the healthy who need a doctor, but the sick. But go and learn what this means: ‘I desire mercy, not sacrifice.‘ For I have not come to call the righteous, but sinners.”

Matthew 12:7 I tell you that something greater than the temple is here. If you had known what these words mean, ‘I desire mercy, not sacrifice,’ you would not have condemned the innocent. For the Son of Man is Lord of the Sabbath.”

The bolded sentence breaks the logical flow of the surrounding material. Matthew liked the idea of mercy trumping sacrifice so much he forced his way into using it twice. No-one can deny that Luke also liked the principle of mercy being more important than sacrifice (just recall his parable of the Good Samaritan) so it must be considered odd that he did not adapt Matthew’s words had he known them.

Delbert Burkett cites many other examples (over 50 in fact) to make his case.

As I think about not so much each one of the above but such thorough absence of recurring characteristics of Matthew’s style I do confess that I am feeling strongly obligated to let go of my preference for Luke making use of Matthew’s gospel.

22 thoughts on “So Luke did not know Matthew after all?”