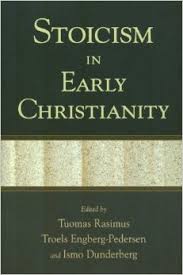 We have recently seen how Hector Avalos argues for the irrelevance of biblical ethics in today’s world but this post looks at how and why Jesus emerges for the first time as a supremely ethical figure in the Gospel of Matthew. Stanley Stowers (Professor Emeritus of Religious Studies at Brown University) argues that the author of this gospel refashioned the Jesus in the Gospel of Mark into a Stoic sage and thereby was responsible for giving the Christian world its figure of Jesus as the defining moral teacher of all time. And a Stoic sage, a truly godly person, might at times appear to act against worldly understandings of right and wrong but nonetheless maintain a truly virtuous authority.

So what is a Stoic sage? A Stoic Sage was a most rare phenomenon. The ancient Stoics

either doubted that a sage had ever lived or thought that maybe one or two had existed — perhaps Socrates, Heracles, or the earliest humans. Philo of Alexandria makes Moses into such an authority, a sage who embodies the law.

That’s not exactly a definition of a Stoic sage but it does prepare us for the distinctive portrait of Jesus that we find in the Gospel of Matthew. Before we can plunge into more details about this sage we need to grasp the broader argument that Matthew was creating an idealistic Stoic teacher figure for his gospel despite sometimes being challenged by some very unStoic Jesus passages in his Gospel of Mark source.

Since reading Stowers’ argument I have come to think that this explanation potentially accounts for a significant number of the differences between the Gospels of Matthew and Luke that till now have widely been understood as evidence of differences in the ways two authors have used a common source, Q. But I am jumping ahead of myself here.

Let’s start at the beginning, with the Jesus in our earliest records. (I’ll speak of Matthew as the author of the Gospel of Matthew for convenience even though this traditional attribution is questionable at the very least.)

Jesus emerges for the first time as a teacher of ethics in the Gospel of Matthew. Before this Gospel we meet Jesus in the letters of Paul and the Gospel of Mark where he is portrayed in a quite different role. Stowers explains:

We find the same observation in Stevan Davies’ book (Spirit Possession and the Origins of Christianity) that we recently discussed,

We do not know what those teachings were. Our sources are as confused as we are and two of them, Mark and Thomas, indicate that they thought his public teachings basically incomprehensible. Paul shows no interest in them, nor do the other letter writers of the New Testament, and Jesus’ teachings play no role in the spread of the Christian movement according to the Acts of the Apostles. John freely makes up teachings for Jesus to teach. . . .

Two of our principal sources of information about Jesus did not believe in Jesus the Teacher at all. Paul refers on occasion to teachings, generally as proof-text support for his own opinions, but Jesus the Teacher is otherwise of no interest to him. Paul swears to the Galatians “Before God I am not lying!” that he made no effort to learn about Jesus and his teachings from the eyewitnesses easily accessible to him (Gal. 1: 1-2: 15). John’s gospel, similarly does not contain the teachings of Jesus as that phrase is understood in contemporary scholarship. . . .

It might be argued that Jesus was a great teacher but, thanks to radical changes in his followers’ view of him after his death, his teachings were no longer relevant to their enterprise. But Q, Thomas, Matthew, Mark, and Luke (in the Gospel) do give us teachings; indeed, it may well be that the very idea that Jesus was primarily a teacher came into being only after his death.

Matthew’s main source was the Gospel of Mark. We know this because he reproduced the bulk of it in his own gospel. Mark’s Jesus, however, was more dark than light:

Mark presents Jesus as a teacher of mysterious teachings about the coming kingdom of God, a mystery so obscure that none of Jesus’ disciples are able to understand it. Jesus in Mark is about as remote from a guide about how one ought to live day to day as one can imagine.

Matthew’s other source in Stowers’ argument is Q, the source for much of Jesus’ teaching material. Q is coming under increasing questioning in now but I don’t think the removal of Q makes a significant difference to Stowers’ larger argument. (Stowers compares sayings in Q with Matthew’s modifications to argue for Matthew’s intent to make Jesus a Stoic teacher, but since the “more primitive” Q sayings are derived from the Gospel of Luke, one can also argue that Luke was opposed to the Stoic ethic found in Matthew’s Jesus.)

What is the evidence that Matthew was inspired by Stoic philosophy when he decided to shape a new Jesus out of this material, one who both teaches and personifies the essence of the highest morality imaginable? END_OF_DOCUMENT_TOKEN_TO_BE_REPLACED