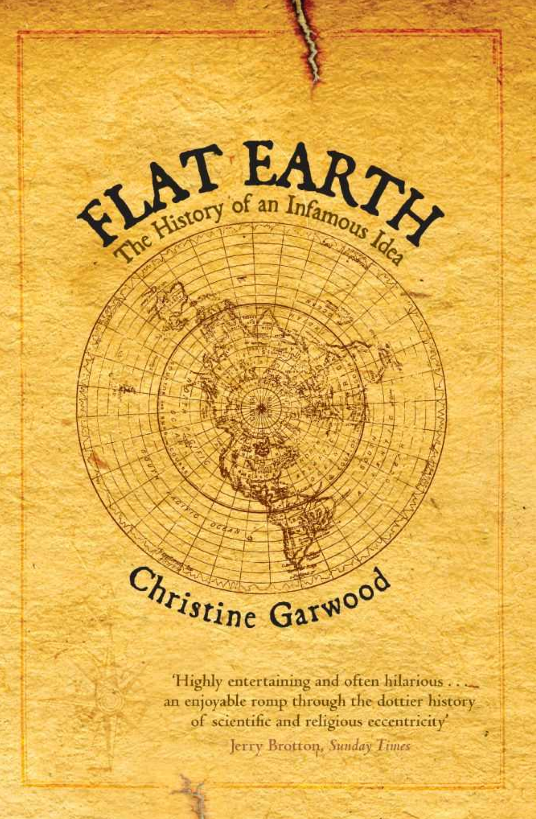 That should be a mildly discomforting thought. If so, it segues into the questions of the relevance of the history of the flat earth movements. (We can’t have a history book that’s written just for entertainment alone, after all.)

While flat-earth belief is widely ridiculed, it remains a central point of departure between a literal interpretation of the Bible and the findings of science; indeed, flat-earth campaigns provide interesting comparisons with the modern creationist movement in a variety of ways.

For this reason the flat-earth idea is a pivotal concept : it is one of the most radical and readily refutable Bible-based truth claims about the natural world, while the rotundity of the earth is one of the most fundamental scientific facts, a cornerstone of received knowledge. Despite its apparent absurdity , flat-earth belief therefore occupies a unique place in the relationship between science and Christianity.

It raises issues central to science education, the uses and abuses of information, the making of knowledge about the natural world and the psychology of human faith, while the extraordinary history of flat-earth campaigns involves a plethora of conspiracies, counter-cultural critiques and subversive discourses ranging from the moon-landing hoax to the end of the world.

A few (John Hampden, Charles Kenneth Johnson) of the leading lights of the movement do come across as very difficult personalities but not all of them. Others (Samuel Birley Rowbotham, Samuel Shenton) are striking for their public gentlemanliness and sheer normality.

One detail that struck me early in the book was a reminder of just how recent has been the emergence of scientists as professionals in their own right, with dedicated science faculties at universities and government funded positions. This development coincided with the emergence of state compulsory education. It is no coincidence that first flat earth proponents emerged at the same time as these developments. Science was no longer the preserve of amateurs but was being coopted to serve special interests; the potential of the newly emergent state-enforced mass education for indoctrination serving the interests of state and religious institutions was also recognized by many.

In this context one has to grant a certain grudging admiration for flat earthers for standing up and taking a position against such emerging threats.

Unfortunately we have to concede that there are always a few people who prove to be unteachable. Suspicion of theory and inability to grasp ideas beyond their own immediate experience, mixed with social respectability awarded to the holy bible and the principle of faith, will always overwhelm a handful of us.

Surprisingly a number of well-known names in science have had enough curiosity and tolerance to engage seriously with flat-earth publicists. One of these was the naturalist who discovered the theory of evolution independently of Darwin and who was also friend of Charles Darwin, Alfred Russell Wallace. Wallace was perhaps idealistic, believing that a clear demonstration of facts through experimentation would convince flat earthers of their error leading them to change their minds. His scientific peers (including Darwin) disapproved of his active engagement with them and towards the end of his life Wallace appeared to finally accept their verdict. Even a clear demonstration of the curvature of the earth over six miles would not convince them and he found himself the butt of defamatory public attacks and court cases initiated by one of the less pleasant of flat earth advocates.

Another interested party from the world of science was Patrick Moore:

True to form, Moore adopted a candid approach: he confessed that in common with the overriding majority of Planetarium readers he disagreed profoundly with Shenton’s opinion, but echoed Voltaire’s statement ‘I defend to the death your right to say it.’ Moore’s request denoted his conviction that anti-globularist ideas would be of interest to astronomical enthusiasts and his judgement was undoubtedly accurate: scientifically minded people all over the world were curious to know how ardent flat-earth believers upheld their extraordinary world-view.

When a friend of Moore’s found himself in the awkward position of having the power to close down a flat earth society he asked for Moore for advice:

Moore was encouraging: ‘For God’s sake, keep it going,’ he allegedly exclaimed, ‘we must have heretical people in the world of astronomy.’

The most ironical flat earth society ever was the Flat Earth Society of Canada. These were a very serious bunch of academic clowns (philosophers, of course) who would tolerate no kooks and were strictly on their guard to prevent any nutters , fundamentalists and cranks from joining their society. People were very strange, they averred, and You can see how terribly serious they were from their photo: 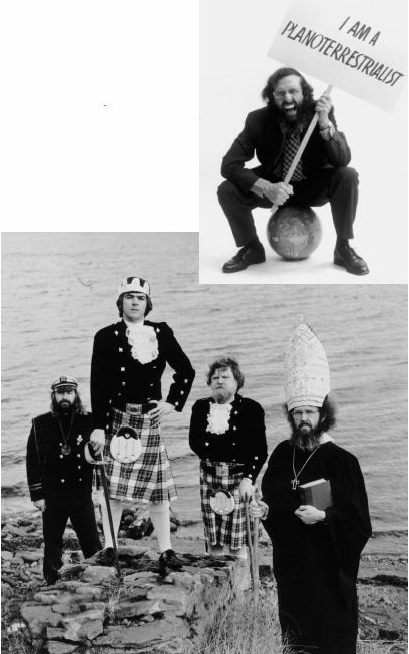 [Leo] Ferrari [President of the FESC; pictured above in the top inset and below wearing the papal hat] was soon to cause more consternation through an interview with J. William Johnson, published in the Saturday Review of Sciences. Johnson began the piece by noting his bewilderment when he heard a ‘slightly nasal’ Australian voice emanating from his television set: ‘We openly proclaim that the Earth not only is flat but may well be square,’ Ferrari had reportedly declared. When they later met in person, Ferrari insisted he was quite serious about the statement and presented Johnson with a flyer outlining the society’s aims. ‘You think we’re crazy, don’t you?’ Ferrari asked.

‘On the contrary,’ Johnson had replied, ‘from what I’ve just read, I get the feeling your stand on the shape of the earth is not really what you’re trying to say.’

Ferrari leaped on the point. ‘Exactly,’ he admitted. ‘We’re not really obsessed with the shape of the earth. We say it’s flat to dramatize our desire to keep our God-given senses from being numbed by technology. To provide some resistance to the forces of conformity.’ Echoing the neo-romanticism of radical sixties science critics, Ferrari insisted that the FESC had been established to promote the idea that a scientific world-view was not the only possible perspective. Myths and mystery were dead, he continued, and human world-views required adjustment before rationality ran out of control. ‘Believe what you see!’ he declared; the point was critical thinking. Invoking G. K. Chesterton’s remark that ‘A man should always question the strongest beliefs of his age, for those convictions are invariably too strong’, Ferrari said that the FESC intended to present an annual award to those who ‘defied the dictates of popular prejudice and made an outstanding contribution to the Cause of Common Sense’.

One can appreciate the author’s remark that the mock society’s aims were not so very different from those of the real nutters. The two ways to the “Truth”, though, were of course completely at odds and any serious flat-earther who naively missed the point of the Canadian society was refused membership.

The themes raised in Christine Garwood’s book touch on questions important to all of us, including those that relate to the reason for this blog. I suppose my Damascus Road experience was when I finally came to realize how much information (in particular about religion and what it meant for one’s self-identity and understanding of how people and the world work) that I had taken for granted. There are many far more important things to blog about than biblical themes but many others are already doing an excellent job in those areas. There is little I can add to those voices through this medium.

Any post on flat earthers cannot be complete unless it explains something of how it is possible for anyone to have such a contrary view:

Another little thing I learned from reading this work. It really is pointless and very likely counterproductive in a number of ways to bother engaging seriously in any extended one-to-one debate with those who “will not see”. Darwin was right, as Wallace appears to have finally learned in the end. I don’t think Patrick Moore troubled himself by trying too strenuously to argue them out of their beliefs.

4 thoughts on “Inside the Minds of Flat-Earthers”