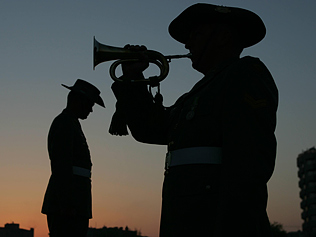 I recall as a little boy at school grown men leading solemn ceremonies pleading with us in prayerful tones never to forget the sufferings and horrors of war — Never again. Futility was a word I learned the meaning of. It was a moment for tears. The message was clear. Hate war. The idea of following the “example” of those who suffered (both those dead and living) was the very antithesis of what the day was all about.

Today Remembrance Day falls at a time our government is eager to send more soldiers to war, to be part of the fight, to show our loyalty to the cause. Volunteers in the services are sent with good pay.

How the message has changed today.

The Great War which we remember today . . . was also the crucible in which our nation was formed.

It was sacrifice on a stupendous scale. . . .

As well as suffering, there is another legacy; a legacy of comradeship under fire, of service and sacrifice, of duty in a good cause.

Of the original ANZACs the official war historian Charles Bean said, “their example rises, as it will always rise, above the mists of ages; a memorial to great hearted-men and for their nation, a possession forever.”

Now the suffering is presented as not an obscene horror never to be repeated but a noble nation-making, character-building experience.

It was not a horrific waste; it was all for a good cause. It was a duty.

The voices of those who led services when I was a little boy are lost. They are replaced by the words of the leading propagandist historian of the day, the one whose accounts were carefully censored so as to encourage more volunteers to go and kill and die, Charles Bean.

War is not something to be avoided. We must be worthy of the example of past soldiers.

Wars are now the positive molders of our character, our national identity, our heroism. Somehow the lessons of “never again” and the “waste” and “futility” have been lost.

Those lessons have been replaced by their very opposites. I would have expected mass protests at every suggestion from our politicians that we should return to another war.

Or am I imagining a past that never existed?