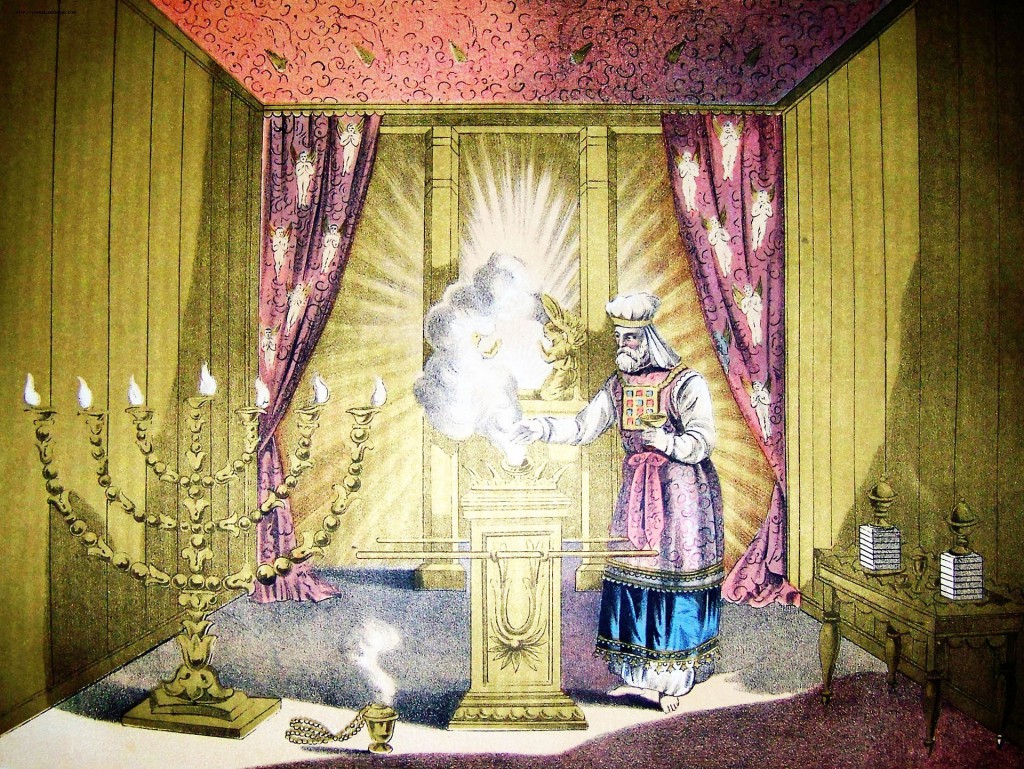 So what is the connection between Daniel 7 and a high priest?

Once the essentially temple-centred world of Jewish apocalyptic literature is appreciated, a new perspective on the problem of the identity of  the ‘one like a son of man’ of Dan. 7.13 emerges.’

This figure is neither a purely suprahuman angel nor is he simply a symbol for Israel and her coming vindication. Rather, this individual is Israel’s true eschatological high priest.

His coming to God with the clouds evokes the Day of Atonement when the high priest enters God’s presence surrounded by clouds of incense. The scene in Daniel 7 recalls the age-old Chaoskampf when God does battle with the forces of watery chaos and climactically defeats them at his holy mountain.

Where it used to be the king, as the representative of the nation, to whom God then delegated all (cosmic and historical) authority, now it is Israel’s high priest who receives, sacramentally so to speak, that authority on Israel’s behalf He does so as the truly human being—the image of God of Gen. 1.26-27—over against the bestial nations.^ Their being is grounded in chaos whence they emerge. His being is taken up into the life of God himself.

Indeed, his heavenly, cloud-borne, appearance—that is sometimes adduced as evidence that he is an angel—befits his high priesthood since in so many ways that is a divine office. He comes to God as if he is the divine warrior. And as near-contemporary texts show, on his return to the people from the inner sanctuary the high priest is a plenipotentiary of God’s own power and Glory: he comes from ‘heaven’ back to ‘earth’. The implicit liturgical scene fits the text’s life-setting: the day that the high priest fully comes to God is Yom Kippur and this is also the day that provides a cosmic purification of a world that has been defiled by pagan impurities.

This high priestly reading of Daniel 7 is natural for Jews who inhabited the world of temple and liturgy that modem scholarship has been so hesitant to enter.  (pp. 57-59)

A concluding sentence at the end of a lengthy footnote informs me that “the Pentateuch sets up Aaron as the true Adam”. That’s something I need to investigate. The same passage concludes from this that it would thus be more likely that the Septuagint of Numbers 24:7, 17 — with its explicit reference to the human nature of a future figure commonly interpreted as messianic — predicts “a priest or a priest and a king” than a king per se.

But let that be by the by for now.

The high priest interpretation of the Son of Man in Daniel 7 was well understood in the first century among the earliest Christians, Fletcher-Louis informs us:

The Gospels also associate the Son of Man with the risk of blasphemy (Mark 14:62-64; Luke 12:10). Slandering the representative of God occupying the office that bore the image of God was worthy of death.

Luke 17:24 associates the Son of Man with thunder and lightning, trappings of glory worn by the high priest:

So too the high priest (according to Josephus) appears as the divine warrior surrounded by thunder and lightning that are symbolized by his pomegranates and golden bells (War 5.231; Ant. 3.184).

(I leave aside for now certain beliefs among some sects that the Son of Man was expected to suffer.)

Another indicator of the Son of Man being identified with the high priest is found in Mark 10:45

For even the Son of Man did not come to be served, but to serve, and to give [δοῦναι] his life as a ransom [λύτρον] for [ἀντὶ] many.

This saying has puzzled commentators because, whilst direct linguistic associations to the suffering servant song of Isaiah 53 are lacking, it is really hard to know what Jesus means. The saying is difficult in large part because the use of the word λύτρον for a human person, rather than for a pecuniary object, is almost unprecedented.

The only parallel to someone giving themselves as this kind of ‘ransom’, is the stipulation in Numbers 3 that the tribe of Levi is to be given (in 3.9 the tribe are δόμα δεδομένοι, ‘given for a gift’) to serve (3.7-8: לַעֲבֹ֖ד, LXX has ἐργάζεσθαι ‘to work’) in the sanctuary where they are to act as ransom monies (λύτρα) in place of (vv. 12,41, 45, ἀντὶ) the lives of the firstborn of the tribes of Israel.

That the Son of Man should act as a λύτρον is therefore fitting if he is of priestly (or Levitical) pedigree.

And a connection between Dan. 7.13 and Numbers 3 is perhaps also forged through the common use of the verbal root קרב ‘draw near’.

The Levites in Num. 3.6 are ‘brought near (הַקְרֵב֙)’ to serve as a ransom for Israel’s firstborn, just as in Dan. 7.13 the one like a son of man ‘came to the Ancient of Days and they brought him near (הַקְרְבֽוּהִי) to him’.

Then there’s another tantalising suggestion in a footnote here:

The sacrificial use of the haphel of קרב, at for example Ezra 6.10, 17, indicates that some might have thought that the ‘one like a son of man’ was sacrificially ‘offered’ to the Ancient of Days (see M. Barker, The Great High Priest: The Temple Roots of Christian Liturgy (London: T.&T. Clark Intemational, 2003, p. 82, and compare the Greek of Theodotian. . . . For the high priest sacrificing himself see Philo, Somn. 2.183, 249; cf. Leg. 2.56.

So Fletcher-Louis informs us that there are many suggestions in the gospels (not all covered in this post) — and we need to add that suggestions are also found outside the gospels — to lead us to understand that Daniel’s Son of Man (who also moves with ease between heaven and earth) is best seen in high priestly terms.

Mark 1.14-6.13 can fairly be treated as a literary unit that is programmatic for the Markan, and the synoptic, profiles of Jesus’ ministry. It contains a great deal that the synoptics have in common with John. It summarizes the key characteristics of the ministry whilst providing stories that exemplify and provide a theological foundation for his distinctive behaviour.

Now see how each of these fulfils a high priestly function. But first I need some sleep. Will spread out some of the explanatory details tomorrow evening.