James McGrath even publishes a diagram to show why literary analysis is irrelevant for historical inquiry. It is assumed that the literary approach does nothing more than explain the literary qualities and narrative structure of the work. It appears in The Burial of Jesus: History and Faith: 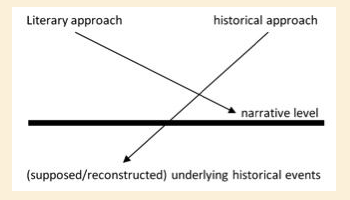 .
McGrath is not alone in this understanding of the difference between literary and historical studies of the Gospels, which is to say that a good number of Christian history scholars do not really understand the nature of historical source material or the fundamentals of how to undertake historical research. I am not saying all biblical scholars fall into this trap, nor that all other types of historians avoid it, since there are indeed a few biblical scholars more critical than their peers and some sloppy historians in other fields who build upon unexamined assumptions.

Jack Miles (born 1942) is an American author and winner of both the Pulitzer Prize and the MacArthur Fellowship. His work on religion, politics, and culture has appeared in numerous national publications . . . . Miles treats his biblical subjects neither as transcendent deities or historical figures, but as literary protagonists. His first book, God: A Biography, won the Pulitzer Prize for Biography in 1996 . . . . (Wikipedia)

What is wrong with the above model? Jack Miles, another scholar discussed by Clarke Owens in Son of Yahweh: The Gospels as Novels, strongly disagrees with the notion that one can validly “see through” the Gospel narratives to history below. He draws the analogy of the text as a stained-glass window: not to be looked through but looked at. According to Clarke Owens this is only “half right”. Owens identifies the flaw in Jack Miles’ analogy: Miles is embracing as a universal what “literary critics would recognize as [only] a theory” of literature — that of “autotelic literature“. That is, the idea that literature can and must be interpreted only within its own boundaries is only one theory among a number of valid ways of reading and understanding literature.

According to Owens, while it is correct that we cannot “look through” a text on the assumption that it is some sort of window to a real world of past persons and events, it must be recognized that there are ways literature can serve as historical sources — only not in the way biblical scholars too often assume.

The message of the stained glass window

Clarke Owens, writing as a literature scholar, reminds us that there are certain types of literature (e.g. allegory) acknowledged as taking their meaning and intended interpretations from reference points outside themselves. (One might call this type heterotelic, referring to something outside itself, as opposed to autotelic.) So Owens disputes the idea of Jack Miles that literature must be read exclusively “as literature” and without reference to history.

Owens turns Miles’ analogy of the stained-glass window against his “literary approach only” approach to the biblical literature:

The disingenuousness or perhaps the naiveté of Miles’ type of quixotism is suggested by the simile he employs to illustrate it. Literary critics are not people who stare mindlessly at stained-glass windows while historical critics look through the colored glass at objects behind them.

The critical mind, whether historical or literary, does not “see through” so much as it sees in. The stained glass window does not exist merely to be stared at, but to be contemplated. It has a function and, in many cases, a narrative content. There are stained glass windows which depict scenes from the Bible, others which merely present skillful geometric designs. We are interested

(From Son of Yahweh, my formatting and bolding)

Substitute the above for their equivalents in relation to the Gospels.

If there is history to be found as a result of our reading the Gospels it will emerge through our bringing to our reading questions suggested by the interests above.

One biblical historian, Shelly Matthews, recognizes something of the necessity of such an approach when she writes:

[Penner] asks, “Could the narratives be historically accurate and true? Absolutely. Could they be completely fabricated? Absolutely. COuld the truth rest somewhere in between? Absolutely. The problem of course is that it is impossible to prove any of these premises.” While conceding the impossibility of precise and certain answers to these questions, I do not view that impossibility as an obstacle to writing historical narrative but rather as a reason to frame historical questions differently. . . . . (Perfect Martyr: The Stoning of Stephen and the Construction of Christian Identity, p. 23)

Matthews writes as a post-modernist historian and as such the sorts of questions that lead to historical understanding have to do with the “literary plot” and questions of power facing the author:

Compelling questions by which to frame a study of the Acts narrative of Christian origins include the following: What is it that historians claim to know about what happened? What frames of reference are utilized for situating these historical narratives? What are the proper names assigned to persons and social groups? And what causal links and explanatory relationships are emplotted? Because the choice to privilege one historical narrative necessarily involves the suppression of other possible tellings, the question arises whether and how one might do justice to submerged voices and alternate versions of past human experiences and events. Because historical narratives are written in the service of the present and have material effects, it seems important to ask who benefits from a particular telling of history and who might be harmed by it; does it inspire people to struggle or promote the status quo. (p. 23)

We will return to how such questions lead her to write a historical analysis of the significance of Acts’ story of the stoning of Stephen for the early Church in a future post. We cannot know any “history about” the actual stoning of Stephen but we can discern historical information about the reason Acts was written the way it was, with the content it contains and the way in which it is presented. As we can reasonably guess from the title of her book, this history has much to do with how the Acts narrative contributed towards an emerging new sense of identity of Christians at the time it was written.

Back to Clarke W. Owens

Back to Clarke Owens, we will see in posts I am about to write as follow-ups to this one how the questions of interest to the stained glass windows have their equivalents in our critical reading of the Gospels — and how they yield a quite different historical understanding of Christian origins than we gain merely by paraphrasing the narratives.

In the next post in this series we will look at what Owens sees as the highly problematic consequences of reading and studying the Gospels as parts of a canon, as texts forever bound within the covers of the Bible.

17 thoughts on “Gospels As Historical Sources: How Literary Criticism Changes Everything”