The passages in question are located in chapter 11 of the Vision. In the L2 and S versions the Lord’s mission in the world is presented by a single sentence:

2… And I saw one like a son of man, and he dwelt with men in the world, and they did not recognize him.

In place of this the Ethiopic versions have 21 verses, 17 of which are devoted to a miraculous birth story:

2 And I saw a woman of the family of David the prophet whose name (was) Mary, and she (was) a virgin and was betrothed to a man whose name (was) Joseph, a carpenter, and he also (was) of the seed and family of the righteous David of Bethlehem in Judah. 3 And he came into his lot. And when she was betrothed, she was found to be pregnant, and Joseph the carpenter wished to divorce her. 4 But the angel of the Spirit appeared in this world, and after this Joseph did not divorce Mary; but he did not reveal this matter to anyone. 5 And he did not approach Mary, but kept her as a holy virgin, although she was pregnant. 6 And he did not live with her for two months.

7 And after two months of days, while Joseph was in his house, and Mary his wife, but both alone, 8 it came about, when they were alone, that Mary then looked with her eyes and saw a small infant, and she was astounded. 9 And after her astonishment had worn off, her womb was found as (it was) at first, before she had conceived. 10 And when her husband, Joseph, said to her, “What has made you astounded?” his eyes were opened, and he saw the infant and praised the Lord, because the Lord had come in his lot.

11 And a voice came to them, “Do not tell this vision to anyone.” 12 But the story about the infant was spread abroad in Bethlehem.

13 Some said, “The virgin Mary has given birth before she has been married two months.” 14 But many said, “She did not give birth; the midwife did not go up (to her), and we did not hear (any) cries of pain.” And they were all blinded concerning him; they all knew about him, but they did not know from where he was.

15 And they took him and went to Nazareth in Galilee. 16 And I saw, O Hezekiah and Josab my son, and say to the other prophets also who are standing by, that it was hidden from all the heavens and all the princes and every god of this world. 17 And I saw (that) in Nazareth he sucked the breast like an infant, as was customary, that he might not be recognized.

18 And when he had grown up, he performed great signs and miracles in the land of Israel and (in) Jerusalem.

19 And after this the adversary envied him and roused the children of Israel, who did not know who he was, against him. And they handed him to the ruler, and crucified him, and he descended to the angel who (is) in Sheol. 20 In Jerusalem, indeed, I saw how they crucified him on a tree, 21 and likewise (how) after the third day he and remained (many) days. 22 And the angel who led me said to me, “Understand, Isaiah.” And I saw when he sent out the twelve disciples and ascended.

(M. A. Knibb, “Martyrdom and Ascension of Isaiah: A New Translation and Introduction,” in The Old Testament Pseudepigrapha, edited by J.H. Charlesworth, pp. 174-75.)

One Substitution or Two?

Most scholars think the L2 and S version of the Lord’s earthly mission is far too brief to be original. The foreshadowing in the Vision “expects some emphasis on the Beloved assuming human form as well as some story of crucifixion” (p. 483, n. 56). But instead L2 and S give us what looks like some kind of Johannine-inspired one-line summary: “he dwelt with men in the world” (cf. Jn. 1:14). Those who think the Ethiopic reading represents the original see the L2 and S verse as a terse substitution inserted by someone who considered the original to be insufficiently orthodox.

But from the recognition that 11:2 of the L2/S branch is a sanitized substitute, it does not necessarily follow that 11:2-22 in the Ethiopic versions is authentic. That passage too is rejected by some (e.g., R. Laurence, F.C. Burkitt). And although most are inclined to accept it as original, they base that inclination on the primitive character of its birth narrative. Thus, for example, Knibb says “the primitive character of the narrative of the birth of Jesus suggests very strongly that the Eth[iopic version] has preserved the original form of the text” (“Martyrdom and Ascension of Isaiah: A New Translation and Introduction,” in The Old Testament Pseudepigrapha, edited by J.H. Charlesworth, p. 150)

I agree that both the E and L2/S readings at 11:2 could be replacement passages, but I think Hall’s advice not to speculate should be disregarded, for it is his very observations about the Vision that provide some good reasons to suspect that 11:2-22 did not belong to the original text. It is he who points out that foreshadowing and repetition characterize the Vision—except when it comes to the birth story! END_OF_DOCUMENT_TOKEN_TO_BE_REPLACED 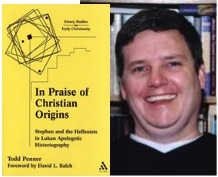 I’ve been preoccupied with catching up with what certain New Testament scholars have writing about the way ancient Greek and Roman authors wrote history and the relevance this has for how we interpret Acts and the Gospels and what they can tell us about Christian origins. This all started after I began reading and posting on some works from the Acts Seminar. One work has led to another and back again and I think I’m ready to resume.

In an earlier post I quoted something written by Dr Todd Penner that encapsulated a conclusion I have been persuaded to reach not only about one episode in Acts but about the entirety of Acts also about the Gospels:

Attempts by Hengel and others to intuit their way behind the stories aside, the unit is too tightly knit to allow one to go beyond what is given in the narrative itself. If the dominant view in Acts scholarship is that one can separate out the core historical events from the Lukan redaction, this study argues for the futility of such attempts. (In Praise of Christian Origins, pp. 331-332, my formatting and bolding)

Dr Penner covers a lot of ground, surveying ancient commentaries on what made for good and bad writing of historia/history. I cannot cover any of that in this post. What is particularly significant about his argument, for me, is the assumptions and logic he brings to his reading of Acts. He takes readers back through a time tunnel to show them the origin of modern scholarly assumptions that Acts is fundamentally (beneath all its fantastical tales of miracles and romantic adventures) based on historical sources. If we read “beneath” the text then we will begin to glimpse genuine historical data related to Christian origins.

In so doing he leaves the alert reader with the awareness that the a priori assumption of historicity cannot be justified. At the same time, being able to explain narrative details in terms of literary artifice does not mean that they are not also, at some level, based on genuine historical events. What we are left with, however, is an explanation that does work and that can be justified (the creative literary one), and the question of historicity left hanging. Readers who approach Acts with Christian faith need not be alarmed.

As I read Penner’s arguments I wondered if he would be prepared to apply his same pertinent critical questions to the Gospels. As far as I can see there is no reason to confine his approach to Acts.

Not yet, but scholars like Thomas L. Thompson, Neils Peter Lemche, Philip Davies have demonstrated the literary (non-historical) character of much of the Old Testament, and a few have now published similar arguments about Acts. Surely, eventually, the methods applied in these instances will have to catch up one day with our analysis of the Gospels.

As I was reading Penner’s In Praise of Christian Origins I was imagining illustrative diagrams that would capture some of the multilayered complexity of the author’s literary creativity. I’ve added the result below. END_OF_DOCUMENT_TOKEN_TO_BE_REPLACED