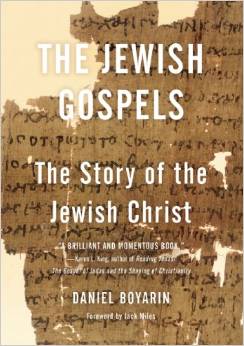 Note that there is more than one throne set up at the beginning. The older one is seated on his throne; so the younger one has his own throne and he is invested by the older one with an eternal dominion over the entire world.

In time — but not so understood by Daniel — this vision will become the meeting of God the Father with his Son.

Scholars have a long tradition (from ancient to modern times) of interpreting the “one like a son of man” as a symbol of the people of Israel during the Maccabean rebellion who eventually take control of their own kingdom after the demise of their Syrian rulers.

Others have taken an opposing view: this figure is not a symbol but a literal divine being. Boyarin cites a fourth century Persian Church Father as one of the earliest of these interpreters — Aphrahat. Opposing what was probably a Jewish interpretation Aphrahat is quoted as saying

Have the children of Israel received the kingdom of the Most High? God forbid! Or has that people come on the clouds of heaven? (p. 39)

Clouds, and riding on clouds. These are the signs of divine appearances or theophanies. Scholar J. A. Emerton nailed it when he wrote

It is almost impossible to read the narrative here of the setting up of thrones, the appearance of the Ancient of Days on one of them, and the coming of him of the one like a son of man apart from stories of the investiture of young gods by their elders, of close gods by transcendent ones. (p. 40)

Even some of the Rabbis of the fifth and sixth century or earlier read the Daniel passage this way. Boyarin quotes from the Babylonian Talmud

One verse reads: “His throne is sparks of fire (Dan. 7:9) and another [part of the] verse reads, “until thrones were set up and the Ancient of Days sat (7:9). This is no difficulty: One was for him and one was for David.

As we learn in the ancient tradition: One for him and one for David, these are the words of Rabbi Aqiva. Rabbi Yose the Galilean said to him: Aqiva! Until when will you make the Shekhina profane?! Rather, One was for judging and one was for mercy.

Did he accept it from him, or did he not?
Come and hear! One for judging and one for mercy; these are the words of Rabbi Aqiva. [BT Hagiga 14a]

(That is, both rabbis understood the Daniel passage was theophany, an appearance of a deity. R. Aqiva sees two divine figures in heaven, one God the Father and the other an apotheosized King David. Rabbi Yose was shocked at this view.)

Aphrahat wrote in the fourth century but his interpretation continues to be supported by some modern scholars. Matthew Black is one:

This, in effect, means that Dan. 7 knows of two divinities, the Head of Days and the Son of Man.  (My bolding. From “The Throne-Theophany, Prophetic Commission, and the ‘Son of Man,'” in Jews, Greeks, and Christians: Religious Cultures in Late Antiquity, 1976, 61)

Personally I’m in two minds on this one. Is it possible that the “son of man” image of Daniel 7 was originally conceived as a symbol? He does after all emerge as a foil against four animal images representing gentile kingdoms. But on the other hand I recently posted clear evidence that the author was drawing upon the image of Ezekiel’s chariot vision thus suggesting he certainly knew of views of the godhead that were unconventional and was prepared to work with them. (There are also well-known similarities in Daniel 7 with the Canaanite gods, El the aged one and the younger conqueror Baal, the rider of clouds.)

In a future post I’ll show how Boyarin’s interpretation here affects his view of some of the “son of man” sayings in the Gospels and how he challenges some conventional views of Christian scholars.

The main point of these posts is not necessarily what the author of Daniel or Ezekiel themselves thought but what we can clearly see of the way various Jewish authors and groups through the Second Temple era came to interpret passages like this one in Daniel.