We compare Rahab of Jericho fame, Jonah and the exploits of David with their classical counterparts.

The Trojan War and Fall of Jericho 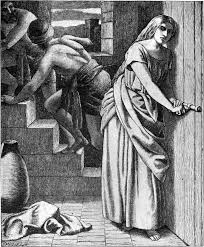 When Agamemnon with his massive Greek army reached Troy he first sent two envoys, Menelaus and Odysseus, to negotiate for the return of Helen. One of the wisest of Trojan elders, Antenor, received them with admirable hospitality.

Some more sensationalist accounts say Antenor rescued the Greek envoys from death; others say he betrayed Troy by letting the Greek warriors out of the Wooden Horse.

The significant point is that orders were given for Antenor and his family to be spared when the Greeks took over the city. In order to identify their house a leopard skin was hung in front of it. After the sack of Troy Antenor took his family to establish a new home in Thrace.

It has a remarkable parallel in the biblical account of Joshua’s capture of Jericho. (p. 489)

Joshua sent two spies into Jericho once his army was in a position to attack the city. These spies received hospitality from Rahab the prostitute. When the king of Jericho heard of this he sent Rahab a message ordering her to give them up but she protected them instead and helped them escape.

In return Rahab asked that she and her family be spared in the attack, since she knew that Israel was destined to destroy the city. Her house was identified by a crimson cord on the window. She and her family were spared and began a new life in Israel.

The analogies with the Greek myth are extensive. Menelaus and Odysseus, who come to Troy before the war has started, correspond to the two Israelite spies. The kindly Antenor, who gives them lodging, saves them from death at the Trojans’ hands, and in some accounts even assists the enemy to take his city, corresponds to Rahab. The same agreement is made, to spare not just the benefactor but the benefactor’s whole family, with a visible sign being displayed on the house to identify it. The city is taken and burned, but the family is spared and settled elsewhere. (p. 489)

The singer Arion was returning by ship to Corinth after a concert tour when he learned that the sailors planned to rob him and throw him overboard. He agreed to jump but first stood to sing a song that began with a praise to Apollo.

After he jumped a dolphin picked him up and carried him safely to shore.

The story is at least partially parallel to that of Jonah. (p. 441)

Jonah was thrown overboard to appease the god (Yahweh) and swallowed by a “great fish”. After three days inside the fish Jonah sang a hymn and was consequently disgorged to terra firma.

It is noteworthy that both stories involve the performance of a religious song by the hero. (p. 441)

In the Iliad the elderly Greek hero reminisces on a battle in his youth.

Here the parallels with David and Goliath are all the more noticeable. . . (p. 370)

A giant warrior in full armour — Ereuthalion, Goliath — stepped forth to challenge all the opposing heroes to single combat. The entire opposing army to trembled. None dare take him on except this youngest son. 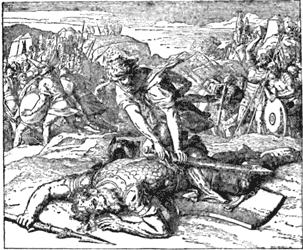 In each case the young man slew the giant with divine help, leaving him sprawled out on the ground.

The same Nestor on another occasion was dismissed from the battle by King Neleus because of his youth and inexperience in war. Saul at first dismissed David for the same reasons. Nonetheless, Nestor went out without a chariot to challenge the enemy cavalry leader. Nestor accordingly appropriated the enemy’s own chariot, just as David faced Goliath without a sword and appropriated Goliath’s sword.

In both cases the enemy, seeing that their champion has fallen, turn and flee, pursued and slaughtered by the Pylians and the Hebrews respectively. In both narratives the pursuit continues to a certain specified place; the victors return from there with their booty, and the young hero is acclaimed by the people. . . (p. 376)