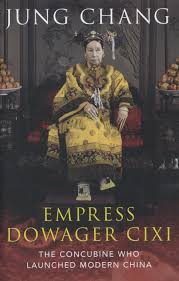 Among the reforms she was responsible for:

Not all of these were carried out perfectly. She was hampered by the realities and tensions of having to rule through young emperors — first her own son and then through an adopted son — who were widely regarded as unsuitable heads of state. The latter was also susceptible to being manipulated by court — in particular pro-Japanese — intrigues. There were times when she had to retire to the seclusion of the harem and let younger heads be led by less wise advisers who did let their hatred of the Westerners cloud their judgments.

The most serious mistake of her career was succumbing to pressure to support the Boxers in their efforts to drive out the Westerners. Significantly she acknowledged this mistake and soon returned China to its march towards modernization and diplomatic relations with other world powers.

Some interesting details along the way:

The final paragraphs of the book:

The past hundred years have been most unfair to Cixi, who has been deemed either tyrannical and vicious or hopelessly incompetent — or both. Few of her achievements have been recognized and, when they are, the credit is invariably given to the men serving her. This is largely due to a basic handicap: that she was a woman and could only rule in the name of her sons — so her precise role has been little known. In the absence of clear knowledge, rumours have abounded and lies have been invented and believed. As Pearl Buck observed, those who hated her were simply ‘more articulate than those who loved her’. The political forces that have dominated China since soon after her death have also deliberately reviled her and blacked out her accomplishments — in order to claim that they have saved the country from the mess she left behind.

In terms of groundbreaking achievements, political sincerity and personal courage, Empress Dowager Cixi set a standard that has barely been matched. She brought in modernity to replace decrepitude, poverty, savagery and absolute power, and she introduced hitherto untasted humaneness, open-mindedness and freedom. And she had a conscience. Looking back over the many horrific decades after Cixi’s demise, one cannot but admire this amazing stateswoman, flawed though she was.

Hear also a podcast interview with the author: Empress Cixi – the concubine who launched modern China

7 thoughts on “Rewriting the History of Modern China”