(The Book of Parables is also known as the Similitudes of Enoch. In this post I will follow Waddell and use BP to refer to this text.)

Some readers will immediately ask if the Enochic Book of Parables is too late. Is it not from a post-Gospel era? Waddell informs those of us who still think this that we are out of date:

Only recently has specific research on the date of BP created a shift in the scholarly consensus among specialists of the Enoch literature. This consensus established the messiah traditions of BP, if not the text itself, to a date prior to Paul. (p. 22 of The Messiah)

Waddell’s book was published in 2010 and his claim about the scholarly consensus is supported by reference to half a dozen articles in Boccaccini’s Enoch and the Messiah Son of Man (2008) among a list of earlier publications.

To me, and I am sure to many others, questions of dating are important. So this post attempts primarily to explain Waddell’s rationale (presumably shared by many of his peers) for dating the BP to a pre-Christian era. The next post will begin to examine the nature of the Christ/Messiah as understood before Paul among the Jews associated with this document.

The Date of the Parables of Enoch

One of the reasons many scholars have long thought the Parables of Enoch post-date the Gospels is the failure to find this text among others from the Book of Enoch in the Qumran caves. Other sections of 1 Enoch were found there, but not the Parables. The Parables must have been composed after the demise of the Qumran community, so the argument goes.

Waddell informs us, however, that

at this point in the state of the research the best tool we have for dating BP is historical allusion. (p. 23)

A number of historical allusions have been identified in the BP.

The Parthian forces invaded Judea from the north intending to overthrow the ruling high priest, Hyrcanus II, and to install the last scion of the Hasmonean ruling party, Antigonus, nephew of Hyrcanus.

When the high priest Hyrcanus fell at the feet of Antigonus, Antigonus “bit off his ears” in order to permanently disqualify him from the priesthood then exiled him to Babylon. (The Jewish Virtual Library says he was castrated. Were “ears” a euphemism?)

So at a time of Parthian plundering of Judea and capture of Jerusalem, the High Priest of the Jerusalem Temple was violently assaulted and deposed.

Compare an earlier passage in BP. 1 Enoch 46:4-5 appears to depict the cosmic judgment that is soon to follow the events of 40 B.C.E.:

4, And this Son of Man whom thou hast seen
Shall †raise up† the kings and the mighty from their seats,
[And the strong from their thrones]

And shall loosen the reins of the strong,
And break the teeth of the sinners.

5. [And he shall put down the kings from their thrones and kingdoms]
Because they do not extol and praise Him,
Nor humbly acknowledge whence the kingdom was bestowed upon them.

Waddell notes the similarity of the expressions used here and those in 1 Enoch 56:5 (see also the table above):

They shall stir up the kings, so that a spirit of unrest shall come upon them,
And they shall rouse them from their thrones

The difference is that in Enoch 46 the Son of Man is delivering judgment upon them.

7. And these are they who †judge† the stars of heaven,
[And raise their hands against the Most High],
And tread upon the earth and dwell upon it.

And all their deeds manifest unrighteousness,
And their power rests upon their riches,
And their faith is in the †gods† which they have made with their hands,
And they deny the name of the Lord of Spirits,

8. And they persecute the houses of His congregations,
And the faithful who hang upon the name of the Lord of Spirits.

Waddell finds “especially appealing” the possibility that the second point, “raising their hands against the Most High”, is explained by the violence against and overthrow of the High Priest John Hyrcanus, given that the BP contains no hint of anti-priestly or anti-temple polemics. The BP has not been found among the Qumran scrolls, and the Qumran community is well-known for its hostile attitude towards the Temple of this Second Temple era.

It is entirely possible that the community responsible for producing BP was in some way a part of the mainstream Essene movement that retained some contact with the Jerusalem temple. If this is the case, then it is not in any sense a stretch of the imagination that the author(s) of BP might have considered an attack on the high priest in some sense an attack on the Most High. (p. 27, The Messiah)

If BP does indeed refer to the events between 53 and 40 B.C.E. then we may reasonably conclude that they were relatively recent from the author’s perspective. (I note that 1 Enoch 46 would anticipate an imminent eschatological judgment upon the marauding Parthians and the new tyrannical ruler, Antigonus, they installed in power.)

This would further suggest a date for BP much closer to sometime within the latter half of the first century B.C.E. after the Parthian invasion of 40. (p. 27, The Messiah)

If this section of the First Book of Enoch is best dated to within the final decades of the first century before the turn of the era, then the implications for prevailing Jewish messianic ideas extant at the time Christianity was emerging are (I think) enormous.

This is not, per se, a mythicist argument. Don’t misunderstand. I am quite sure James Waddell would be bemused if he thought his arguments were used for any such end. There are, after all, some distinctive differences between Paul’s Christ and the Christ found in the Parables. Paul’s Christ was crucified and resurrected. He did not refer to him as the Son of Man. But the Enochic literature — and other scholars have certainly noted this, in particular Margaret Barker — nonetheless has major implications for the origin of a good number of Christian beliefs. The first task is to examine some of the similarities. After that we can ask other questions to help us towards the most likely explanation for those similarities. 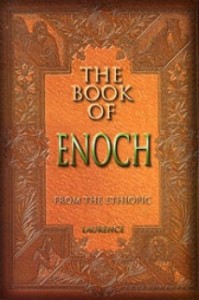 2 thoughts on “Christ Before Christianity, 1: Dating the Parables of Enoch”