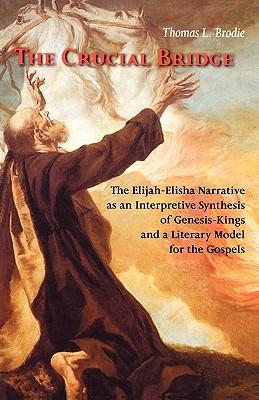 How was Brodie’s method of arguing that the Gospel narrative of Jesus is indebted to the OT narrative of Elijah and Elisha received by his scholarly peers before he published his conviction that there never was an historical Jesus? Was it laughed out of the academy as an unfortunate attack of “parallelomania” (as McGrath would seem to think it should be now that he classifies Brodie as an intellectual leper for denying the historical existence of Jesus)?

Thomas Brodie argues that the Old Testament double narrative of Elijah and Elisha lies behind the narratives of Jesus in the synoptic gospels. My previous post included references to this in extracts from reviews of The Birthing the New Testament. Brodie had earlier published a smaller volume outlining this particular case, The Crucial Bridge, and this post shares some details of scholarly reviews of that volume.

Anyone who has used the online Historical Commentary on the Gospel of Mark knows that its author, Michael Turton, has made numerous references to The Crucial Bridge. Jacob Aliet in his review of this commentary notes:

Backed by the works of scholar like Tomas L. Brodie, Turton advances the argument that the author of Mark modeled the events surrounding Jesus on the Elija-Elisha cycle and other Old Testament characters and prophecies. Though he performs a literary analysis on the gospel, Turton’s main objective is using the analysis to help in arriving at a judgement on the historicity of the events and characters in the Markan narrative.

Turton recognized the implications of Brodie’s analysis and did not shy away expressing it.

What needs to be understood is that The Crucial Bridge is only secondarily, even incidentally, an argument that the Gospels of Luke and Mark in particular were influenced by the Elijah-Elisha narrative. It is confined to the concluding 20-page chapter. The main argument (80 pages) examines the literary structure of the Elijah-Elisha section and its relationships with the Primary History (Genesis to 2 Kings).

Moreover, Brodie’s final chapter arguing for a link between the Gospels and the Elijah-Elisha section is actually introduced as an attempt

This proposal by Raymond Brown was published in Perspectives 12 (1971) 98-99 as “Jesus and Elisha”. Brodie notes that other scholars have since agreed with this basic idea:

The point I am making here is that Brodie’s thesis is not unique. It mixes with a respectable scholarly agenda. To dismiss his argument as inept methodologically after he has “come out” to confess his mythicist leanings suggests a base motive at large.

Brodie’s proposes two strands of indebtedness to this OT narrative: the Gospels of Luke and Mark appear to make independent use of it. This leads Brodie to propose a Proto-Luke account or gospel that was known to both evangelists. Such an exploration is well beyond the scope of The Crucial Bridge so Brodie’s treatment of the relationship between the Old and New Testament accounts is kept to the barest outline. (The detailed argument for an Elijah-Elisha based Proto-Luke appeared as Proto-Luke. The Oldest Gospel Account: A Christ-centred Synthesis of Old Testament History Modelled Especially on the Elijah-Elisha Narrative. Introduction, Text, and Old Testament Model, 2006.)

Two scholarly reviews of The Crucial Bridge that I found take (curiously) opposing views as to the book’s strengths and weaknesses.

By contrast, Sonya Quitslund makes the reverse assessment. For most part the parallels between the Elijah-Elisha narrative and the Primary History are “clear and quite convincing” (with a few questionable ones admitted as such by Brodie), while Brodie’s comparison of the EE narrative with the Gospels is the “weakest” part of the book.

The formatting and emphases in the excerpts are my own.

The more detailed a scholarly argument may be, the less likely it is to convince the readers and the more likely it is to be wrong! This aptly describes Brodie’s thesis. Many of his suggestions are cogent, but the overall theory remains quite unconvincing. Simply put, he believes the Elijah-Elisha cycle has been shaped to follow the sequence of narratives of the Primary History, Gen through 2 Kgs, which also includes narratives that follow the Elijah-Elisha cycle. . . . . Brodie also provides two other literary-structural arguments.

These last two arguments are cogent, but his primary argument appears rather tenuous, especially in light of the detail to which he develops the parallels between the Primary History and the Elijah-Elisha cycle. All biblical scholars concur that there are inter-textual relationships between various narratives in the biblical text. . . .

But to keep his theoretic model intact some incongruous equations have to be made:

However, Brodie does provide good examples which merit our attention, some of which were isolated by scholars in the past, including:

Brodie does establish that certain accounts in the Elijah-Elisha cycle have literary and form-critical connections to other biblical accounts. . . . .

Brodie’s work deserves serious consideration for the suggestive observations he makes on specific texts which indeed reflect inter-textual exegesis. His work, however, could have been more valuable had he developed his analysis of individual texts in detailed fashion (in a scholarly monograph) rather than simply providing allusions to suggestive textual parallels. Only in a few instances does he flesh his observations out in detail. Nevertheless, his truly cogent observations can inspire insight for further speculation in the current debate about Pentateuchal origins.

The subtitle reveals the ambitious and fascinating project undertaken by Brodie. The book, which is not difficult to read, refers to the works of over ninety scholars and has three indexes. The ‘‘crucial bridge,’’the Elijah–Elisha narrative (henceforth abbreviated as EE), serves as bridge between the foundational narratives of Judaism and Christianity. In this brief monograph B. can only give a summary demonstration, not a full analysis of the immensely complex details of the biblical texts, for the purpose of establishing the unity of the EE narrative, its interpretative synthesis of Primary History (Genesis–Kings), and its function as literary model for the gospels (essentially Luke-Acts and Mark).

. . .  The parallels B. notes [between EE and the Genesis-Kings narrative] are in most cases not only clear but quite convincing, although he admits a few are rather weak and puts question marks beside them. . . .

Brodie’s claim that the EE narrative brings clarity to the Primary History is well taken. The larger history’s stress on kings and armies gives way in 1 Kgs 16:29–2 Kgs 13:25 to the primacy of prophecy as the presence of God’s creative word becomes more tangible, demystifying the role of kings and armies and demonstrating that true kingly power resides with the Word of God. . . .

The ﬁnal chapter is perhaps the weakest. B. looks at the EE Narrative as a model for the gospels, noting that no Greco-Roman model existed. Luke-Acts has eight acts (four in Luke, four in Acts 1–15), thus reﬂecting the structure of EE. Mark’s debt to EE lies more in its spirit-ﬁlled dimension and affirmation that history is affected by God’s word. However, B. admits that the EE narrative is not a full model for the gospel nor necessarily the primary model.

Brodie raises interesting questions and makes no absolute claims for his thesis, realizing that more work needs to be done, especially in terms of establishing a model for the gospels. . . . .

I guess people will have to read The Crucial Bridge for themselves to make up their own minds about the links between the Gospels and the Elijah-Elisha narratives. Or catch up with its later version in The Birthing of the New Testament. Once one starts, however, one soon finds oneself engaging what is often “highly technical argumentation”, or at least general propositions that quickly lead to “highly technical argumentation” the moment their surfaces are scratched. The arguments are not for superficial or impatient minds. To dismiss them without engagement is also a sign of a superficial or impatient mind.

I cannot say that I have explored or grappled with the bulk of the details yet. I can only say I have found some of Brodie’s insights intriguing, some challenging, and some I need to set aside to pick up again when I have more time to enter a very different mental approach to the literature of the Bible. Some books do take longer to read and think about than others.