The only detail so far unexplained in the deactivation of the Vridar.wordpress blog is why I apparently did not receive a warning notice from WordPress itself.

The times below are in Australian Central Standard Time, my local time. (Some images may be over-size for iPad viewing but to reduce them further would make them difficult to read.) 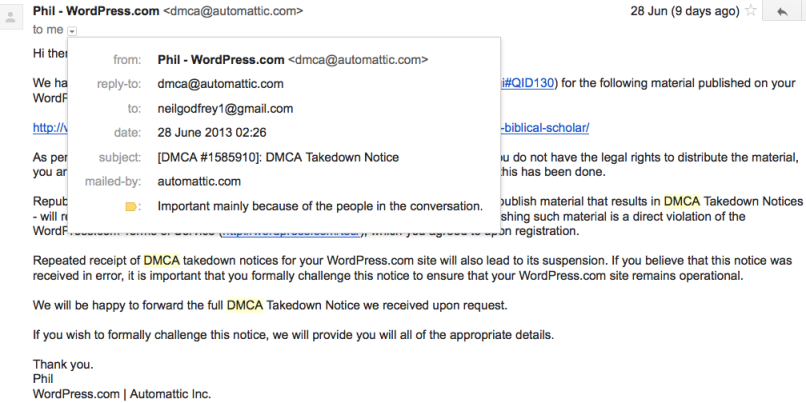 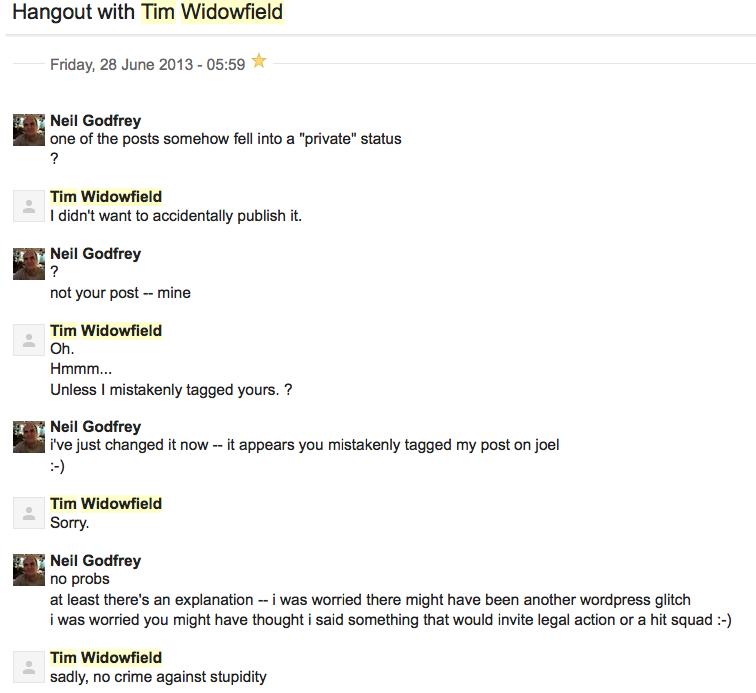 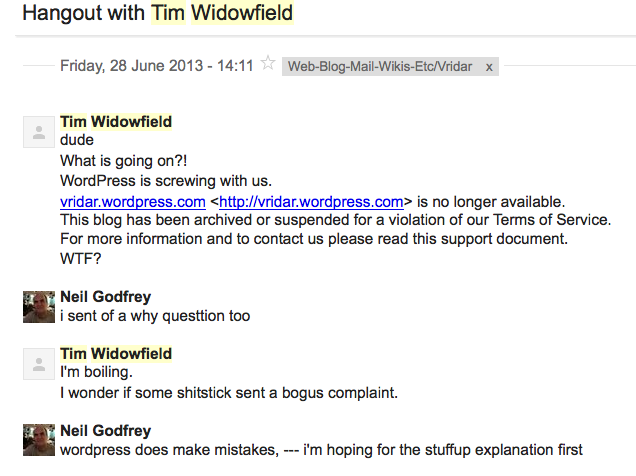 A few minutes later in the same conversation: 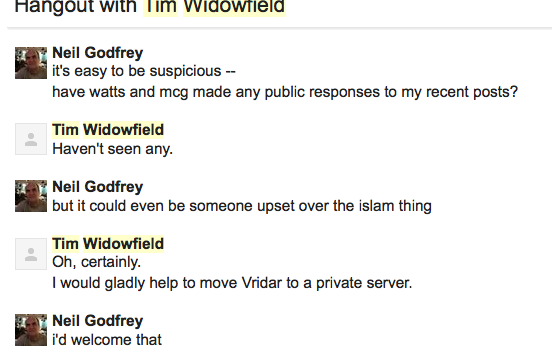 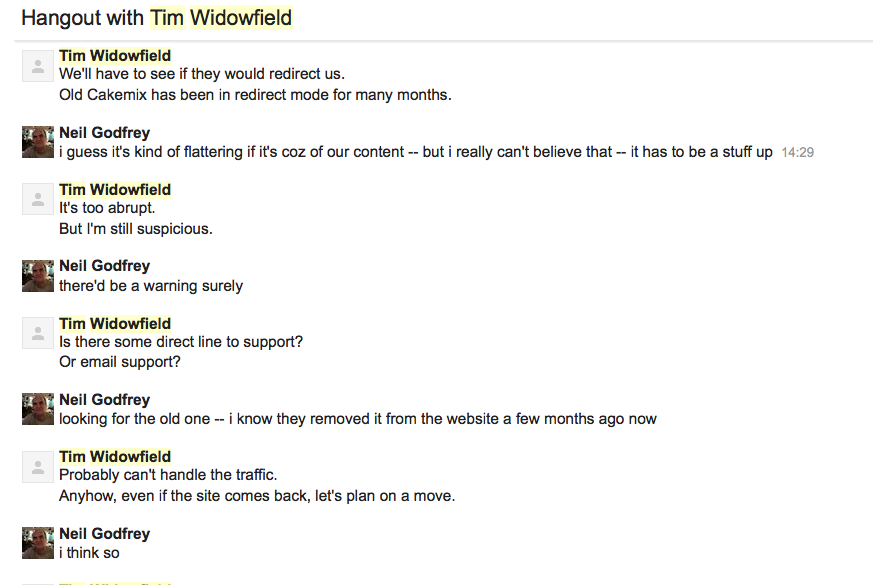 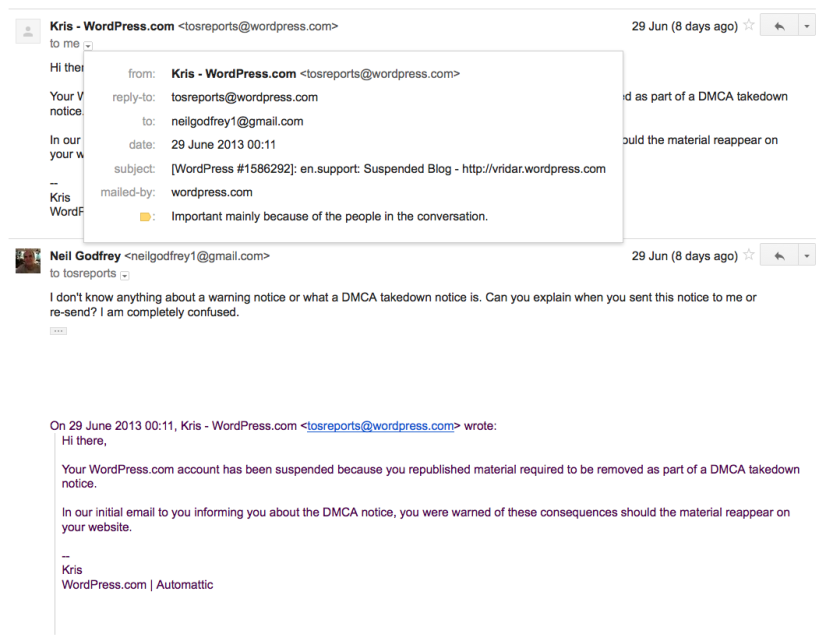 By now WordPress has told me enough for me to know that Joel Watts was behind the initial takedown notice. Stephan Huller had earlier told us that he was sure Joel was behind it all, but we had not wanted to believe him: 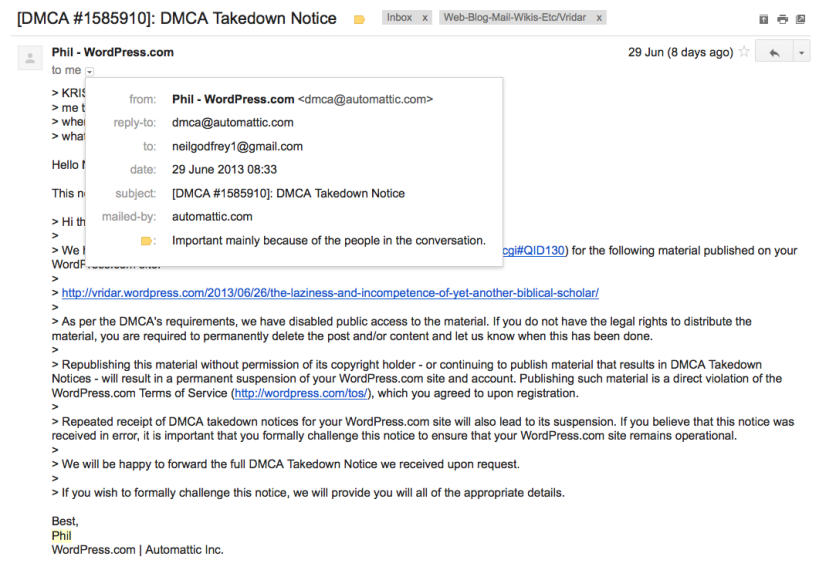 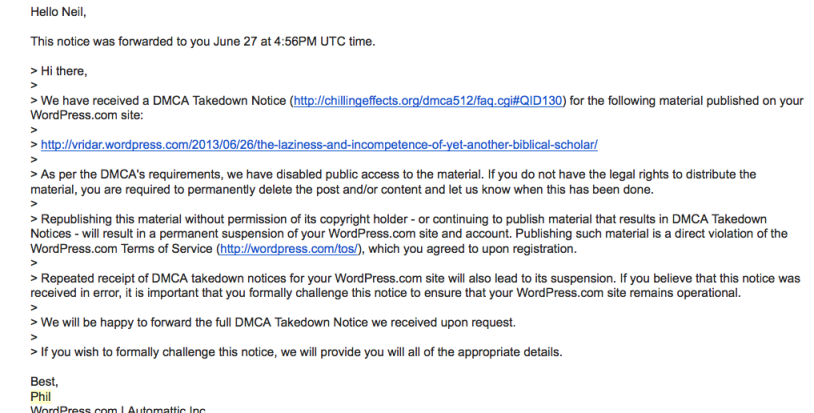 The notice came at 2:30 AM. It was around that time that I saw the blog post was in private, and a few hours later, seeing no reason for it to be in private, I reinstated it to public. I dashed off to work and never took any particular notice of my personal Gmail account until later that day.

So why did I not find the initial DMCA takedown notice?

Believe me, I searched for it! I did a wordsearch on DMCA across all folders in my Gmail account. When that drew a blank — all it showed me was the current conversation I was having with Phil of WordPress/Automattic — I searched through each email in my inbox, spam, bin and All Mail, by Date. There was nothing.

I sent my counter-claim swearing I knew nothing of any prior DMCA take-down warning notice.

What I failed to notice was that the current conversation I was having with Phil had gathered up the original DMCA notice from him and that was hidden behind the current few posts of our to and fro. Phil kept talking about his original notice so I kept leaving that conversation to go look for that notice — and never found it.

It was only some time later that I was reminded that my emails in Gmail are grouped by topic. I have since checked the settings and see they call it “conversation mode”. I had been so used to that layout I had come to assume it was the default way Gmail worked. I had long forgotten I could even change settings for things like that. So each time I was searching for the original DMCA takedown notice I failed to realize it was somehow hidden behind our current conversation.

If I ever did stumble across the original DMCA take-down notice, by that time I assumed it was the notice as re-sent by Phil of WordPress. Notice above that I was beginning to lose sleep over trying to figure out what was going on, still engaged in conversations after 2 AM. I was tired, and also having to prepare for a flight interstate to take care of my house there, and having to prepare and submit my counter-claim before I left. Tiredness and stress did not make for the clearest head.

I’ve been caught out like that before — missing emails because of the way Gmail groups the earlier emails in the single-post front to a conversation thread.

I have since changed the settings on my Gmail to Conversation View Off. I will never turn it on again, ever!

So there you have it.

The sequence of events

So the complete sequence of events, from my perspective, is as follows:

Today I intend to prepare and forward an amended counter-claim to WordPress/Automattic.

14 thoughts on “Last Piece of the Vridar Takedown Puzzle”