This post is a continuation of Invitations to Watch a Martrydom: The Letters of Ignatius (or Peregrinus). . . 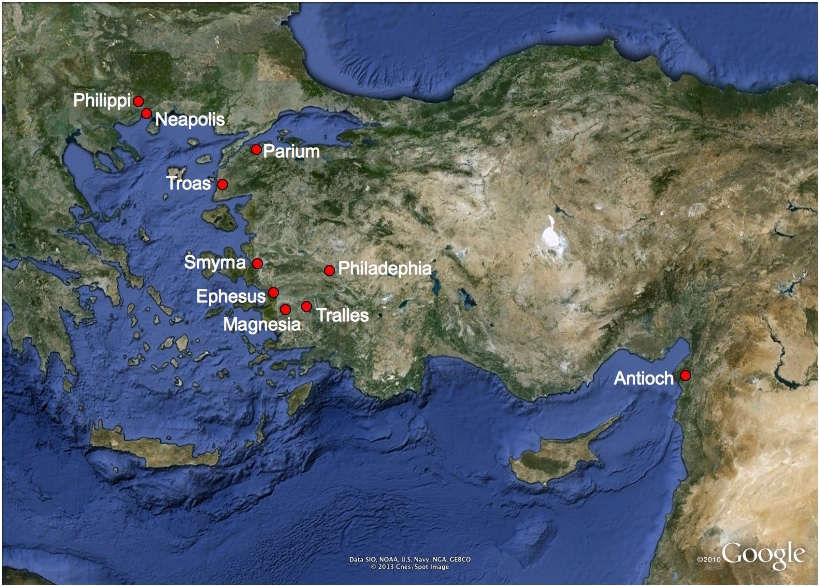 The letter to the Romans

Originally written to the church at Antioch

The Peregrinus hypothesis removes these problems

The Peregrinus hypothesis removes difficulties found in the letters

A phrase seen as relatively insignificant by commentators is shown to occur consistently in a certain context and accordingly adds weight to the hypothesis that the letters were originally written by Peregrinus on his way to Antioch.

The letters to Philadelphia, Smyrna and to Polycarp purport to have been written from the port city of Troas while the prisoner was waiting to board ship. But, as we will see shortly, they were probably written while he was waiting at a different port.

The other letters in the collection—to Ephesus, Magnesia, Tralles and Rome—were written before the prisoner knew the outcome of the in-fighting at Antioch. Because the four letters in this group would have been written at least a few days before the three letters in the other group I will refer to them, for the sake of brevity, as set 1 and will call the others set 2.

The set 1 letters were written in Smyrna during a stop there by the prisoner’s military escorts. The bishops of three of the churches addressed by those letters—Ephesus, Magnesia and Tralles—had traveled, accompanied by a few other members of their flocks, to visit with the prisoner at Smyrna. The letters written to their churches were likely carried back by them when they made their return trips. I see no serious reason to question that these three letters were in fact addressed to the churches they purport to address. I cannot say the same about the other set l letter: Romans.

The Letter to the Romans

The message of the letter to the Romans is loud and clear. It is basically a sustained plea: “Don’t try to get me released, for I want to die for the Name.” END_OF_DOCUMENT_TOKEN_TO_BE_REPLACED