8:2. But I exhort you to do nothing in a spirit of faction—instead, in accordance with the teachings of Christ. For I heard some saying, “If I do not find [in] the archives in the gospel I do not believe.” And when I said to them, “It is written,” they responded, “That is what is in question.”

But my archives are Jesus Christ; the inviolable archives are his cross, his death, his resurrection, and the faith which is through him. It is by these that I desire to be justified, with the help of your prayers.

The gospel has a distinction all its own, namely the appearing of the Savior, our Lord Jesus Christ, his suffering and his resurrection.

[For the beloved prophets announced him, but the Gospel is the completion of imperishability. All these things are good, if you believe with love.]

It seems incredible that Christians would not believe in the gospel if it could not be located in the Old Testament, so scholars have proposed radical alterations to the text. 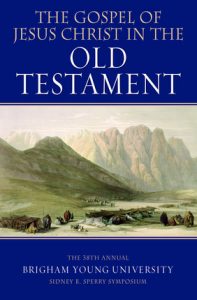 The above passage begins by relating part of an exchange the prisoner had with his Judaizing opponents. There is almost universal agreement that the “archives” in the second sentence refers to the Old Testament. And most scholars are in agreement as to the general sense of the verse: The Judaizers were Christians but insisted that the gospel meet some Old Testament-related requirement of theirs. But beyond that, there has been much debate about the punctuation and precise interpretation of the verse. The biggest problem is that at face value it seems to say that if the Judaizers’ requirement is not met they do not believe in the gospel.

It seems incredible that Christians would not believe in the gospel. So, to avoid such a radical interpretation, a number of alterations have been proposed.

Some have wanted to simply delete the words “in the gospel” as a later gloss. Others, to arrive at the same result by another route, argue that the verse in question contains implied words that are lost in a literal translation. William Schoedel for example, proposes that

“the object (‘it’) should be supplied in the second part of the sentence just as it is in the first. And something like the verb ‘to be’ (or ‘to be found’) can also easily be supplied” (Ignatius of Antioch, pp. 207-8).

In this way the Judaizers are made to reject only those parts of the gospel that are not found in the Old Testament. Michael Goulder, for one, considers that solution “implausible” (“Ignatius’ ‘Docetists’” in Vigiliae Christianae, 53, p. 17, n. 4), but to Schoedel it is definitely preferable to accepting at face value the statement that the Judaizing Christians do not believe in the gospel.