And the whole earth was of one language, and of one speech.

And it came to pass, as they journeyed from the east, that they found a plain in the land of Shinar; and they dwelt there.

And they said one to another, Go to, let us make brick, and burn them thoroughly. And they had brick for stone, and slime had they for morter.

And they said, Go to, let us build us a city and a tower, whose top may reach unto heaven; and let us make us a name, lest we be scattered abroad upon the face of the whole earth.

And the LORD came down to see the city and the tower, which the children of men builded.

And the LORD said, Behold, the people is one, and they have all one language; and this they begin to do: and now nothing will be restrained from them, which they have imagined to do.

Go to, let us go down, and there confound their language, that they may not understand one another’s speech.

So the LORD scattered them abroad from thence upon the face of all the earth: and they left off to build the city.

And so here we are today, speaking our language in our bit of real estate. It all sounds sort of cute, but a book that’s been around for a little while now jolted me by bringing to my attention what quite likely inspired the imagination of the author of this tale.

From Genesis 11 we learn that the god Yhwh . . . is currently spreading the nations over the earth, scattering them from their original base in Babylonia (Shinar). This activity is described as a deliberate divine resettlement policy, provoked by human ambition, because Yhwh is worried about what humans might do if they cooperate with each other.

Then there’s a footnote, which reads (with my own emphasis):

This kind of population resettlement, incidentally, was what the Assyrians did to peoples under their dominion, particularly in response to unacceptable political ambitions on the part of vassals: one of their victims was the kingdom of Israel, and their successors, the Babylonians, did the same to Judah. Yhwh’s actions would therefore perhaps not seem so strange to ancient readers. . . .

And not only the Assyrians and Babylonians. The Persians, too.

We return to the main text to read:

Thus, Yhwh wants to keep the human race reasonably powerless and pacific, to prevent the mischief that can occur when people speak the same language and live in the same city.

The passage is from page 96 of Whose Bible Is It Anyway? by Philip R. Davies.

Of course. I know of no evidence that this story was known before the Hellenistic era — that is, after Alexander’s conquests throughout the Middle East. Was the great city of Babylon a deserted ruin at the time this story was crafted — that is, in the third century? Was the Genesis tale an etiological story, a just-so fiction to explain how the great Babylon came to be in the ruined and desolate state it was at that time? Obviously such a scenario would mean the author was either not familiar with or not convinced about a lot of other narrative that has come to us in our Bibles. But is that necessarily an impediment to exploring hitherto little considered possibilities? Besides, how could the author of Genesis, if also knowing the history to come with Babylonian power over the people of Judah, have told a tale of the ruin of Babylon before it even entered the front door of history? Is it not more likely an etiological tale from the third century has been transplanted into the Genesis narrative? 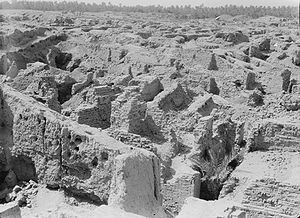