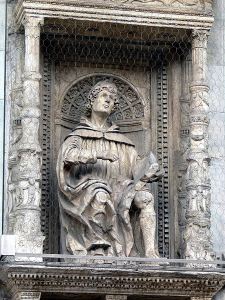 After this considerable amount of prefatory material, Ehrman finally arrives at his discussion of the non-Christian references to Jesus. He begins with Pliny the Younger and his famous letter to Trajan in the year 112 CE during his governorship of the province of Bithynia, making inquiries regarding the prosecution of Christians.

At the outset Ehrman admits that any information about Jesus that might be gleaned from Pliny could be seen as having been derived from the Christians themselves (indeed, this is a virtual certainty from what he says), and thus is of little if any value in establishing the historicity of Jesus. Nor does Pliny use the name “Jesus,” referring to the Christian object of worship simply as “Christ.”

The information Pliny has collected from the accused about the sect’s activities is pretty innocuous:

We might note that the latter does not suggest the Eucharist ceremony with its eating of the flesh and blood of Christ, whether god or man, and there is no reference to a crucifixion let alone an alleged resurrection.

But that pre-dawn chant: Pliny says it was “in honor of Christ as to a god [Christo quasi deo].” END_OF_DOCUMENT_TOKEN_TO_BE_REPLACED