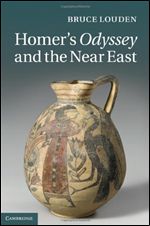 Bruce Louden is Professor in the Languages and Linguistics Department at the University of Texas at El Paso. He has written several works on Homeric literature and I am sharing here a small extract from his latest, Homer’s Odyssey and the Near East. Louden is a classicist, and what he writes here is similar to other recent studies that are beginning to notice how similar the gospels are to other classical and Near Eastern litearture. Many know of Dennis MacDonald’s work comparing Mark’s gospel to the Homeric epics, but there are several others along the same theme, including Thomas L. Thompsons’ The Messiah Myth, and Derek Murphy’s Jesus Potter Harry Christ.

The following extract is singled out because it is an encapsulation of a broad overview of the role of Christ in the context of mythical heroes. The chapter explores much more detail, but some of that can be addressed in other posts. I have linked to Wikipedia articles most of the names from Greek myth for quick reference.

I would analyze the gospels’ overall depiction of Christ (as opposed to the specific sections with which we are here concerned) as a broad synthesis of five traditional types of mythical figures extant in ancient myth: