Well worth reading are Salm’s responses to the ignorance and misrepresentation peddled by McGrath and O’Neill about Salm’s work The Myth of Nazareth.

First he addresses the criticism that he is supposedly arguing there was a hiatus of settlement of a few decades at the time Jesus was supposed to have been there. Salm in fact presents a comprehensive history of the archaeological finds (as published by archaeologists) in the Nazareth region from the Stone, Chalcolithic, Early-Middle-Late Bronze and Iron ages and through to Byzantine times, cites the unequivocal archaeological evidence when settlement ceased in the Nazareth region, and demonstrates the way this evidence came to be subtly re-written by Catholic apologists to give misleading impressions of continual settlement.

(McGrath’s most intellectually incisive response at the end of it all is his usual: I’m not going to accept anything you say because if you disagree with my peers you are just like a creationist.)

So it’s as old as the proverbial time Israel was enslaved in Egypt.

I found this news story about its influence on our language interesting: Ye olde Bible hailed as Shakespeare’s rival.

There’s even a King James Bible Trust site for anyone really really interested. 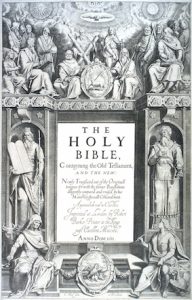