Some have suggested that the nickname was used to refer to the crude Greek style of his Gospel. WikiAnswers speaks of Mark’s Gospel being “written clumsily and ungrammatically, in an unpolished Greek style”.

It is sometimes said that Mark’s Gospel was written for oral presentation, even dramatic performance, and that this explains certain features of the Gospel’s style. Maybe, but Greek tragedies were written for oral presentation, too, and their language is polished; Seneca also wrote tragedies that were meant to be read aloud and used some of the most bombastic and flowery language imaginable just for this purpose.

So oral performance alone cannot be the explanation for the oddities of his Greek.

Dennis MacDonald suggests that Mark was writing an “anti-epic”, and deliberately cultivated an “anti-polished/poetic” style of “natural speech” to match his anti-epic theme.

(It might seem odd to some to speak of “deliberately cultivating” a “natural speech style”. But it is not easy to express the way we really talk in writing. For most of us it takes effort. Pick up the pen, sorry, sit at the keyboard to write just what we’ve been talking about and bang, for a few moments at least writer’s block as likely as not hits. And the words we type rarely come out just the way we would say them.)

Gilbert Bilezikian has argued that many of the unusual features of Mark’s style can be explained as a mix of the spoken language of everyday life and literary devices characteristic of dramatic performances (The Liberated Gospel: a Comparison of the Gospel of Mark and Greek Tragedy). This post looks at Bilezikian’s explanations for a wide range of the unusual features of Mark’s style. (Where technical terms such as “aorist tense” are used I link to off-site explanatory notes; I also link to the Bible Study Tools Lexicon to enable comparison of frequency of use of certain words across the Gospels.)

I also refer to additional insights by Paul Nadim Tarazi.

I begin immediately with two of my favourite Markan so-called infelicities of style:

I can imagine some of today’s professors rebuking Mark for repeating certain words too frequently. “Use a thesaurus!” they would demand. “Find alternatives. Variety is the spice of writing.” I can also imagine Mark shrugging them off impatiently and muttering under his breath: “Idiots. I’m trying to make a point here. If they can’t see what it is I’ll quit this class.”

Bilezekian says that the auxiliary verb  “hrxato”, began is found 26 times in Mark, 6 times in Matthew, twice in Luke.

The word “euthus”, immediately, is found 41 times in Mark, 8 times in Matthew, 3 times in Luke.

The obvious effect is to convey a sense of fast-moving immediacy.

But I am sure there is more involved. Does not the repetition of both these words keep the audience focused on the opening pronouncement in the Gospel?

The beginning of the Gospel of Jesus Christ . . . The voice of one crying in the wilderness, Prepare ye the way of the Lord, make his paths straight (euthus) . . . . 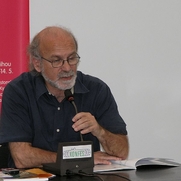 This is the view of Paul Nadim Tarazi in Paul and Mark:

The relative importance of the passage from Isaiah becomes even clearer when one realizes that a text with the word eutheias (straight) was the perfect choice for Mark due to his remarkably frequent of other forms of the same word, especially the adverb euthys (straightaway/immediately). The latter appears no less than 42 times in this short book, compared to only 12 times throughout the rest of the New Testament — so often that English translations ignore many of these 42 instances because it is so repetitive and would not sound natural in English. But the word should not be written off so lightly, as if Mark sprinkled his carefully planned gospel text with accidental and superfluous extras. In fact, the connection between the adverb euthys and the adjective eutheias found in 1:3 will have been unmistakable for Mark’s hearers. The two words sound alike and are closely related in meaning. Given the fact that the other form of the same adverb, eutheos, occurs 34 times in the New Testament but never in Mark, one may conclude that the choice of euthys was deliberately made because its link with eutheias of Isaiah would be more apparent. Each of the 42 times Mark uses this word he is effectively pointing out how this prophecy of Isaiah’s is fulfilled. (p. 135)

We can conclude that Mark’s repetition of “immediately” or “straightaway” or “following straight on” was also intended to convey that the details of the narrative were themselves showing how the “way” was being made “straight” for the life of the Christian.

Recently we were discussing the allusion to “making a path” in the story of the disciples plucking corn on the sabbath. The same story also uses “began”:

and his disciples began to make a way, plucking the ears (Mark 2:23)

This would lead us to conclude that what Mark meant by “the beginning of the Gospel” was not simply the opening words, but that his written narrative itself was the “beginning” of a “Gospel” that referred to something more than the written text alone.

Frequent use of the historic present

The effect of the frequent use of the present tense is to create “the impression of vividness and directness”.

Matthew’s Gospel, much longer than Mark, uses it 78 times.

Even when Mark gave the speaker’s words in indirect narration Mark used the present tense or the perfect:

And again he entered into Capernaum, after [some] days, and it was heard that he is in the house (Mark 2:1)

Pilate was surprised to hear that he was already dead. Summoning the centurion, he asked him if Jesus had already died. (Mark 15:44)

and Mary the Magdalene, and Mary of Joses, were beholding where he is laid. (Mark 15:47)

And having looked, they see that the stone hath been rolled away — for it was very great (Mark 16:4)

Other times, in the past tense Mark used the imperfect rather than the aorist. He thus brought the events somewhat closer to the reader in a descriptive tense. (p. 113)

Teachings of Jesus and debates involving Jesus are expressed in direct speech “as though written to be repeated by an actor in the same circumstances.” (p. 113)

The Gospel’s dialogues follow the stichomythic form found in Greek tragedy. Examples include Jesus’ conversations with

And cried with a loud voice, and said, What have I to do with thee, Jesus, thou Son of the most high God? I adjure thee by God, that thou torment me not.

For he said unto him, Come out of the man, thou unclean spirit.

And he asked him, What is thy name?

And he answered, saying, My name is Legion: for we are many.

But Jesus said unto her, Let the children first be filled: for it is not meet to take the children’s bread, and to cast it unto the dogs.

And she answered and said unto him, Yes, Lord: yet the dogs under the table eat of the children’s crumbs.

And he said unto her, For this saying go thy way; the devil is gone out of thy daughter.

father of the epileptic boy

And he asked his father, How long is it ago since this came unto him?

And he said, Of a child. And ofttimes it hath cast him into the fire, and into the waters, to destroy him: but if thou canst do any thing, have compassion on us, and help us.

Jesus said unto him, If thou canst believe, all things are possible to him that believeth.

And straightway the father of the child cried out, and said with tears, Lord, I believe; help thou mine unbelief.

And when he was gone forth into the way, there came one running, and kneeled to him, and asked him, Good Master, what shall I do that I may inherit eternal life?

And Jesus said unto him, Why callest thou me good? there is none good but one, that is, God.

Thou knowest the commandments, Do not commit adultery, Do not kill, Do not steal, Do not bear false witness, Defraud not, Honour thy father and mother.

And he answered and said unto him, Master, all these have I observed from my youth.

Then Jesus beholding him loved him, and said unto him, One thing thou lackest: go thy way, sell whatsoever thou hast, and give to the poor, and thou shalt have treasure in heaven: and come, take up the cross, and follow me.

And Jesus said unto him, Go thy way; thy faith hath made thee whole.

ELECTRA And where is that unhappy one’s tomb?

ORESTES There is none; the living have no tomb.

ELECTRA What sayest thou, boy?

ORESTES Nothing that is not true.

ELECTRA The man is alive?

ORESTES If there be life in me.

ELECTRA What? Art thou he?

ORESTES Look at this signet, once our father’s, and judge if I speak truth.

ELECTRA Is this thy voice?

ORESTES Let no other voice reply.

ELECTRA Do I hold thee in my arms?

ORESTES As mayest thou hold me always!

And they answered, John the Baptist: but some say, Elias; and others, One of the prophets.

And he saith unto them, But whom say ye that I am?

And Peter answereth and saith unto him, Thou art the Christ.

And he charged them that they should tell no man of him.

Mary E. Lyman remarked that Mark used direct discourse in instances where it is “merely a way of bringing a scene more clearly or more impressively before us.” Such are some of the commands uttered by Jesus, which sharply intensify dramatic situations:

Be silent, and come out of him

I will; be clean

I say to you, rise, take up your pallet and go home

Little girl, I say to you, arise

For an even more realistic effect the phrase is sometimes pronounced in Aramaic, but its translation always follows, being an element of the narrative so as not to attract attention:

Mark’s use of Aramaic expressions and occasional Latin terms also has antecedents in Greek tragedy. Aristotle stated that “a certain admixture of unfamiliar terms is necessary. These, the strange word, the metaphor, the ornamental equivalent, etc. . . . will save the language from seeming mean and prosaic.” (p. 114)