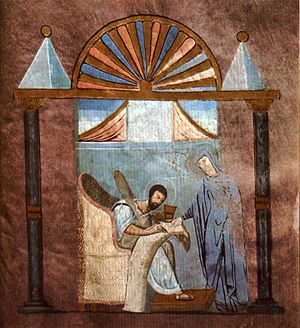 Some have suggested that the nickname was used to refer to the crude Greek style of his Gospel. WikiAnswers speaks of Mark’s Gospel being “written clumsily and ungrammatically, in an unpolished Greek style”.

It is sometimes said that Mark’s Gospel was written for oral presentation, even dramatic performance, and that this explains certain features of the Gospel’s style. Maybe, but Greek tragedies were written for oral presentation, too, and their language is polished; Seneca also wrote tragedies that were meant to be read aloud and used some of the most bombastic and flowery language imaginable just for this purpose.

So oral performance alone cannot be the explanation for the oddities of his Greek.

Dennis MacDonald suggests that Mark was writing an “anti-epic”, and deliberately cultivated an “anti-polished/poetic” style of “natural speech” to match his anti-epic theme.

(It might seem odd to some to speak of “deliberately cultivating” a “natural speech style”. But it is not easy to express the way we really talk in writing. For most of us it takes effort. Pick up the pen, sorry, sit at the keyboard to write just what we’ve been talking about and bang, for a few moments at least writer’s block as likely as not hits. And the words we type rarely come out just the way we would say them.)

Gilbert Bilezikian has argued that many of the unusual features of Mark’s style can be explained as a mix of the spoken language of everyday life and literary devices characteristic of dramatic performances (The Liberated Gospel: a Comparison of the Gospel of Mark and Greek Tragedy). This post looks at Bilezikian’s explanations for a wide range of the unusual features of Mark’s style. (Where technical terms such as “aorist tense” are used I link to off-site explanatory notes; I also link to the Bible Study Tools Lexicon to enable comparison of frequency of use of certain words across the Gospels.)

I also refer to additional insights by Paul Nadim Tarazi.

I begin immediately with two of my favourite Markan so-called infelicities of style: