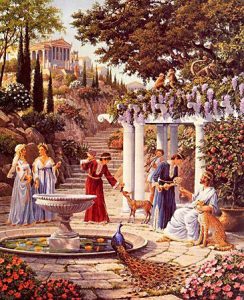 Okay, I’m sure there will be a few differences if I stop to think seriously about it, but I have just read the introduction in Benjamin Jowett’s Critias by Plato in which are cited the reasons Plato’s lies have managed to convince so many people of the historical truth of the myth of Atlantis. And hoo boy, how can anyone fail to notice certain echoes of the arguments used — even by professional scholars! — to argue for the historicity, and even the contemporary sophistication, of the gospels?

No one knew better than Plato how to invent ‘a noble lie’.

I skip here the earlier discussion found in the companion treatise, Timaeus, in which Plato’s character Socrates explains the necessity for a myth or lie such as that of Atlantis. So here are the ten reasons Jowett cites for why so many generations have fallen into the trap of thinking the tale of Atlantis was based on something historical. I add a few remarks to draw attention here and there to their similarity to arguments even biblical scholars (not only fundamentalist lay people) have advanced to justify acceptance of the Gospels themselves as reflecting some genuine historical reality.

(1) the innocent declaration of Socrates that the truth of the story is a great advantage;

How often does one happen to encounter the phrase even from scholars that the gospel narratives have the “ring of truth” about them!

Even the most unnatural of all the gospels, that of John, is said by some that its claims to have originated with an eyewitness entitles it to be taken as serious history.

(2) the manner in which traditional names and indications of geography are intermingled (“Why, here be truths!”);

This is a most common claim among believers in “gospel-truth”. Why, it speaks of Pilate, and Jerusalem, and the Temple, and real towns around the Galilee lake, and of Pharisees, and Sadducees, and Tiberius and Augustus, and sudden storms on the Galilee waters . . . .

(3) the extreme minuteness with which the numbers are given, as in the Old Epic poetry;

Or is this the most common appeal to gospel-truth? Why else would Mark happen to speak of the grass on which crowds sat as being attributed with the colour “green”, unless this were from a veritable eyewitness!

Details, details. Surely no fiction author has ever been able to invent details out of his imagination alone!?

(4) the ingenious reason assigned for the Greek names occurring in the Egyptian tale;

Ah yes, Plato had his narrator Critias demonstrate his astuteness in realizing that his veracity of his tale could founder over his facile introduction of Greek names — given that he had said the tale originated with Egyptians. No problem. Just slip in a notice that the original Greek to have learned the tale, Solon, took the pains to ask his Egyptian narrators to give him the meanings of the names so that he could reproduce them in Greek!

Is there a counterpart here to those who find a certain genuineness behind the gospel tales on the grounds that they confess that certain speech they express in Greek was, in fact, a translation of specific Aramaic phrases? So when Jesus told the girl to rise, or when he called out to God from the cross — we are allowed the Aramaic original that lay behind the Greek text. A nice touch of authenticity!

(5) the remark that the armed statue of Athena indicated the common warrior life of men and women;

It is always helpful for purposes of verisimilitude if the author has his narrator indicate to readers some explanation of the customs to which he refers in his narrative. You know, like finding a reason to explain that when Jesus’ disciples were faulted for not washing their hands before a meal, this was because of certain specifically Jewish customs of which there were a great number.

(6) the particularity with which the third deluge before that of Deucalion is affirmed to have been the great destruction;

It is always good for the impression of veracity that the characters are able to refer to specific facts in past history, or even just to introduce new details as if they were real facts. So when Jesus can speak of the chance news event of the Tower of Siloam killing a number of people, or of having seen Satan fall, then we have another form of colourful detail which many find so persuasive.

(7) the happy guess that great geological changes have been effected by water;

Does one not think here of the ‘happy guess’ that not a few scholars attribute to Jesus for his supposed ability to predict the fall of Jerusalem?

(8) the indulgence of the prejudice against sailing beyond the Columns, and the popular belief of the shallowness of the ocean in that part;

And there are still people, even some quite highly educated people, who believe that the gospel assumptions that certain diseases, particularly mental illnesses, are caused by demonic influence.

More commonly, anti-semitism has helped build a popular tradition of belief that the gospel portrait of the mean-spiritedness of the Pharisees is historical, and to which Jesus stood in opposition.

(9) the confession that the depth of the ditch in the Island of Atlantis was not to be believed, and ‘yet he could only repeat what he had heard’, compared with the statement made in an earlier passage that Poseidon, being a God, found no difficulty in contriving the water-supply of the centre island;

Is not this the position of so many who profess the truth of the Gospels? If a miracle is beyond credibility, what else can be the explanation? Dare we be accused of anti-supernaturalistic bias? Why the uncharitable “hermeneutic of suspicion” in response to tales of the miraculous? Do not the gospels simply state the bare facts, without ornament, as if they can appeal to nothing but the truth of eyewitness reports? Such disingenuousness is the most accomplished attribute of the con-man, the artificer of tall tales.

(10) the mention of the old rivalry of Poseidon and Athene, and the creation of the first inhabitants out of the soil. Plato here, as elsewhere, ingeniously gives the impression that he is telling the truth which mythology has corrupted.

So, too, when Jesus alludes to Adam and Eve, he does so within the framework of teaching a lesson of contemporary relevance about the state of marriage. Or when he speaks of Noah it is to teach a spiritual lesson of spiritual alertness. Such contexts enable more sophisticated readers to interpret Jesus as being a notch more enlightened than those who fail to see beyond the literalness of old mythical tales.

The whole point of the Atlantis myth was to offer an imaginative model for how virtues can work to produce the ideal state, and how an ideal state risks the consequence of hubris. One might call it a parable, or a moral tale. The lessons it teaches were no doubt once applied as explanations for the historical rise of the greatness of Athens, and its eventual demise. The tale even explained the primordial racial and “spiritual” origins of the people of Attica and Athens.

The tale professed the certainty of reliable tradition. It came via Egyptian priests and one of the most renowned and reputable of Athenian statesmen, Solon. Even certain written details were said to be in the possession of the grandfather of the literary narrator, Critias. Luke’s proclaimed sources in his prologue are anonymous and vague by comparison.

If one is a “noble lie”, on what grounds do we exclude the other?

In other words, what is the real bottom-line foundation for the argument for the historicity of the gospels?