Recently on Vridar, Neil posted about the untimely passing of Hermann Detering. A person commented with a link to his own blog, in which he called Detering a crank, and described Vridar as a blog that is “run by a fraternity who hope that Jesus never existed.” While I am a huge fan of unintended irony, we had to block the fellow for being a boor.

In his post, he defended the use of paleography (or as citizens of the Commonwealth spell it, palaeography) as a means for dating ancient documents. Detering, he insisted, didn’t know what he was talking about.

We can’t deny that when all else fails, paleography is sometimes the only way to guess at a date range for a given manuscript or fragment thereof. Unfortunately, it is the worst of all methods available to us. Here are some reasons why: END_OF_DOCUMENT_TOKEN_TO_BE_REPLACED

What does it mean to say that a written work from ancient times is “well attested”? If you browse Christian apologetic web sites, you’ll read that the manuscript evidence for the New Testament is superior to anything else from antiquity. The Christian Apologetics & Research Ministry (CARM) site, for example, tells us that our “New Testament documents are better preserved and more numerous than any other ancient writings.”

This argument, of course, is not new. F. F. Bruce often argued that we hold the NT to an unreasonably higher standard than any other ancient document or set of documents. He lamented that people tend to dwell on the mistakes and discrepancies in the manuscripts. Back in 1963 he wrote:

In view of the inevitable accumulation of such errors over the many centuries, it may be thought that the original texts of the New Testament documents have been corrupted beyond restoration. Some writers, indeed, insist on the likelihood of this to such a degree that one sometimes suspects they would be glad if it were true. But they are mistaken. There is no body of ancient literature in the world which enjoys such a wealth of good textual attestation as the New Testament. (F. F. Bruce, 1963, p. 178, emphasis mine)

As you can see, apologetic victimhood is nothing new.

Ever so much greater

In a more recent work he said that the NT gets unfair treatment. He complained:

In the foreword to the same book, N. T. Wright gushed: END_OF_DOCUMENT_TOKEN_TO_BE_REPLACED

Stepping outside of the Orsini-Clarysse article for a moment, here are three online reviews of Bagnall’s book: END_OF_DOCUMENT_TOKEN_TO_BE_REPLACED 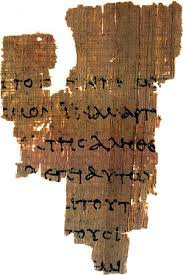