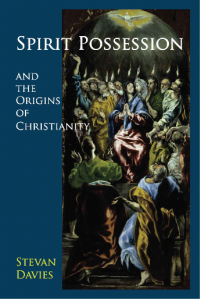 Professor Stevan Davies has re-published his book Jesus the Healer under a new and probably more appropriate title, Spirit Possession and the Origins of Christianity, a new introduction on the pentecostal origins of the Christian movement (including an account for comparative purposes of the origins of modern pentecostalism since 1906) and added a couple of chapters on the possible evidence that Christianity emerged out of a form of Judaism we find expressed in the Odes of Solomon. Although some scholars have seen these poems as having been influenced by Christianity Davies argues for the traditional view that they are pre-Christian. And if pre-Christian, they are evidence of beliefs held by certain Jews that eventually had a profound influence on Christianity.

Scholars today (Charlesworth, Lattke) have dated the Odes to around 125 CE, at “the overlap of early Judaism, early Gnosticism and early Christianity.” Davies argues with others (e.g. Jack Sanders) that they influenced Christianity rather than the reverse and that they date from the period 50 – 25 BCE.

Western Syria (which includes the region of Galilee) is the most likely place of their origin.

It should be, but often is not, obvious that there were cultural influences on Galilee, and Samaria, and even Judea that come from the north, from Syria, Tyre, Sidon, Damascus, Antioch, influences on Judaism that were not Judean in origin. (p. 260)

While the Odes speak of a Christ figure they convey no hint of any awareness of a Jesus. If we define them as “Christian” they are of a quite different type of Christianity we read about in the New Testament.

Their Christ figure is a human who becomes Christ and who has no particular historical identity.

The Odes share vocabulary and phrases that appear in early Christian documents but the ideas conveyed by these shared expressions are quite unlike anything we associate with Christianity.

They do not mention

The word “cross” supposedly appears twice in the Odes of Solomon (Odes 27 and 42), but only when translators such as Charlesworth take the Syriac (qaysa) or Greek (xylon), the word for tree or wood and translate it as “cross.” Less tendentious translators do not do this. . . .

Davies suggests that those passages should probably be translated to convey the image of a suppliant stretching his arms upward in prayer like tree branches. They do not depict arms stretched out as if on a cross.

The Odes do remind us of the Gospels with their references to:

But notice how unlike the ideas found in the Gospels these expressions are: END_OF_DOCUMENT_TOKEN_TO_BE_REPLACED

Continuing the series that is archived here.

Here is my understanding of Walter Schmithals’ argument so far. (Others who have read ‘Gnosticism in Corinth‘ — Roger? — please do chime in with corrections. I have not found reading S easy and am quite open to being shown that I have forgotten or overlooked some significant aspect of his argument.)

Schmithals guiding principle appears to be that nature (or human culture) would produce a singular trajectory or evolutionary progression from a “system” which begins without a clear individualised redeemer myth (i.e. one in which a personalised redeemer descends from heaven to rescue mankind enabling them to follow him back into heaven and their true home). At the beginning the potentially saving power lies dormant in all humankind and is activated by saving knowledge (gnosis) of its origin and ultimate home. This power was part of the great power or creative force that produced all things.

Jewish influence or Jewish gnostics are said to have led to the adoption of the title of “Christ” as one of the names of this power. This adoption took only the title or term Christ and not the full conceptual embodiment of what that figure supposedly meant to Jewish thought. In this primitive gnostic thought the title Christ was thus amenable to being attached to the Primal Man or Adamus (heavenly Adam) concept.

None of the above is said to have shown any hint of Christian influence. END_OF_DOCUMENT_TOKEN_TO_BE_REPLACED

One who identifies himself as an Irish Anglican here has asked me if I would like to address the arguments of John A. T. Robinson in Redating the New Testament. While I have had such an exercise on my list of “to-do” items for some time, it is unlikely that I will get around to doing anything in depth for quite some time. I would have thought, from the fact that Robinson’s arguments for early dates seem to have made little significant impact on mainstream scholarship, we can see the arguments have not been overwhelmingly persuasive — apart from the more apologetically inclined who have a theological interest in seeing the gospels dated as early as possible to the events they narrate. (But not being a part of academia I might be misinformed on this point.)

As if the narrative is itself some external historical reality and not, indeed, just a lot of creative words making up the theological parable or story. Sound historical method, at least as found practiced outside the sheltered ranks of historical Jesus studies, and as well recognized by the likes of Albert Schweitzer himself, requires that there be some indisputable reference point or control that is external to the narrative itself before one can rightfully assume any narrative has some historical basis. But Schweitzer lost that battle and it appears that today many mainstream believers in the historical Jesus can only respond with insult in place of reasoned argument when challenged with this basic premise. That’s understandable. There is no reasoned rebuttal available to them.

Well, let’s see. I’m digressing. Back to dating the gospels.

There is one simple reason John A. T. Robinson’s dating arguments fail. There are a number of more detailed reasons. But one overall methodological reason undermines his entire effort. END_OF_DOCUMENT_TOKEN_TO_BE_REPLACED