In the first part of this post, we examined some instances of New Testament scholars employing historical criteria before the advent of Formgeschichte, demonstrating that these criteria and methods did not differ significantly from what we would later call criteria of authenticity. In this post, we’ll look more closely at the ways source critics argued for the “genuineness” of passages, insisting that some terms, concepts, and sayings in the NT “must have” come from the historical Jesus himself.

Historical Jesus studies, like many historical endeavors, has several “big questions.” For example, Did Jesus think he was the messiah? Even the painfully pious Anglo-American scholars of the early twentieth century, who took as much as possible in the NT to be true, asked such questions. Granted, in most cases German (or perhaps Dutch or French) scholars spurred them to write what were essentially apologetic rebuttals; nevertheless, they dared to ask the questions.

Regarding the question: Did Jesus use the term “Son of Man”? Julius Wellhausen in Das Evangelium Marci, had said, “Er ist gleichzeitig mit der Erwartung der Parusie Jesu entstanden.” (It emerged simultaneously with the expectation of the parousia of Jesus.) In other words, only later in the church did the belief arise that Jesus must have foreseen his suffering and death, and that he predicted his return when he will “appear in the clouds of heaven.” (Wellhausen 1903, pp. 65-69)

Wellhausen, for example, argues . . . [The Church] put into His mouth the words, “The Man of whom Daniel spoke will appear in the clouds of the heaven.” This was soon interpreted as equivalent to “I will return.” The next stage was to make the Son of Man the subject in the prophecies of death and resurrection where it becomes necessarily a designation of Christ Himself. Finally, the phrase was introduced into non-eschatological sayings, where it becomes equivalent simply to “I.”

Now Wellhausen is a brilliant philologist, but he is often a very bad interpreter, and his exposition of the development of this phrase in the Church is contrary to all the evidence. (Allen 1911, p. 309)

In a footnote, Allen said he was happy to discover Adolf von Harnack believed the phrase was genuine and that its use by Jesus himself was a secure fact. We may note here that, despite what some Memory Mavens suggest, discussions about which traditions were authentic and which were apocryphal or secondary did not start with the form critics.

How should we evaluate the evidence in the New Testament to determine whether Jesus used the term Son of Man? And if we decide that he did, how do we know what he meant by it? Simply by asking these questions, we have admitted that what Jesus actually said and what the gospels have recorded might not be the same.

What we’re looking for, then, is the truth behind the text. END_OF_DOCUMENT_TOKEN_TO_BE_REPLACED

The most solid argument I have read about what the word in Luke 1:2 translated as “eyewitnesses” actually means is by John N. Collins: see the post What Did Luke’s Eyewitnesses See? Collins presents a cogent argument that the word really means officials who have the responsibility for the writings/library of the community: it is their job to assess and preserve the authenticity of the documents entrusted to them — they are “specially authorized guarantors of the traditions.”

But in this post I am backtracking and working from the assumption that the word does convey the idea of one who sees firsthand some event. What I am saying here is this: What if the word really did express the idea of a witness? What does such a witness mean for Luke?

Norman Perrin answered this question nearly forty years ago in Rediscovering the Teaching of Jesus.

Firstly, Perrin begins by reminding modern readers that they must leave behind their modern conceptions and make an effort to enter the world of the biblical authors. Get out of your heads any modern notion of what the word “eyewitness” means to us today who are familiar with the concept from our newspaper reports and court proceedings:

If we resolutely ban from our minds . . . what a modern writer would mean by an ‘eyewitness’ and ask ourselves what Luke meant by the expression . . . . (p. 27) 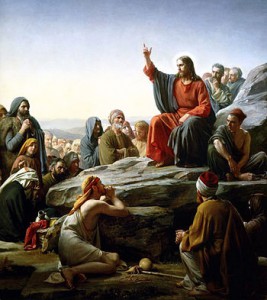