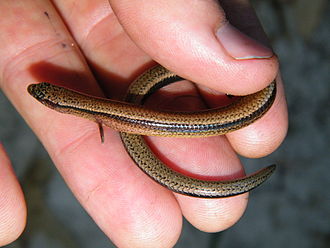 Three-toed Skink Is an Evolutionary Intermediate

Which came first the lizard or the egg? – The University of Sydney

Today from the the reptile world, we have a very nice example of evolution in progress, or at least in a state of dynamic equilibrium between two characteristics, each of which could be advantageous in different circumstances.

This example is an Australian skink which appears to be so finely balanced between egg-laying (oviparous) and live-young bearing (viviparous), that one individual has been observed doing both in the same pregnancy. Several weeks after laying a batch of three eggs, an individual three-toed skink, Saiphos equalis, was seen to give birth to a live young. . . .

From Julia Bainbridge on Salon.com

Life after fundamentalist Christianity: One former believer’s struggle to find clarity and himself

. . . . “Even though I still had my small bubble around me, we were what Christian artists would call playing crossover venues,” he told “The Lonely Hour.” “We were out there playing bars and meeting people all over the country that my parents warned me about or that the church cursed. I’m becoming friends with them and I’m having these beautiful, wonderful experiences with them. So I started to question my religion: Is this what they were worried about? Like, just normal people? That definitely started to challenge my long-held beliefs even further.” . . . .

Reading James’ story made me wish I had never given up music lessons so I, too, could have been in a band and learned lessons far sooner than I did. There’s also a link to the audio interview with James.

“We can’t be certain how the Arabs became Muslim”, says researcher Tom Holland. Fascinating! Was Mohammad (“the Praised One”) originally Jesus? Was Islam originally a non-trinitarian Christian sect that rejected the need for an atonement on the cross? The evidence from coins don’t lie. People do. This is extremely interesting and new to me. Makes sense. The first video is by the Atheistic Republic, who got me thinking. The others back it up.

Loftus refers to Tom Holland’s exploration of the question of Muhammad’s historicity, something I have done here, too — See

Rene Salm is continuing to augment a database of Hermann Detering’s legacy:

This is the first of several posts that will review Dr. Detering’s life and scholarship according to the available material on- and offline. It is carried out from afar and in an admittedly impromptu manner. I invite readers to add data, links, or corrections—simply send me an email with the information and I will consider adding it to the CV. The Wikipedia article (German here) is a good place to begin, and Detering’s own brief VITA in German is on his website here.

These posts are deceptively short. However, they are dense with links that offer the interested reader avenues to explore a good deal of material.

If possible, I would like to add a personal impression of Dr. Detering’s character, work, and family life. Any reader who knew Hermann personally, and for some length of time, is invited to email me his/her impressions which I will review and certainly consider uploading.

Oh no, from Salon.com, some frightening news!

Won’t Trump see their support as enough reason to change his mind and go back into Syria in force?!! Why can’t they just stay quiet and make him think they oppose him on everything?

I used to say I did not see myself as a Jesus mythicist. That was because I thought the idea of Jesus’ existence or nonexistence was less important than being able to explain the evidence we have for the origins of Christianity — wherever that explanation might lead. The interest, surely, is in understanding how Christianity happened. (Many Christians may want to investigate a “historical Jesus” but that sounds to me more like a faith interest, not a historical one.)

R. Joseph Hoffmann describes himself as a Jesus agnostic because he has concluded that “the sources we possess do not establish the conditions for a verdict on the historicity of Jesus”.

That sounds reasonable to me.

(The essay by Hoffmann, and my reply to it and Hoffmann’s rejoinder, that prompted this post, can be found at Did Jesus Exist? Yes and No on Hoffmann’s New Oxonian blog.)

We have primary evidence to corroborate the existence of people such as  Julius Caesar, Alexander the Great and George Washington.

So thus far, given that “the sources we possess do not establish the conditions for a verdict on the historicity of Jesus”,  Jesus agnosticism is the only logical way to go.

So if someone like Doherty attempts to explain the origin of Christianity without a historical Jesus, and even sees the Jesus of that religion emerging over time as a mythical construct, as a Jesus agnostic I might express some interest in examining his thesis.

If the evidence is suggestive enough, I might even find myself leaning from agnosticism on Jesus towards the view that Jesus was always from the beginning a mythical construct, and not a historical person who was eventually buried beneath the later mythical overlays.