Skip to content
These are the two olive trees and the two candlesticks, standing before the Lord of the earth. (Rev 11:4)

The above identification of the two witnesses draws upon the imagery in Zechariah 4: 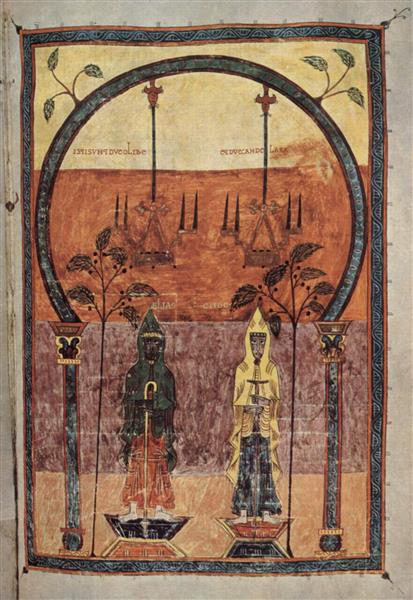 1 And the angel who talked with me came again and waked me, as a man who is wakened out of his sleep,

2 and said unto me, “What seest thou?” And I said, “I have looked and behold, a candlestick all of gold with a bowl upon the top of it, and his seven lamps thereon, and seven pipes to the seven lamps which are upon the top thereof;

3 and two olive trees by it, one upon the right side of the bowl, and the other upon the left side thereof.”

4 So I answered and spoke to the angel who talked with me, saying, “What are these, my lord?”

5 Then the angel who talked with me answered and said unto me, “Knowest thou not what these be?” And I said, “No, my lord.”

6 Then he answered and spoke unto me, saying, “This is the word of the Lord unto Zerubbabel, saying, ‘Not by might nor by power, but by My Spirit,’ saith the Lord of hosts.

7 Who art thou, O great mountain? Before Zerubbabel thou shalt become a plain; and he shall bring forth the headstone thereof with shoutings, crying, ‘Grace, grace unto it!’”

8 Moreover the word of the Lord came unto me, saying,

9 “The hands of Zerubbabel have laid the foundation of this house; his hands shall also finish it. And thou shalt know that the Lord of hosts hath sent me unto you.

10 For who hath despised the day of small things? For they shall rejoice and shall see the plummet in the hand of Zerubbabel with those seven. They are the eyes of the Lord, which run to and fro through the whole earth.”

11 Then answered I and said unto him, “What are these two olive trees upon the right side of the candlestick and upon the left side thereof?”

12 And I answered again and said unto him, “What be these two olive branches, which through the two golden pipes empty the golden oil out of themselves?”

14 Then said he, “These are the two anointed ones, who stand by the Lord of the whole earth.”

The two anointed ones in Zechariah are the political leader, Zerubbabel, and the high priest, Joshua.

Thomas Witulski addresses the various interpretations of the two olive trees and two candlesticks in Revelation that are found in the commentaries and concludes that the author meant to depict two historical persons (as opposed, for example, to representatives of Christianity), but that he also did not want them to be understood as spiritual heirs of Zerubbabel and Joshua.

“Witnesses” is possibly a misleading translation in the context of Revelation 11. It suggests persons who offer a testimony, or carry a message. But the one thing lacking in Rev 11 is any indication of a message proclaimed by these two μάρτυσίν. A better translation might be “martyrs”.

Of particular significance is that Revelation notably avoids using the title of “anointed ones” that is assigned to Zerubbabel and Joshua. Even though in Revelation we read a partial quotation of Zechariah 4:14, we see that the two μάρτυσίν are not allowed a title of special anointing. For Christians, after all, there was only one anointed one, Jesus Christ. The two μάρτυσίν have no such spiritual title. Further, from what we know of early Christianity, it is unlikely that outstanding status would have been given to any members since in a sense all Christians were “priests and kings”, and there were many prophets among them.

Nor does the apocalyptist of Revelation link the two μάρτυσίν with plans to rebuild the temple in Jerusalem. One might have expected such an association given that Revelation 11 begins with a commission to measure a temple and Zechariah has a strong focus on the role of Zerubbabel and Joshua in the building of the second temple.

So why does Revelation cast the two μάρτυσίν as two olive trees and two candlesticks if they are not “anointed ones” and are not engaged in a rebuilding of the temple — and, as we saw in the previous post (part A), are apparently commissioned by a heavenly being of a lesser status than the one commissioning the author John? Witulski’s view is that the author of Revelation was working very freely with a prophetic tradition based on Zechariah where the two leaders of Israel, the political and priestly heads, were represented by two candlesticks and two olive trees.

The powers attributed to the two μάρτυσίν bring to mind the miracles of Moses and Elijah. However, both of the μάρτυσίν are said to wield these powers so it is unlikely that they are meant to represent the two OT heroes. Elsewhere in both the OT and Jewish writings some of these powers are described quite independently of associations with Moses and Elijah (e.g. 1 Kings 8:35; 1 Sam 4:8).

Revelation enjoins Christians to refrain from violence and retaliation.

The two μάρτυσίν are not part of this group, clearly, since they are said to fight violence with violence. The beast wages war against them and they retaliate with deadly powers. If the beast represents Rome then Revelation 11 would appear to be describing a violent conflict between two leaders of Israel and the imperial power. If the two μάρτυσίν are prophets, they are not prophets in the classical Christian sense since they are not said to have any particular prophetic message. It is not their words that torment those who would harm them (Rev 11:10) but their powers to hurt and kill.

The fire said to come from their mouth is sometimes interpreted as symbolic of the power of their words, but by now we know that W will stress that “their words” are missing from Revelation 11. Further, there are no cues in the description that the fire is a metaphor here.

Revelation speaks of Christian martyrs. Christians are those who submit without complaint to their fate against hostile political powers. It follows that the two μάρτυσίν cannot be part of the Christian community. Yet they are described in the same imagery as the prophetic tradition used for the political and religious leaders of Israel. They are at war against Rome. So there is no prize for guessing where Witulski is leading us by now. After further discussion of various terms and phrases in the text and wider context of Revelation, W writes,

. . . we end up with an overall picture that is quite coherent and that will certainly be immediately apparent to the first recipients of the Apk: The two μάρτυρες [witnesses] are the two leading representatives of the people of Israel and the Palestinian Jews respectively who, in the context of a military conflict with the imperium Romanum, act as witnesses to the end of the existing political, social and societal conditions of the present, which emphasise the aeternitas of Rome, and the establishment of its new divine kingship. The θηρίον άναβαΐνον έκ τής άβύσσου [beast rising out of the abyss], however, proves to be (still) stronger; it is able to overcome and kill the two μάρτυρες proclaiming this testimony, whose effectiveness had been limited from the outset, at least in the eyes of the apocalyptist. (W, 89f – translation)

Where [their?] Lord was crucified?

And their dead bodies shall lie in the street of the great city, which spiritually is called Sodom and Egypt, where also our Lord was crucified. (Rev 11:8 – KJ21)

W does not find the arguments against the authenticity of that last clause of Revelation 11:8 indisputable. But if it is original then does it not suggest that the two μάρτυσίν were meant to be understood as part of the Christian community? 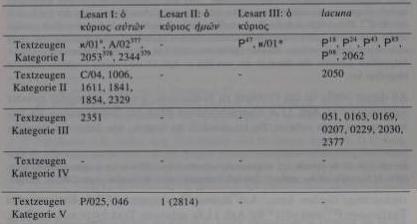 The first reading is “their Lord”; the second “our Lord”; and the third is simply “Lord”.

However, the omission of the personal or possessive pronoun αύτών in reading III, which could then be interpreted as a deletion, can hardly be explained; a scribal error must be considered very unlikely; the assumption of a deliberate, theologically motivated omission would remain the only possible explanation for the absence of the pronoun αύτών between the words κύριος and έσταυρώθη in P47 and α/01*. But why should a copyist delete the designation of the κύριος as the Lord also of the two μάρτυρες – or as the Lord of all Christians, as reading II wants to suggest – and thus then formulate it considerably more imprecisely, especially since their characterisation as μάρτυρες μου [my witnesses] in Apk 11:3 has led numerous commentators up to the present to interpret these two figures precisely as witnesses of Christ or God? . . . .

The text ὅπου καί ό κύριος έσταυρώθη offered by the textual witnesses P47 and α/01* for Apk 11:8c has to be regarded as the original text of Apk 11:8c, even contrary to the results of the analysis of the external attestation of the different variants, since this reading represents both the lectio brevior and the lectio difficilior at this point. This reading, in turn, can be easily reconciled with the identification of the two witnesses with the leading representatives of the people of Israel, specifically Palestinian Jewry. (W, 93f – translation)

Other questions remain and we’ll take up some of those in the next post.

3 thoughts on “The Two Witnesses of Revelation 11 – part B”