We continue following Thomas Witulski’s case for dating the book of Revelation in the time of emperor Hadrian and the Bar Kochba war. Before attempting to place the events of chapter 11 (the measuring of the temple and the two witnesses) in a historical context W undertakes to closely examine the text in order to be clear about what it does and does not say.

Revelation 11:3 And I will give power unto my two witnesses, and they shall prophesy a thousand two hundred and threescore days, clothed in sackcloth.”

4 These are the two olive trees and the two candlesticks, standing before the God of the earth.

6 These have power to shut heaven, that it rain not in the days of their prophecy, and have power over waters to turn them to blood, and to smite the earth with all plagues, as often as they will.

7 And when they shall have finished their testimony, the beast that ascendeth out of the bottomless pit shall make war against them, and shall overcome them and kill them.

8 And their dead bodies shall lie in the street of the great city, which spiritually is called Sodom and Egypt, where also our Lord was crucified.

10 And they that dwell upon the earth shall rejoice over them and make merry, and shall send gifts one to another, because these two prophets tormented them that dwelt on the earth.

11 But after three days and a half, the Spirit of life from God entered into them, and they stood upon their feet; and great fear fellupon them that saw them.

12 And they heard a great voice from Heaven, saying unto them, “Come up hither!” And they ascended up to Heaven in a cloud, and their enemies beheld them.

13 And that same hour there was a great earthquake, and a tenth part of the city fell; and in the earthquake were slain seven thousand men, and the remnant were seized with fear, and gave glory to the God of Heaven. (KJ21)

Well known to the readers

The two witnesses are introduced with the definite article τοῖς “which suggests that they were known as eschatological figures or ciphers to both the apocalyptist and his audience or readers” (W, 45, translation):

As well-known figures (the article τοῖς is not missing in any manuscript) the two witnesses are introduced here without any mention of them in the Apok so far. (Haugg, 13f – translation)

The time specification of verse 2 “for forty-two months” corresponds to that of verse 3 “1260 days”. The two witnesses are introduced as a definite quantity with a definite article. Apparently, the author presupposes that the reader understands him, which means that he alludes to a familiar idea. (Müller, 208f – translation)

However, the apocalyptist does not name them even though it appears they are well-known to his readers. By avoiding a clear identification the author appears to be allowing himself room to reinterpret their role. The references to Jerusalem in the opening verses of this chapter and again in verse 8 (W will make his case that “where also our Lord was crucified” is original to the text and not an interpolation) indicate that the two witnesses will appear in the area around Jerusalem, certainly in Palestine. END_OF_DOCUMENT_TOKEN_TO_BE_REPLACED

Like Loading...
And there was given me a reed like unto a rod; and the angel stood, saying, “Rise, and measure the temple of God and the altar, and them that worship therein. But the court which is outside the temple, leave out, and measure it not, for it is given unto the Gentiles; and the Holy City shall they tread under foot for forty and two months. — Revelation 11:1-2 (21st C KJV)

Immediately following the above verses comes the account of the “Two Witnesses”. In Thomas Witulski’s view Revelation was composed in the time of Hadrian and the years of the Bar Kochba revolt, that is between 130 and 135 CE.  Previous posts have covered how he explains the trials of the seven churches, the four horsemen of the apocalypse, the emergence of two beasts, one of them identified by the number 666, in the context of major events in the eastern Mediterranean world during the times of Trajan and Hadrian. It’s time I covered Witulski’s analysis of Revelation 11.

Before attempting to decide how a passage fits events around the time of writing, W takes a close look at what, exactly, the text appears to be saying.

A significant point that stands out in W’s discussion is the notice that the author who is given the command is never said to carry it out. He does not measure anything.

He is told not to measure the outer court because it is given to the gentiles. He is then told that the Holy City shall they tread under foot for forty and two months.

The treading down of the holy city is introduced as a future event. The measuring of the temple and the instruction to leave out the outer court is all present tense. The outer court is given to the gentiles — now, at the time of the instruction; but the news that the holy city is to be trodden down is introduced as something that is yet to happen. W concludes that the 42 months duration of the treading down of the holy city is not part of the present time in which the measurement is expected to take place and in which the outer court (only, not the entire temple or city) is given to the gentiles. Here is an adapted version of W’s explanatory table: 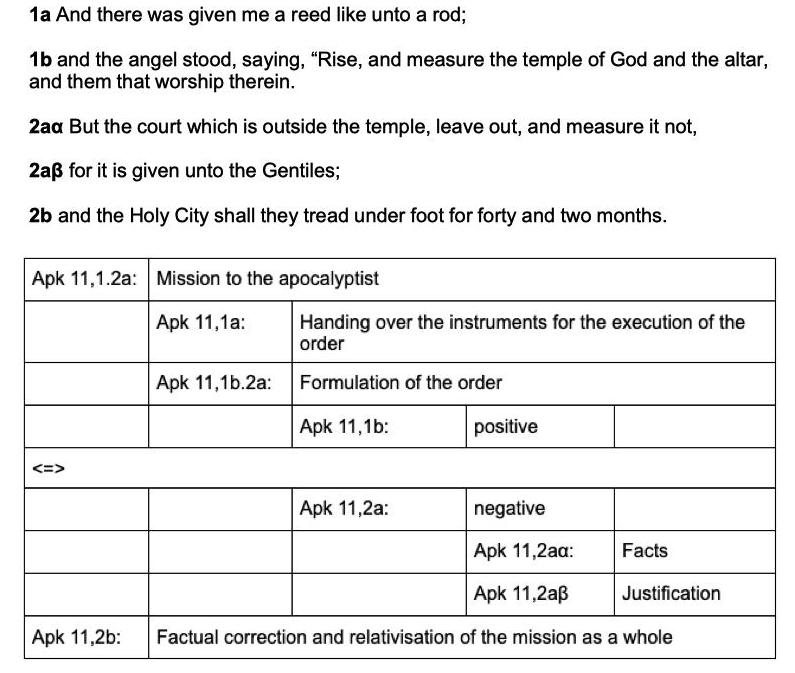 We do not read that all of the city except for the temple will be trampled underfoot by the gentiles for 42 months but that the city — implying the whole city — will be trodden under. The “holy city” is holy because the temple stands there. Without the temple it is not holy. W cites Dulk:

This sentence is unintelligible if the first part of the text is construed to mean that the temple will be preserved. If the holy city is trampled, that includes the temple. The text does not state that the rest of the city will be trampled, but simply that the city (without exception) will be trampled. Moreover, the city at issue is the ‘holy city’. What makes the ‘holy city’ holy is precisely the presence of the temple. It is hard to see how this sentence could be otherwise construed than with the implication that the whole city, with as its central element the temple, will be trampled. (Dulk, 441). — (in part cited by W, 26)

The reference is to the Septuagint (Greek) of Zechariah 12:3

And it shall come to pass in that day [that] I will make Jerusalem a trodden stone to all the nations: every one that tramples on it shall utterly mock at [it], and all the nations of the earth shall be gathered together against it.

By replacing “Jerusalem” with “holy city” the author of Revelation is reminding readers of the temple and emphasizing that the temple itself will be included in the destruction (W, 27). Compare Joel 3:17 (4:17 in LXX)

. . . ye know that I am the Lord your God dwelling in Zion, My holy mountain. Then shall Jerusalem be holy . . .

W concludes that the measurement that is announced and whatever is implied by it will be overtaken by the fact that everything about it will be destroyed.