Skip to content
To the angel of the church in Pergamum write: . . . I know where you live—where Satan has his throne (Revelation 2:13)

This post continues from The Doctrine of Balaam and the Nicolaitans. We are looking at the arguments of Thomas Witulski for dating the final book of the New Testament, the Book of Revelation, to the time of the emperor Hadrian. (Though the last book in the NT canon, I think there are good arguments for suspecting it may have been one of the earliest NT books written – but that’s another subject.)

What was the Throne of Satan (θρόνος τοῦ σατανᾶ) in the city of Pergamon?

In research, the question of what or which sanctuary might have been in the apocalyptist’s mind when using the term θρόνος τού σατανά is extremely controversial. (250f — all references are to W’s Die Johannesoffenbarung Und Kaiser Hadrian and all quotations are translations)

Through 25 pages with most of the text in small print and lengthy footnotes W. addresses the pros and cons of the many proposals:

However, here I will cut to the chase and announce “the winner”. It is one that another scholar, Yarbro Collins, had rejected despite all the points in its favour simply because it is “too late”. In W’s view, the throne of Satan was a reference to the giant statue of Zeus Philios, king of the gods, seated on his throne within a stunning temple complex overlooking the city. [This is not the same temple for Zeus Soter included in the above list. That temple was small and lower down on the hill.] The temple of Zeus Philios was consecrated in the year 129, the time of Hadrian. W accordingly sets 129 as the earliest Revelation would have been written.

Justifications for W’s identification of the Throne of Satan with the statue of the enthroned Zeus Philios:

Due to the discovery of a seated statue of the deity Ζεύς Φίλιος/Iuppiter Amicalis, it can be considered certain that this sanctuary was explicitly dedicated to the deity Ζεύς, which is to be assumed as the real basis for the interpretation of the figure of the σατανάς [=Satan]. This deity was worshipped there independently and not in a roundabout way as a means of identification for the Roman emperor. Thus the utterance οπού ό σατανάς κατοικεί [= where Satan dwells] Rev 2:13 together with its implications can easily be connected with the sanctuary dedicated to Ζεύς Φίλιος/Iuppiter Amicalis and the princeps Trajan. Furthermore, it is of crucial importance that the statue of the Ζεύς Φίλιος/Iuppiter Amicalis is a seated statue of obviously considerable dimensions.247 The seat on which this statue was placed can in turn be easily understood as the θρόνος, on which the σατανάς is enthroned as an interpretation of the deity Ζεύς Φίλιος/Iuppiter Amicalis in the presence of the Emperor Trajan standing before him and also in the presence of the people visiting the temple.248 This takes into account the meaning of the θρόνος term used in Revelation. Finally, reference should be made to the enormous dimensions of the sanctuary of the Ζεύς Φίλιος/Iuppiter Amicalis and the princeps Trajan and his position dominating the Pergamenian acropolis, the entire city and its surrounding countryside. This explains extraordinarily well that the apocalyptist located the θρόνος τού σατανά precisely in Pergamon and transferred the residence of the σατανάς to this city of all places.251 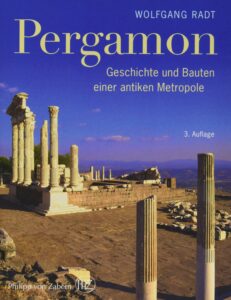 247 Cf. on this Radt, Pergamon, 210: “More recently, parts of the colossal seated statue of Zeus Philios were unexpectedly found among previously unnoticed sculpture fragments from the Trajaneum [= Temple of Zeus built by Trajan]. Although these pieces are cruelly smashed, the identification is clear. They include a part of the bearded head and a fragment of the abdomen”.

248 Cf. the description of the sculpture group erected in the temple in Radt, Pergamon, 212: “The original cult owner Trajan had thus approved a cult sculpture group that showed himself, as an armoured commander, standing next to the enthroned [!] Zeus“. The depiction of this group of cult images can also be found on Pergamene coins (cf. Pergamon, 212), so that it can be well explained that the apocalyptist, who possibly did not live in Pergamon, also became aware of this group of cult images through the coins. However, it is just as conceivable that he saw it himself or that it was described to him by eyewitnesses.

251 Cf. on this here developed reference of the term θρόνος του σατανά also Klauck, Sendschreiben, 161 : “The temple of Trajan, visible from afar and enthroned on the mountain top, would make an excellent candidate [for the identification of the θρόνος του σατανά] in terms of the image”. For Klauck, this sanctuary, since he holds to the writing of Revelation in Domitian times, cannot be considered as a reference point for this term. Cf. also 161, A. 34. The reference of this term to the temple of the Ζεύς Φίλιος/Iuppiter Amicalis and of the princeps Trajan is also considered by Taeger, Streitschrift, 300: “[…] – whereby, by the way, the Trajaneum would lend itself particularly well to the ‘throne of Satan’“, and by Yarbro Collins, Pergamon, 172f; . . . .

Three images of the remains of the Temple of Zeus constructed by Trajan: 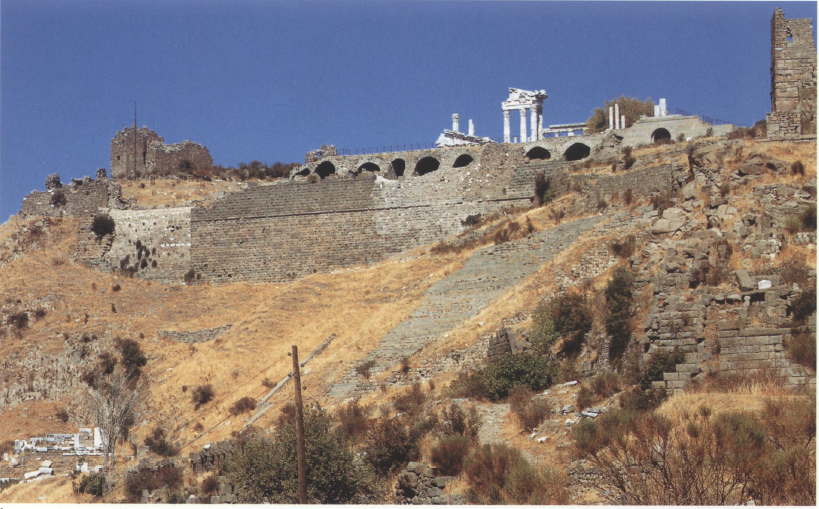 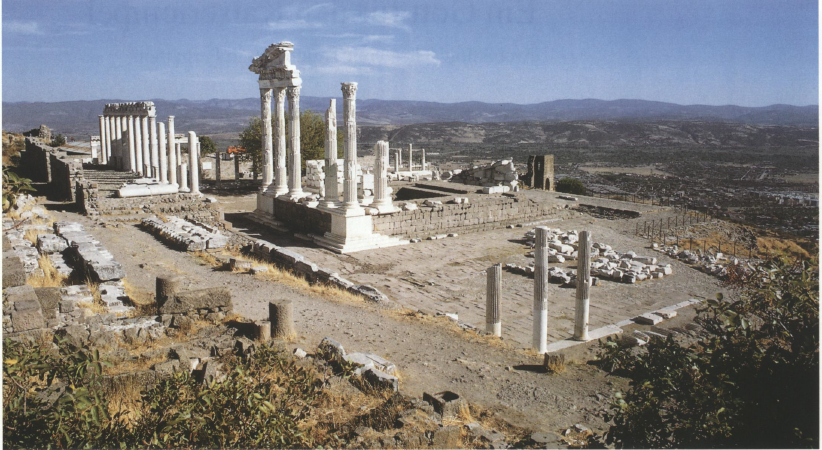 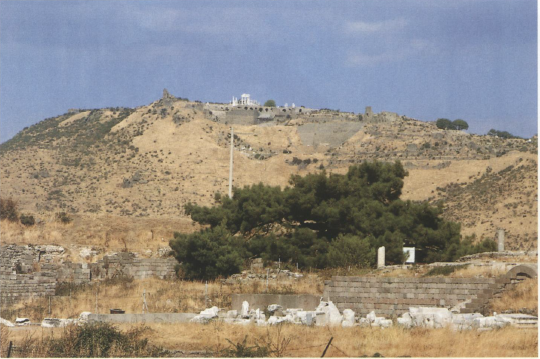 One thought on “The Throne of Satan in Revelation”