We have seen how emperor worship directed towards Hadrian in Greece and the Roman province of Asia surpassed anything before known: Emperor Worship and the Book of Revelation. The “advent” and “presence” of an emperor, a divine figure, meant salvation for all in the region. As Horace wrote of Augustus:

Great guardian of the race of Romulus
Bom when the gods were being good to us,
You have been absent now
Too long. You pledged your word
(The august Fathers heard)
To swift home-coming. Honour, then, that vow.

Restore, kind leader, to your countrymen
The light they lack. For, like the sunshine when
It’s springtime, where your face
Lights on the people, there
The weather turns to fair
And the day travels with a happier pace.

When Caesar’s here the ox plods safe and sound;
Ceres and gentle Plenty feed the ground
With fruitfulness; across
The uninfested seas
Men speed with bird-like ease;
Honesty is afraid of its own loss;

No immoralities contaminate
Domestic faith, for custom and the State
Have purged the taint of sin;
Proud wives in children trace
The true inherited face;
Crime hears the tread of Justice closing in.

Who fears the swarms that Germany brings forth
From her rough loins ? Let Scythians in the north,
Or Parthians rearm,
Or the wild tribes of Spain
Rally to war again,
We sleep as long as Caesar’s safe from harm.

As Pliny wrote of Trajan’s return:

20. Now did the longing wishes of Rome recall you, and the more fond affection, you bore your Countrey, oversway’d that love, you had shewn your Souldiers. So that now you return, yet with so strict a Discipline, with so little of forrage, plunder or other abuse, as if you came from a regular peace, rather than from a tumultuous War: And, though it seem too trifling to add to your commendation, I cannot but observe, that no Father, no Husband fear’d the injurious effects of your return. . . . . There was no grievance in the pressing of Carriages, no nicety in the taking up of lodgings, no trouble in the catering of dainties for your entertainment. . . .

22. How long hop’d, how wish’d for was that day when at your return you past in publick through the City? Nay the very manner of your solemn March how gratefull, how obliging? . . . . No age, no infirmity, no different Sex was debar’d from the common benefit of glutting their eyes on that welcome and unusual sight. Children were taught to know you, young men pointed, old men admir’d, and even those, whose sickness had confin’d ’em to their beds, or chambers, contrary to the advice of their cautious Physicians, came forth, and seem’d confident, that the bare influence of so blest an object would complete their recovery. Some were content now to dye, since they had liv’d to see, what they had so long prayed for: Others were the more eager to have their lives prolong’d as knowing it would be some comfort to live under the Protection of so excellent a Government. Women thought it now some joy to be made Mothers, since they saw to what Prince they brought forth Subjects, and what a long prospect of happiness was thereby entail’d on their Children. The tops of houses were all cover’d with spectatours, who climb’d and hung over at that venturous rate, as if they were just falling, yet for crouds of company below were not likely to come to the ground. The streets were throng’d on either side, and scarce a narrow lane left for your passage. The multitude from all quarters discharg’d loud peals of joy, and thundred from every part in shouts and acclamations: While this rejoycing at your return, being as universal, as the benefits of it, grew still greater, as you march’d farther, and advanc’d along with every step you made. (From https://quod.lib.umich.edu/e/eebo/A55147.0001.001/1:5?rgn=div1;view=fulltext)

The presence of the emperor was the only decisive requisite for security, material prosperity, even rightly restored nature, the rule of morality and ethics in public and private life, proper reverence for the gods, justice and peace (paraphrased from Witulski, Kaiserkult in Kleinasien, p. 163). To translate the words of Jean Beaujeu in Religion romaine (p. 203) quoted by Witulski in Kaiserkult (p. 138)

The official institution of the double cult of Hadrian-Zeus Olympios (Panhellenios) in Greece [und mutatis mutandis also in Western Asia minor], considered within its framework, constitutes a creation as powerful and calculated as that of the cult of Rome and Venus in Rome; unexpected, but part of a long tradition, original, but composed of pre-existing elements, the formula, launched with great festivities and monetary orchestration, aims in both cases to provoke a psychological shock, to shake up routine, to increase confidence, euphoria, creative energy, by opening the doors to a new era, by promising and arousing prosperity and solidarity.

Hadrian did not merely “pass through” Asia.

This reconstruction [of Hadrian’s three journeys through Asia] proves first of all that Hadrian travelled the province of Asia – like the entire Roman Empire – far more intensively than any of his predecessors. In addition, the intention of Hadrian’s three stays in the province of Asia must be fundamentally distinguished from that of Vespasian’s and Trajan’s stays there: while the latter two merely visited the province of Asia in transit, for Hadrian the focus of interest was on the Asian cities themselves, their welfare and the internal stabilisation of the imperium Romanum that this welfare provided. (Kaiserkult, p. 155, own translation in all quotations of Witulski.)

Recall that Hadrian’s cult was, unlike those of his predecessors, tentacled throughout the cities of the province with organized intent as part of the new institution of the Panhellenion. His temple was for the worship of Hadrian alone without being coupled with the greater Zeus and his altars were to be set up in every private home.

Hadrian was propagated as a universal saviour throughout the entire Roman province of Asia and far beyond by 132 AD (Kaisekult, 169)

The Revelation of John

It is against the above background that Thomas Witulski dates Revelation between ca 132 and 135 CE.

And after him shall rule
Another man, with silver helmet decked;
And unto him shall be the name of a sea;
And he shall be a man the best of all — Sib. V 47

Reading Revelation through the perspective of these years, one of the first details we notice relates to the first beast arising from the sea and the second from the land:

Revelation attributes the first beast’s power to a dragon:

Hadrian completed the Olympieum at Athens, in which his own statue also stands, and dedicated there a serpent, which had been brought from India. — Cassius Dio, LXIX, 16,1

Again recall from our earlier post that Hadrian was worshiped as one who was assimilated into Zeus. The dragon or serpent as Zeus and Hadrian were worshiped as a merged divinity.

The “blasphemy” uttered by the beast that Revelation speaks of can be related to six aspects of Hadrian’s rule (Johannesoffenbarung, 221):

We have an inscription from the time documenting Hadrian’s initiation into the mysteries of Demeter and Persephone at the sanctuary at Eleusis. As for the pressure to install altars to Hadrian in private homes throughout Asia it may not be too much of a stretch to see here a waging of war against Christians.

The author of Revelation may well have known of the claims we now read in the Sibylline Oracles about Hadrian being Nero redivivus. I posted the details at Hadrian as Nero Redivivus so I won’t repeat them here.

The writer of Revelation declared in amazement: Who is able to make war with the beast? (Rev 13:4). Hadrian was renowned for his peaceful reign, with but one exception. Details of Pausanias’s account of the times of Hadrian were taken from an inscription dedicated to the emperor on the Pantheon:

. . . and within my own time the emperor Hadrian, who was extremely religious in the respect he paid to the deity and contributed very much to the happiness of his various subjects. He never voluntarily entered upon a war, but he reduced the Hebrews beyond Syria, who had rebelled. As for the sanctuaries of the gods that in some cases he built from the beginning, in others adorned with offerings and furniture, and the bounties he gave to Greek cities, and sometimes even to foreigners who asked him, all these acts are inscribed in his honor in the sanctuary at Athens common to all the gods.

Without war, Hadrian and his worshipers may indeed have been able to say that he had been…

given authority over every tribe, people, language and nation (Rev 13:7) 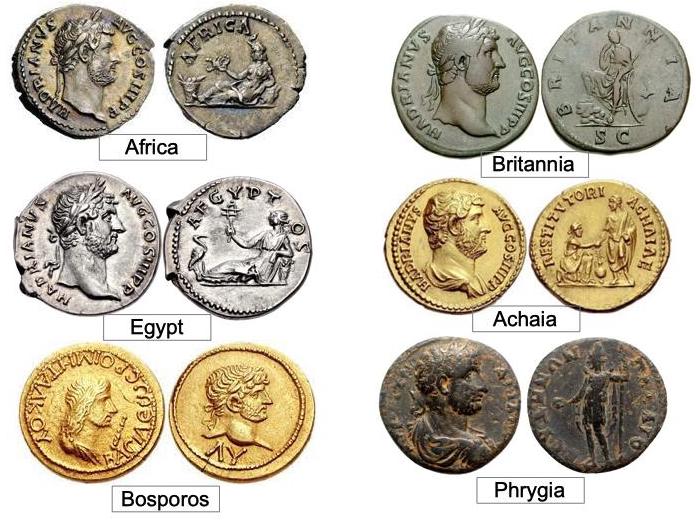 His coins minted marks of the many provinces of the empire that he visited with each identified by a particular cultural feature. These were propaganda media to demonstrate Hadrian’s “saving power” over the “whole world”.

Likewise, the travel commemorative coins minted after the completion of the second inspection trip visibly propagated for the whole world the stability of the imperium Romanum and the real and secure rule of the princeps Hadrian over πάσα φυλή καί λαός καί γλώσσα καί έθνος [=every tribe, people, language and nation]. Also against this background, the statement in Rev 13:7b can be related casually, possibly even more accurately, to Hadrian’s reign and to the conditions in the period between 132 and 135 AD. (Johannesoffenbarung, 225)

In the next post we’ll look at the “second beast”, Hadrian’s propagandist Philemon.