They’re recruiting. Superficially relatively innocuous-looking groups like the Lads Society are their first ports of call. But their conversations have been infiltrated so we can be alerted to the threat:

Transcript page: The Base Tapes

AdvocateCannibalism: I got more enjoyment watching Saint Tarrant do his thing, but I’ve eaten several meals watching that.

Will T Power: It was harder and harder to speak out about it for fear of losing my political career.

Sherman: Well National Socialism is the world view of the eternal truth.

Rooreich88: I’ve seen and experienced and talked to enough Muslims to just know I f**king hate them.

Nazzaro: So what’s your ethnicity?

Other information online related to the above podcasts:

“Revealed: The True Identity of the Leader of an American Neo-Nazi Terror Group.” The Guardian, 24 Jan. 2020, http://www.theguardian.com/world/2020/jan/23/revealed-the-true-identity-of-the-leader-of-americas-neo-nazi-terror-group.

US Neo-Nazi Group “The Base” Is Recruiting Members in Australia. https://www.vice.com/en/article/7k9gja/neo-nazi-group-the-base-recruiting-in-australia.

Another discovery of long-forgotten dabblings of mine, again from the 1990s when I was (a) sorting out my investigations into the biblical accounts of the resurrection with an interest in seeing how matching or contradictory they were; and (b) experimenting with new software I had purchased for my primitive Windows PC. They make me cringe now but they’re my history. Here is the first one. 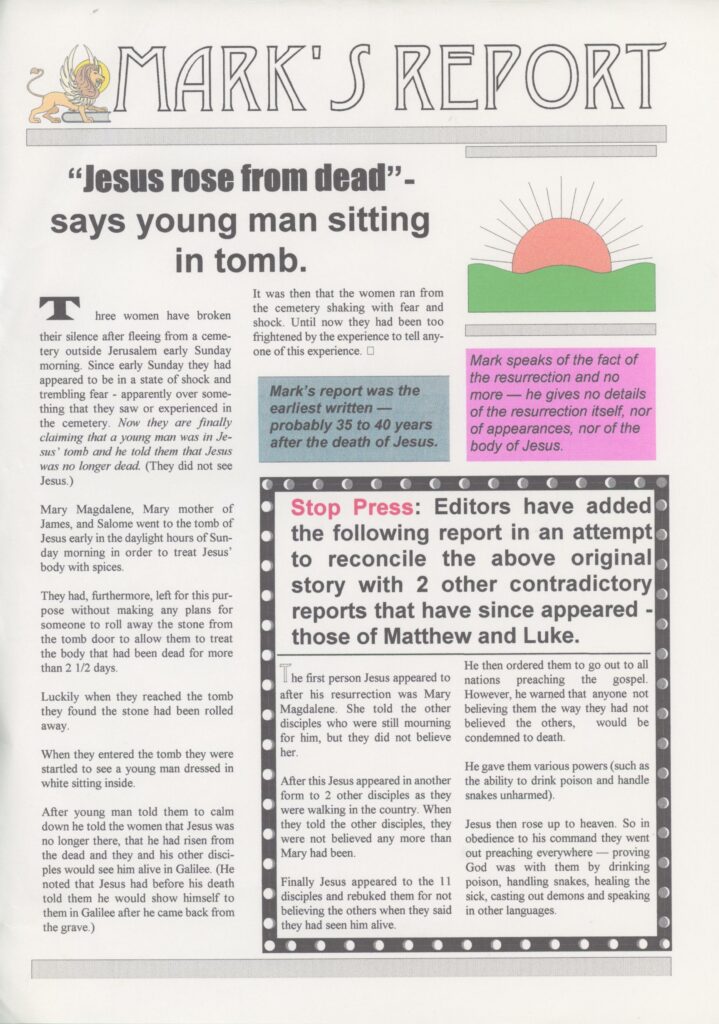 Let’s continue looking at Rivka Nir’s proposal that the John the Baptist passage in Antiquities of the Jews was not part of Josephus’s original work. We continue from John the Baptist’s Place in Josephus’s Antiquities. But be warned. I get sidetracked and explore the broader evidence for both Christian and Jewish views on divine retribution for killing prophets and especially focus on the story that appears to have been the paradigm for all such accounts — the murder of Zechariah in 2 Chronicles.

In my previous post the point was made that the John the Baptist passage appears to have been dislocated from where it would more naturally fit. That is, we have this flow of thought ….

Rivka Nir suggests that the more natural place for Josephus to give the supposed reason for Herod’s defeat would be between #3 and #4 above.

Rivka Nir also points to the discrepancy between the gospel’s dating the death of John to the time of Jesus (presumably about 30 CE or a little before) and the Josephan account that is set at 36 CE. “How could Josephus claim that the Jews credited Herod’s defeat to John’s death, which preceded it by six years?” (p. 44) But I wonder why the gospel timing of JB’s death should be taken as any more authoritative than Josephus’.

Further, the idea that Herod was defeated in war as divine punishment for unjustly killing a figure prominent in the Christian tradition reminds us of later Christian authors — Hegesippus, Origen and Eusebius — blaming the fall of Jerusalem on the unjust execution of James the brother of Jesus. Nir sees both accounts — the unjust murders of John the Baptist and James the Lord’s brother — as “presumably based on the causal relationship created by Christian theology between the Jewish rejection and crucifixion of Jesus and the temple’s destruction.”(pp. 44f)

I was interested in the evidence for the early Christian authors promoting this idea of a causal relationship between the crucifixion of Jesus and the fall of Jerusalem so followed up as many of Nir’s citations as I could. Here is what I found (all bolded emphasis is mine): END_OF_DOCUMENT_TOKEN_TO_BE_REPLACED