Where did the gospel characters come from?

Nanine Charbonnel [NC] presents a case for the parabolic or symbolic character of the gospels. In the second chapter of the second part of Jésus-Christ, sublime figure de papier, we see how narrative figures who appear as historical persons are best explained as symbols of collective groups. We have seen how in the Jewish Scriptures individuals in a story represent nations: e.g. In Hosea the person Israel stands for the whole of Israel; Abraham and Sarah being expelled from Egypt prefigure the Exodus, and many other cases can be cited.) Here are NC’s thoughts on some Gospel figures.

This couple represents the Jews of the Temple.

Zechariah (=YHWH remembers). In the Protoevangelium of James (or Infancy Gospel of James) Zechariah, the father of John the Baptist, is slain by Herod for refusing to reveal where his son John was hidden. In the Jewish Bible the same name is martyred by the king Joash. Joash had been hidden safe from the murderous Athaliah by the father of Zechariah, the priest Jehoiada, but forgot his kindness and had his son Zechariah stoned (2 Chronicles 24:17-22).

Elizabeth is said to be descended from Aaron in Luke 1:5.

In the time of Herod king of Judea there was a priest named Zechariah, who belonged to the priestly division of Abijah; his wife Elizabeth was also a descendant of Aaron.

These sisters are drawn from Naomi and Ruth in the Book of Ruth. They represent the Jews and the gentile converts. The gentiles preceded the Jews.

Since the Middle Ages much there has been much discussion about how their roles act out the superiority of the contemplative over the active life. But that meaning was far from the mind their original creator, says NC.

“Call me not Naomi [that is, Pleasant]. Call me Mara [that is, Bitter], for the Almighty hath dealt very bitterly with me. (Ruth 1:20)

The fourth evangelist changed Naomi-Mara of Bethlehem to Mary of Bethany (=house of affliction (or figs)).

Jesus gently chides Martha for her busyness and commend Mary for having chosen the appropriate response to his presence. Martha is eclipsed by Mary just as the Mosaic covenant with its preoccupation with works of the law is eclipsed by the way of “a good heart and prayer”. This is how it was with Naomi and Ruth.

The two women divide their tasks. After years in Moab Naomi-Mara hears that there is bread to be found in Bethlehem (=house of bread) so she rises and returns. Once back home there, she sits in the house while Ruth gleans for bread. Finally, she sits Ruth down to find her a husband. The author of the Gospel of Luke has transferred these attitudes to “anyone who agrees to listen to the story of Israel”. Mary-Mara is sitting down because one day earlier she got up and one day again she will get up. Martha-Ruth is busy with food because one day (a different time) she sat down to listen to the Torah and another day she will be seated to listen to it again. Mary and Martha, like Naomi and Ruth, are living out the Feast of Weeks, Pentecost, the gift of the Torah, the permanent gift of the Word . . . .

(More paraphrase than translation of Marie Vidal, Jesus and Virounèka, 2000, p. 168, quoted in NC 228f. The link is to an Amazon page with a description of the book. Use Google Translate to convert it to English.)

The Hemorrhaging Woman and Daughter of Jairus 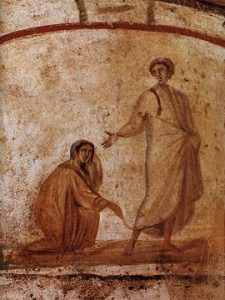 Setting aside those interpretations that see here symbols of the shed blood of the Jews through their several destructions, or even the blood of their daily sacrifices, NC finds what for her is a more satisfying explanation by a comment of Origen in relation to the controversial Ethiopian wife of Moses.

Aaron and Miriam murmured against Moses when he took an Ethiopian wife (Numbers 12:1). The “new Moses” also took an Ethiopian: the Law was passed over by the Ethiopian — that is, the Church. Origen drew the link with the Greek (Septuagint) version of Psalm 68 (67) when he wrote in his Homily on the Song of Songs:

And having once made mention of an Ethiopian, I want to summon a Scriptural witness about this word too. Aaron and Mary murmur against Moses, because Moses has an Ethiopian wife. Moses weds an Ethiopian wife, because his Law has passed over to the Ethiopian woman of our Song. Let the Aaron of the Jewish priesthood murmur, and let the Mary of their synagogue murmur too. Moses cares nothing for their murmuring; He loves His Ethiopian woman, concerning whom it is said elsewhere through the prophet: From the ends of the rivers of Ethiopia shall they bring offerings, and again: Ethiopia shall get her hands in first with God [Ps 68:32]. It is well said that she shall get in first; for, as in the Gospel the woman with the issue of blood received attention before the daughter of the ruler of the synagogue [Matt 12:42], so also has Ethiopia been healed while Israel is still sick. By their offence salvation has been effected for the Gentiles, so as to make them jealous.

I thank “Paul the Uncertain” for clarifying this point in his comment below. In my original post I now believe I mistook NC’s explanation. See Paul’s comment below for further detail.

The hemorrhaging women clutches at the fringe of Jesus clothes, that is, at the fringe that is the reminder of the law (Numbers 15:38-40). In the Psalm as interpreted by Origen the Ethiopian would stretch out their hands first to God. The implication for such interpreters was that the Jewish people would be healed after the gentiles. The gentiles were healed while Israel was still sick.

One finds the same message in the parable of the prodigal son: the elder brother, representing the Judeans, is preceded in conversion by the one who was deemed the sinner, the one representing the gentiles.

The Samaritan Woman at Jacob’s Well

NC offers us a different perspective. Yes, the meeting of Jesus with the Samaritan woman at the well is a typical courtship setting. It’s where marriages were contracted (recall Isaac and Rebeccah, Jacob and Rachel, Moses and Zipporah … and see the 2007 Vridar post addressing the same romantic motif, Novelistic plot and motifs in the Gospel of John).

Commentators have identified the Samaritan woman’s five husbands with the five books of the Pentateuch. After all, the Samaritans recognized no books apart from those five as sacred. In the scene of John 4 the well of the meeting is noted as “Jacob’s well” (John 6:4) — we are at the place of the beginnings of the people of Israel. So what is happening here? The Samaritan woman surely reminds us of a branch of Israel who broke their covenant with God. What we have here, suggests NC, is

the ideal of a messianic reconciliation between Jews, where the most impossible things can happen, since we are transported to the end of time.

The Jewish or Israelitish people, both Jews and Samaritans, are united in Jesus.

The traditional image of Mary Magdalene is that of the sinner, the prostitute. Prostitution was a stock image of idolatry or sinfulness in the Old Testament. If Mary Magdalene was originally thought of as a prostitute it is a small step to see her origin as an allegory of sin. If the virgin Mary, mother of Jesus, represents the “new Eve” or mother, then the sinful Mary represents the “old Eve”. But we see that the Magdalene repented.

7 thoughts on “The Symbolic Characters in the Gospels: Personifications of Jews and Gentiles”